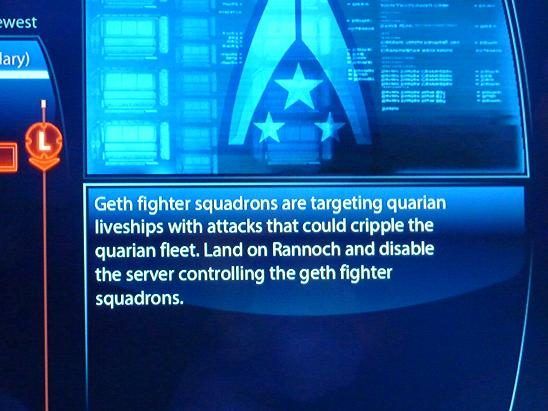 In order to stop the geth fighter squadrons I had to be, like, uploaded into the server that was controlling them and inside I needed to destroy the reaper code within. It was a neat mission that allowed me to witness some of the geth’s history through their eyes. I’ll say it again: stupid quarians. What arseholes. Poor gethy-poos. All they wanted was to serve their masters, and WHAT DID THEY GET? Death. They received death. In a nice pretty present with a pink bow on top. 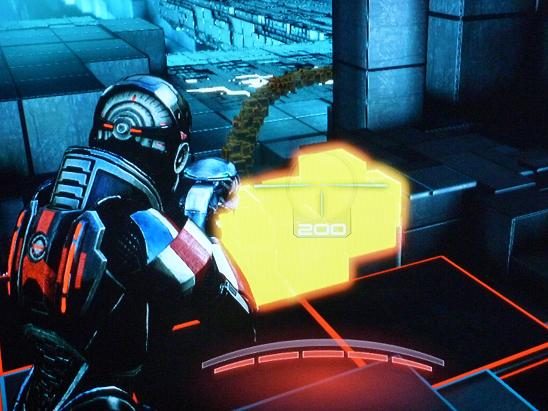 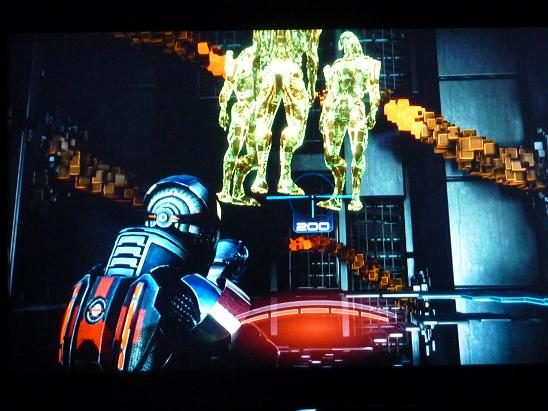 After destroying the code with my badass code-destroying gun, I awoke from whatever slumber Legion had put me in and was promptly greeted by dozens of self-aware geth primes. Oh, wonderful. I absolutely hate those fucktards for they are extremely powerful and derive a great amount of pleasure from destroying me. But Legion told me that thanks to my actions we could all now be friends. AKA they’ll help fight the Reapers. Uh, thanks buddy. BUT I’M WATCHING YOU, YOU PRIME BASTARDS! 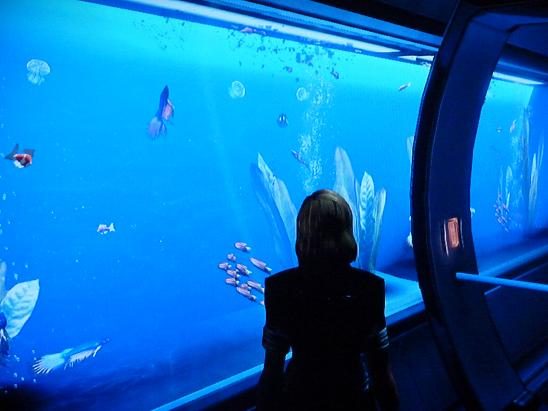 I headed back to the Normandy and took pride in the fact that my fish are all still alive. This may or may not be because I purchased an automatic fish feeder from the Citadel. >_>

But it was time to head to Rannoch. We located the Reaper base that was controlling the geth, but jamming towers prevented us from “orbital bombardment”. Therefore, true to Mass Effect fashion I needed to land on Rannoch (like, place my two feet on the ground instead of keeping them safe in spaceship) and use a “prototype targeting laser to enable the Normandy to destroy the Reaper base.” WOOHOO! Yeah baby, give me the big guns! ::happy dance:: 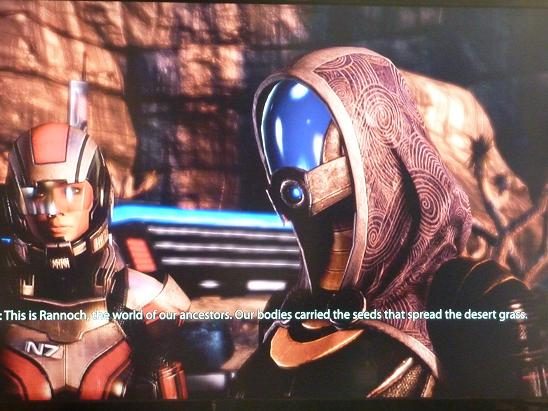 Tali became all sentimental because for the first time EVAR she was standing in her home world. I humored her for a while like a good commander, but then it was time to blow some shit UPPPPP!!! And I proceeded to do so until I got a nice look at the base I wanted to destroy.  MUAHAHAHA—….

….You know that unfortunate moment when you realize the base you just tried to destroy is actually a live Reaper? Man, don’t you just hate it when that happens? It kind of puts a kink into your plans. Because now you have to, like, destroy a Reaper. 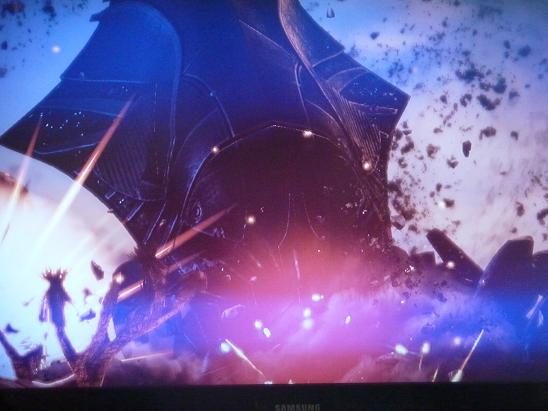 So, yeah. I had to partake in an epic laser battle with it. I can’t tell you how many times that damn thing zapped me – WHICH results in instant death — until I realized I needed to lock on with my own “prototype targeting laser”, dodge the reaper’s laser and lock on again until the Normandy, or the fleet, or whatever it was received the lock-on information and spewed missiles at it.

I (somehow) managed to kick its ass. 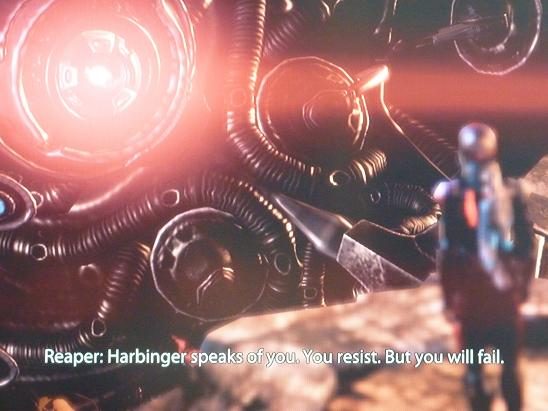 With the Reaper destroyed, one would think everyone would gather around a quaint little campfire on Rannoch and celebrate. But oh no. OH HELL NO. Instead I was immediately faced with a grueling decision.

I could upload the Reaper update program into all geth, which would turn the geth into badass mudda-fuggers. And because the geth can now think and act for themselves they would prove to be fantastical assets to the war effort. Also, the poor geth have never had a chance to actually “live” and their shitty life was all because of the quarians.   But if I uploaded the code the Geth would destroy the quarians, which A) Would suck balls B) Did I mention the geth would destroy the quarians? C) Sever my relationship with Tali. On the other hand, if I didn’t upload the code the quarians would wipe out the geth. Legion would hate me. And I’d feel TERRIBLE. 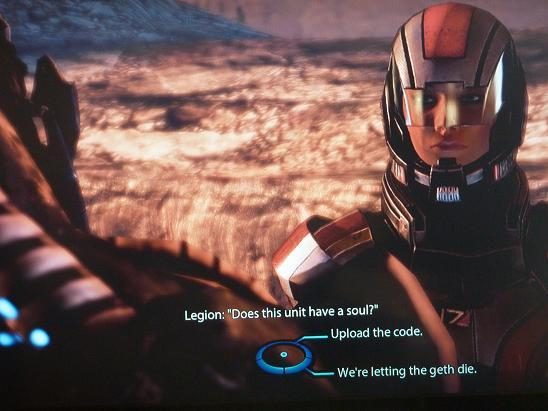 Guys, I sat on my couch for about fifteen minutes while frantically searching the internet and reading my guide book for advice. I about shat myself when I discovered there was a peaceful solution if AND ONLY IF you met very specific requirements. I dug into it further and I read that one of the requirements was that you needed to destroy the Heretics in Mass Effect 2.

Since I wasn’t going be blessed with the option of chosing the peaceful decision, the only thing I could do was to side with the quarians. I hated the idea of it, but the geth had tried to, you know, kill me before (not their fault, I know) and I had been with Tali since the beginning. I liked Legion, and saw where he was coming from, but it all comes down to favorites.

Well, this was it — I was going to destroy the geth. I squealed, closed my eyes and pressed A. I swear pressing that damn button never felt so wrong in all of my history of button pressing. And I have a pretty extensive history of pressing buttons.

I waited for the sound of explosions, the wailing cry of the burning geth…BUT!!! BUT! OMFG BUT!!!!!!!!!! I WAS GIVEN ANOTHER CHANCE! AND MORE IMPORTANTLY, DIFFERENT DIALOUGE OPTIONS!!!!! 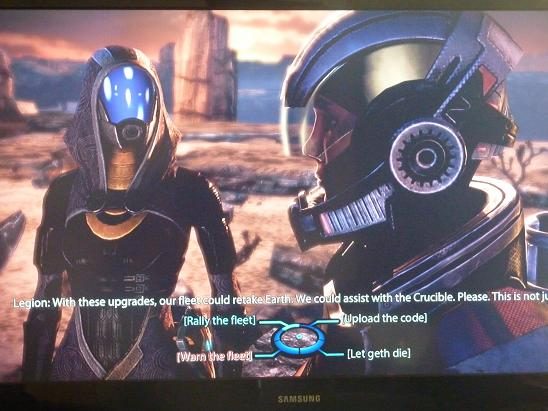 As it turns out, the option to make a peaceful decision is based off a point system regarding prior decisions. For example, keeping Tali alive Mass Effect 2 earns you two points, but if Tali died in ME2 you won’t earn ANY points, etc. You have to land between the 5-7 point range. Therefore rewriting the Heretics only modified my points; it didn’t screw me over.

I chose to rally the fleet, but even then I was a little worried that the quarians weren’t gonna listen. 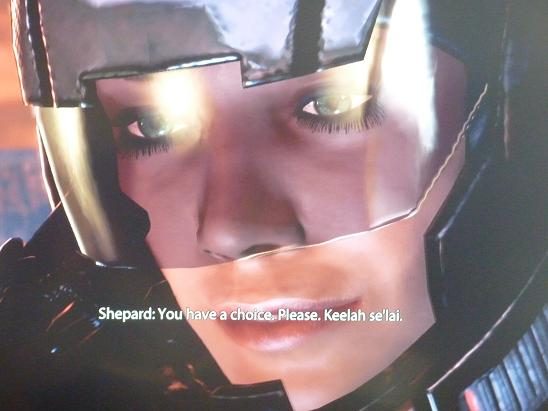 But to my surprise, they listened, and with that I ended the quarian/geth war. DAMN I’M GOOD. Or I should say Shepard is good. But I guess I control Shepard therefore I am good to some extent.

Legion then proceeded to commit suicide — something about giving the rest of the geth intelligence – but honestly at this point I’m numb to characters dying off. Seriously. First Mordin, then what’s-his-butt reptile man (SEE I ALREADY FORGOT HIS NAME) OH – Thane, and now Legion. They’re dropping like friggen’ flies. 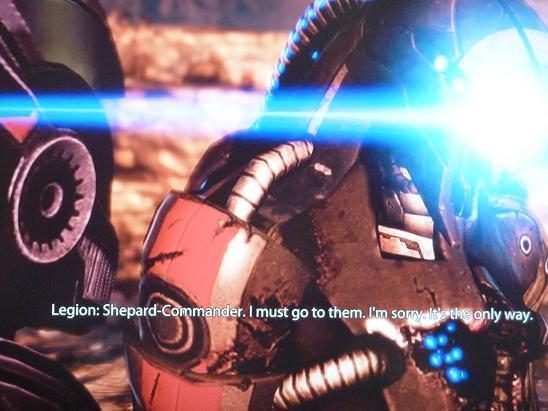 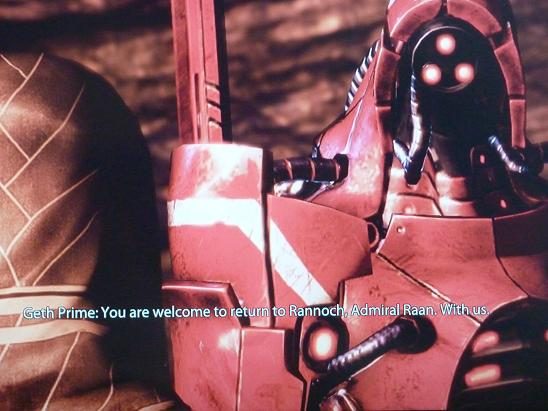 A big ol’ honkin’ Geth Prime stomped over to all of us and invited the quarians to live on Rannoch with the geth. Now if that doesn’t cause warm and fuzzy feelings to brew inside your innards I don’t know what will.