I think Bioware is trying to tear Kaidan and I apart. Not only do they cocktease me with limited appearances by this man I’m supposed to be faithful to, they then throw a woman in my cabin and give me the option of showering with her.

So Kaidan and I, you know, have this thing. In fact, we just confessed our undying love for each other. (Don’t be jelly, brah.) But before that momentous milestone, I hadn’t seen him in a while, so I had been getting innocent pleasure out of chit-chatting with my crew aboard the Normandy. I HAD TO FILL THAT VOID SOMEHOW. /cry

One night I received an email from Specialist Traynor. 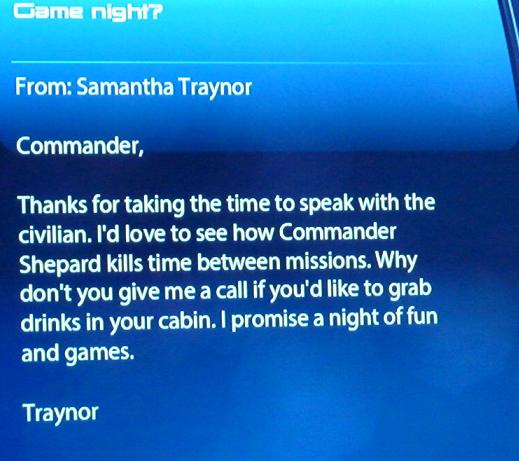 Ahem. Now to me, this screams “BOOTY CALL!” I mean, c’mon. If this was IRL and someone texted me that they wanted a night of “fun and games” AND alcohol, I’d know what I was in for.

I headed up to my cabin and invited her up, but I was determined to turn this into a “friends only” event. Not a “friends with benefits” event — because let’s face it — those hardly turn out well, and things were already complicated enough between Kaidan and I. When Traynor finally decided to haul her ass up to my cabin we started the evening with friendly chit-chat; she complimented my cabin (though I’m sure she was talking about another type of “cabin”, if you nah’msayin) and THEN, just like I expected, she dropped the ball.

She told me she really liked my shower.

Okay. I quickly realized where this was heading. She continued rambling on about something else, but I wasn’t paying attention. At that moment, if I possessed the ability to stick my being into Shepard’s, I would have ran out of that damn cabin screaming. But alas, I was merely presented with two dialogue choices: 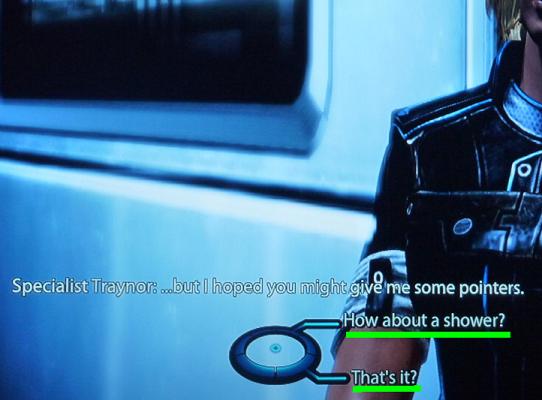 I could either offer her a shower, or I could reply to whatever the fuck she was saying with a “That’s it?” But here’s the thing: like I said, I didn’t know what Traynor was talking about and WHY it would instigate a “That’s it?” response from Shepard. What if Traynor had admitted that all she wanted to do was play some games? Or have a drink? Responding with a “That’s it?” would definitely be like saying, “Bitch please. I know you didn’t drag your ass up here for some Checkers and Jack. Let’s get down to business.”

BUT on the other hand, if I offered her a shower that’s would definitely be sending the wrong message. Or would it? I mean, people can shower without engaging in the nasty, right? I DIDN’T KNOW WHAT WAS GOING ON.

After many minutes of contemplating, I went to Google.

And, thanks to Google, I was able to work things out so that they remained friendly between us; I was able to avoid any potential scissoring and/or other sexual acts with Traynor, thus keeping the flame between Kaidan and I still alive.

::shakes fist:: I worked too damn hard to keep you, Alenko! FOR TWO GAMES I WAS FAITHFUL TO YOUR ASS. That’s, like, over sixty hours of commitment!

Damn. This relationship with Kaidan is starting to become more stressful than IRL relationships. ;)