Yeah, I thought you did.

My friends, I am writing this because I care about your well-being. I’m worried that the level of entertainment in your life isn’t quite up to snuff, and I am here to remedy that…for free! I know, I know. You can thank me later.

By now, I’m sure you’ve heard me squeal and rave over a radio drama called “We’re Alive”. If you haven’t, you obviously don’t follow me on Twitter and/or are new to my website—which is absolutely fine—it’ll just take a minute to learn you about the awesomeness.

Okay, first things first. Here’s what We’re Alive is about in a nutshell:

“A small riot in LA has spread past its containment. Three reserve soldiers are called to their deserted duty station. Believed to be the last remaining armed servicemen in the area, Michael, Angel, and Saul witness the true cause of the riot; people are starting to change and attack each other. Armed with only what they can carry, they set out to secure an apartment building and rescue survivors scattered amongst the shattered remains of civilization. In a world turned upside down, every day is a struggle, as those who have taken refuge in “the tower” find out that their safe haven is under constant threat. In this place, however, the strengths of those who stand together, might just be enough to live long enough to see things start to change.”

Guys, I’ll be completely honest with you; this description doesn’t do We’re Alive justice. Hell, I don’t think any description truly could.

For my gamer readers out there, this audio drama has the action of Left 4 Dead but the story and character development of a Bioware game. It’s that good.  The voice acting is phenomenal, as well as the integration of sound effects. Every action a character makes is represented through sound. If a character is sitting in a chair, you’ll hear it creak. If someone is running on concrete, the sound of feet slapping on concrete is spot-on.  There’s never  silence (unless it’s intended) and you’ll never be bored. Sometimes you’ll be sitting on the edge of your seat. Other times you’ll find yourself paralyzed. You may even find yourself shedding a tear…or two.

But if you won’t take my word for it, read what other fans have to say: 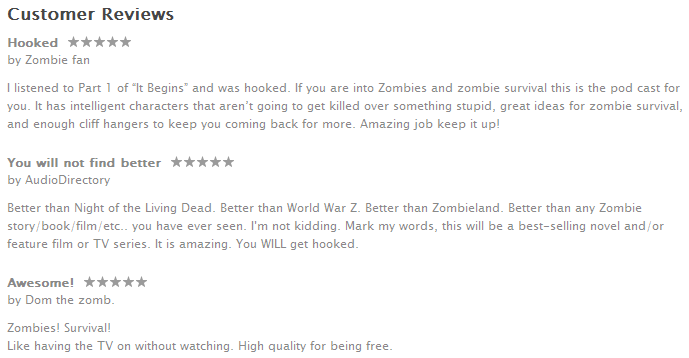 Still not convinced? Let me tell you—928 ratings can’t be wrong.

Have I mentioned We’re Alive is absolutely free? Listen the first Chapter right now. Let me know what you think. If you dig it (which I know you will) send me an email, and join Greg and I on the We’re Not Dead Podcast sometime. All we do is talk about We’re Alive and how amazing it is.