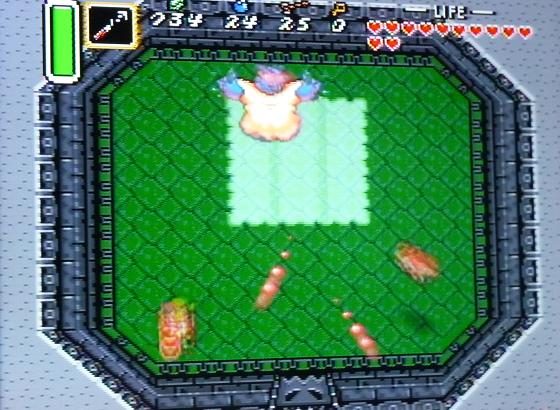 I tackled the Thieves’ Hideout with ease, but I gotta say it was a weird dungeon. Even the boss, Blind the Thief, was a weirdo. He, like, turned himself into a little girl and pretended to be one of the maidens and ONLY revealed himself to be a strange ass flying-ogre thing after I lead him into a sealed room with a patch of sunlight. Okay, dude, I don’t know what sick and twisted fetishes you’re into but keep them to yourself. Damn.

After hitting dude’s head with a blunt weapon enough he, um, blew up and died (they always blow up!) and per the norm a maiden appeared. 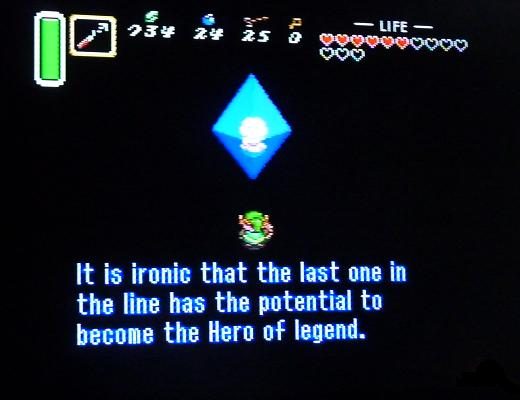 Of COURSE it’s ironic you dumb bitch. That’s the point of being the hero. Something is ALWAYS ironic. “Hmm, it’s ironic that a young boy who was content living his life as a normal child would turn out being the chosen hero who is burdened with the duty to save the planet…no, THE UNIVERSE!!!!”

Before tackling Skull Woods there were two sidequests I wanted to complete. The main reason I completed Thieves’ Hideout before the suggested Skull Woods was because I wanted to upgrade that pathetic excuse of a metal/steel/aluminum tinfoil/whatever thing Link called a sword. Now, in the Light World Homeboy A was missing his blacksmith-partner-in-crime and therefore he couldn’t upgrade my sword.  Thus I embarked on an epic quest to find Homeboy B. I eventually found Homeboy B as a, erm, frog in the Dark World surrounded by skull rocks. 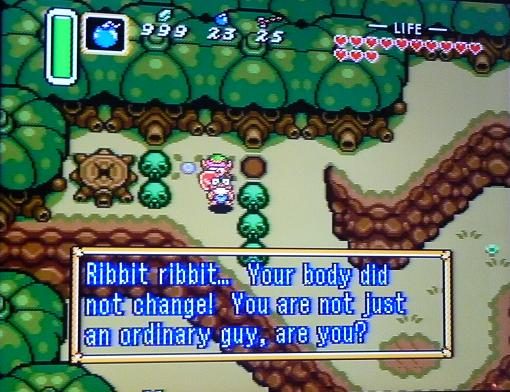 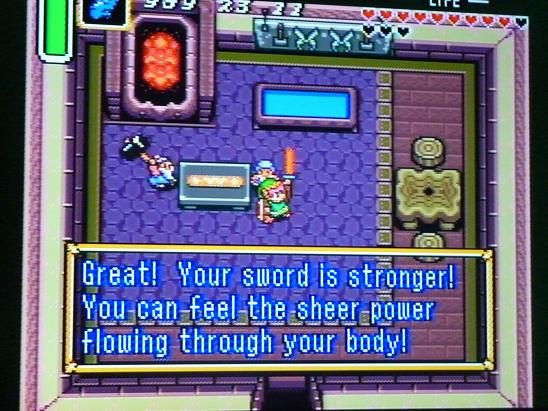 YEAH! Not only does it look more badass, it makes a badasser sound when Link swings it. <3.

I then found a random treasure chest in the Blacksmiths’ shop. What does one do with a random treasure chest? Well, my friend, one brings it to a weird looking dude with a SICK head of hair sitting by a sign. This guy told me he used to be a thief and he would open the chest for me BUT ONLY if I promised not to tell anyone about his past!!!11 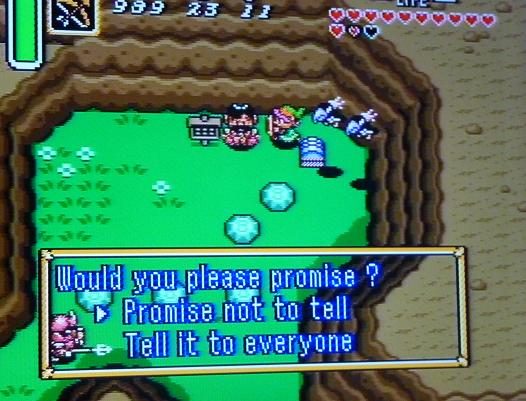 Riiiiiiight. In any case, inside was a “Magical Bottle”! But I don’t understand what’s so magical about it. It holds things. Doesn’t every bottle do that?

Next was Skull Woods, and I vividly remember this dungeon from way back when because I would always get lost due to the multiple entrances. But thankfully I have this thing called a GUIDE in which I like to utilize when my patience runs thin due to this thing called being EPICALLY LOST. 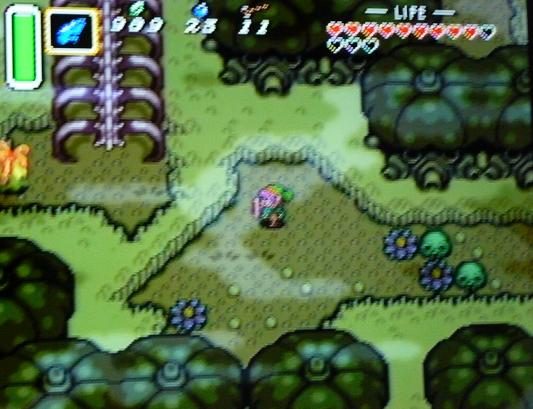 Other than getting lost, though, Skull Woods AND its respective moth boss weren’t much of a challenge so I was in and out of there faster than…well, I’ll leave that up to your imagination. Afterwards – you guessed it – another maiden appeared and spoke to me through her crystal. Kinda weird – it’s kinda like if a baby was born in its…okay. I’m SO not going there.

Anyway, this is what she had to say:

“Do you know the prophecy of The Great Cataclysm? This is the way I heard it…if a person who has an evil heart gets the Triforce, a Hero is destined to appear…and he alone must face the person who began the great Cataclysm. If the evil one destroys the Hero, nothing can save the world from his wicked reign. Only a person of the Knights of Hyrule, who protected the royalty of Hylia, can become the Hero. You are of their blood-line, aren’t you? Then you must rescue Zelda without fail.”

…“Then you must rescue Zelda without fail.”