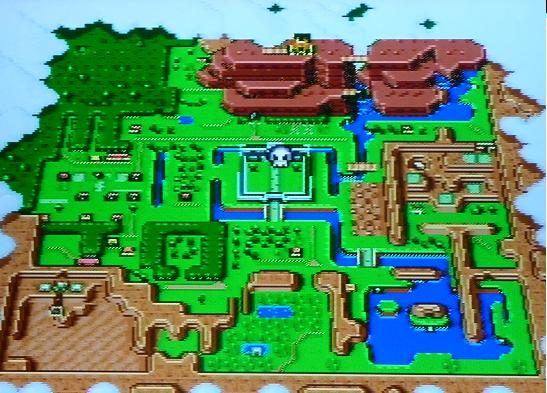 The first item on my agenda was to defeat Agahnim. But let’s stop right there. How the HELL does one pronounce that name? Agahnim? Aga-nim? Agahhhh-nim? Seriously, I’m sitting here trying to think of all of the ways to pronounce that weird ass name and I’m starting to embarrass myself. I think I’m going to assume the H is silent, which it probably is, but it’s throwing me off.  Anyway, moving on — I finally caught up with that bastard (I will forever hate him for killing the nice man who was protecting Zelda in the Sanctuary) and when I did, he, like, made Zelda disappear into abyss. 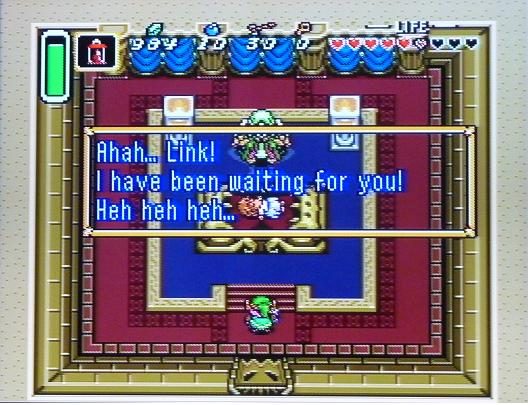 After making Zelda go “POOF!” he said it was only a matter of time before evil envelops this land, and once they have the Power of Gold shit would be cray. He then fled. And my fled I mean he floated into the room behind him via curtains. I followed, kicked his ass and he took me into the Dark World with him. Pussy.

Sahasrahla (yet another WTF name) somehow managed to get inside my brain. Once he was within my my brainial folds, he telepathically told me Agahnim had sealed away the seven maidens — descendants of the seven wise men — and because they have been sealed and tucked away into their own respective dungeons (how cute) the seal holding back the Dark World has been released. RUT ROH! He somehow managed to mark the locations of aforementioned maidens on my map. The first one took me to the Dark Palace. 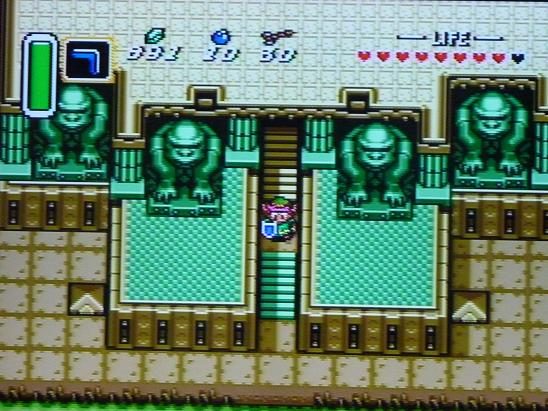 Even though I haven’t played this game in 17 years, I’m amazed with how much of it I remember! Hell, I even remembered Kiki the monkey — the greedy little bastard who made me pay 100 rupees just to get inside the temple.

Speaking of rupees, I thought it was odd that I had been able to accumulate 999 of those bad boys. I was thinking, WTF? What am I supposed to do with all of these? But I dismissed the thought and moved on. Inside the Dark Palace Zelda pretty much told me to hurry the FUCK up, and I also found the Magic Hammer. But, uh, the Magic Hammer was kinda pansy-like. It looked like Link was wielding one of those toy rubber hammers you give little spawnlets. 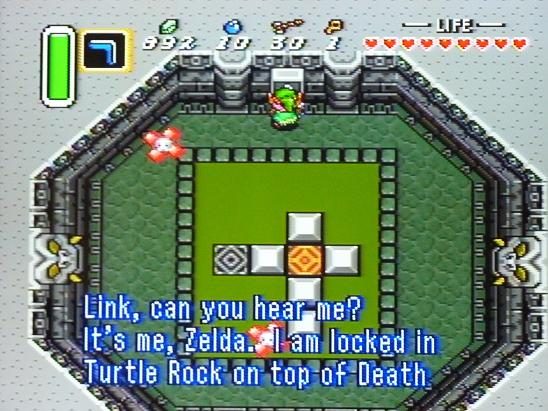 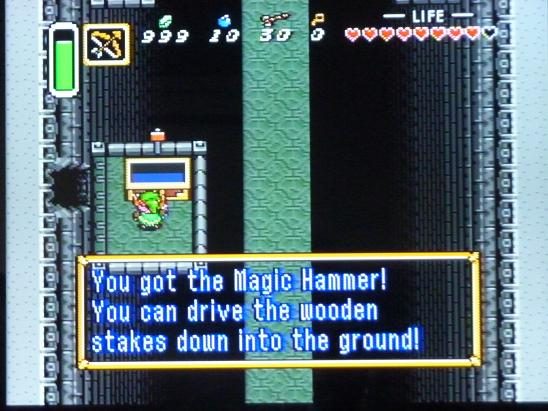 Eventually, I made it to the boss, whose name was Helmasaur (TOTALLY sounds like the evolution of Venusaur) and I say was because I was somehow able to defeat it by using  my rubber Magical Hammer to bust off his mask, which ultimately lead to the death of poor Helmasaur.

Afterwards a cute lil’ crystal holding a cute lil’ maiden appeared. She told me that Ganon is a thing and that he intends on building up all of his strength in the Dark World in order to wreak havoc on the Light World. Thankfully, it appears as if he hasn’t figured out a way into the Light World…yet. Miss Maiden was convinced that the combined strength of all of the other maidens would be enough to destroy the barrier surrounding Ganon’s hiding place.

Read: We’re going to destroy the barrier, but you’re going to have to trot on in there yourself and battle an epic enemey who, in all rights, should be able to squish you like a bug.