I know, I know — most original blog post title EVER. But I sorta-kinda have The Witcher on my mind and would rather spend what little brain cells I have on THAT bad boy instead of consuming them for a witty blog title. PRIORITIES, MAN.

So, as you may or may not know I had a photo shoot in my woman cave last Thursday not only for the Girls of Geek 2013 calendar, but for some promo shots as well. And before I go any further, let me just preface this by saying the photographer and hair/makeup chick not only were extremely fun to work with, but they were SO patient. I mean, by now I’d assume most of you guys know my personality. I’m NOT a girlie-girl and I’m typically not one to strut around in super high heels with a glitzy pink shirt and a bow in my hair. I consider myself one of the “brosephs”, so when I’m wearing a Mario costume and handled a Wiggler stuffed animal there’s no way in HELL I’m going to make that sexy. Oh no — I’m going to hump it and pretend like it’s a male body part commonly referred to as a penis. 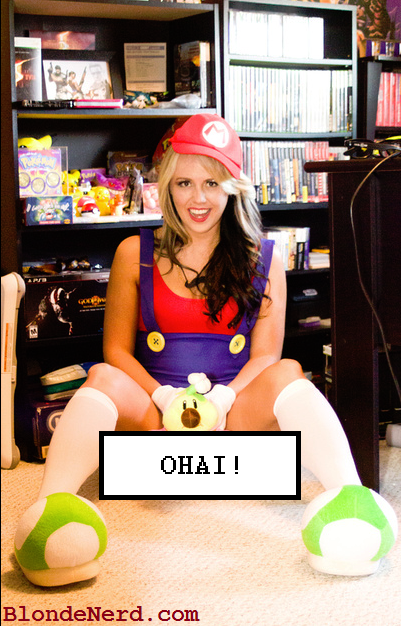 I AM NOT READY TO REVEAL MY CROTCH. Maybe someday I’ll remove the box — HA, see what I did thare? — and by “someday” I mean whenever an Alistair clone rides up to my front door on his gallant steed, sweeps me off my feet and proceeds to make babies with me. Also, he must not only guarantee he’ll make an appearance in Dragon Age III, but he must promise that his butterface is properly returned to the studliness that it was in Dragon Age: Origins.

Aaaand there I go running off with my Alistair fantasies….

Anywho, there were some fun shots taken and I’m excited to share ’em, but before I do I need to set aside photos for the calendar (I won’t be able to share those pics until the calendar releases) but whatever I don’t use shall be plastered on my site.

Now I must play The Witcher and loot shit.