Now that I finished my lovely ten-hour romp with Bayonetta, it is time to reflect. ::cue rocking chair::

Before I started Bayonetta, the following was all I knew about the action game:

“I know that she can kick serious ass, has pistols in her shoes (or something like that) wears a suit made out of…hair? Is that right? I could have sworn I read somewhere that she somehow gets nekkid and her hair is her weapon? What the fuck am I typing?” – Taken from my first Bayonetta log

HAHA. Of course that’s all I knew. Of coooouuurse.  #pervert

Bayonetta really surprised me. I ended up practically falling in love with the Bayonetta (the character) for her sassy attitude and insane sex appeal. I mean come on, have you seen her ass?! ;D But for serious, she easily makes my “favorite characters EVAR” list. She’s a strong, sexy female character that has a brain to boot.  From what I understand, though, the issue people had with Bayonetta wasn’t necessarily the character herself, but how she was over-sexualized—and from the tantalizing camera angles, her nekkid climax moves, not to mention the way she simply walks, I can see where people might be a little peeved. 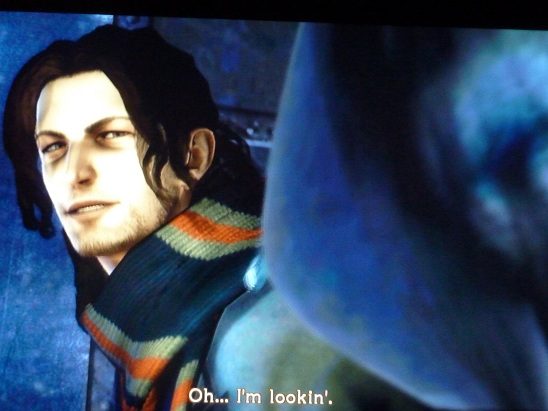 But holy hell, folks! This game is clearly supposed to be tongue-in-cheek. Let’s look at a few components of the game.

1)      For starters, upbeat, pop-esque music (that one might expect to hear during an anime intro) is played during Bayonetta’s first battle with the angels and is used again throughout the game. I’m pretty sure if Platinum was trying to set a serious tone they would have went with a mellower and darker music choice.

2)      When Bayonetta is injured, a flock of colorful butterflies emits from her body instead of, you know, blood.

3)      She has unrealistic proportions and walks in a way that makes me think of Shakira’s “Hips Don’t Lie” every time.

4)      She is always spotted toying around with a sucker…in her mouth.

Those are just a few examples, but I’m sure ya’ll get my drift. So, taking those aforementioned points into consideration, I can’t see why anyone should be “shocked”  when camera angles focus between her legs, above her ass, on her chest OR when she “climaxes” and looses all clothing minus swirling bits of head hair that cover her naughty bits.

::points to self:: I am Team Bayonetta.

Other than loving the character, I’m loving that I embraced by pansiness and changed the difficulty level to easy. It needed to happen. I didn’t die by enemies for the rest of the entirety of the game, but I DID die because of bad camera angles and missed button prompts. Le sigh.

Bayonetta 2 has been confirmed (although to the best of my knowledge information regarding it hasn’t been released) aaaand I’m definitely interested in a sequel! Where will they take the story? Seeing as I barely understood this one as it is, I can only make vague guesses. Perhaps it’ll involve Bayonetta as the Left Eye and someone will try to revive some other crazy God. There could also be co-op with Jeanne!

And that’s all I got. Arkham City is calling.