Well, I’m kind of in the same boat as I was before I played the first inFamous. I know nothing about the sequel. I only bought it a few weeks ago after discovering I was practically in love the first. Actually, I had planned on playing an epic JRPG after finishing inFamous, but guys, the ending WAS SO FUCKING GOOD. There is no way I’m putting the sequel off.

I’m assuming the story will follow Cole again (unless another Ray Sphere shows up and says ohai) but this time it’ll follow him in a different city (a few of you have given me the name of this place, buuut I don’t remember what it was). My guess is Zeke will make an appearance—or follow Cole wherever he ultimately goes. Trish is worm fodder, so there won’t be any of her. But I expect there to be some Moya, maybe Sasha, Alden…any other baddies I missed…OH! I can’t remember where, but someone told me Cole’s brother makes an appearance. I didn’t even know he had a brother. It’d make sense; or at least give him good reason to visit another city. Perhaps he’s working with the government and they’re having him investigate something?

Either way, I’ve heard nothing but good things about inFamous 2. I’ve been told it’s a vast improvement on the first in every aspect. I’ve also been told the ending will blow my mind. AGAIN.

…I can’t take too much more of this mind-blowing stuff, guys.

I had NO idea infamous was over two years old until I started infamous 2. HOLY BALLS what a difference! The graphics, gameplay, controls….im-prove-MENT! Since there weren’t any fancy schmancy cut scenes in infamous—just the comic stylized ones–it was pretty exciting to see some amped-up graphics, not to uhhhh mention an amped up Cole. Mmmm.

Now, I know a lot of you prefer Cole’s new voice over his old, gravely deep-as-fuck voice from the first game, buut to be honest I think he sounds like someone fresh off of grandpa’s farm. Whether you want to classify him as a Superhero or not, he’s something of the sort, right? He’s not the type of hero to lurk around and attack stealthy; he’s balls-to-the-wall. So I had no issue with his first voice. It was badass. He was badass. That being said, I feel like this new voice makes Cole a little more relatable and makes him appear more…human. More emotion carries within this voice than the first, and since it’s not as super-heroy Cole is more personable, almost more vulnerable. Dunno if that was Sucker Punch’s intention or not, but that’s the vibe I’m getting. 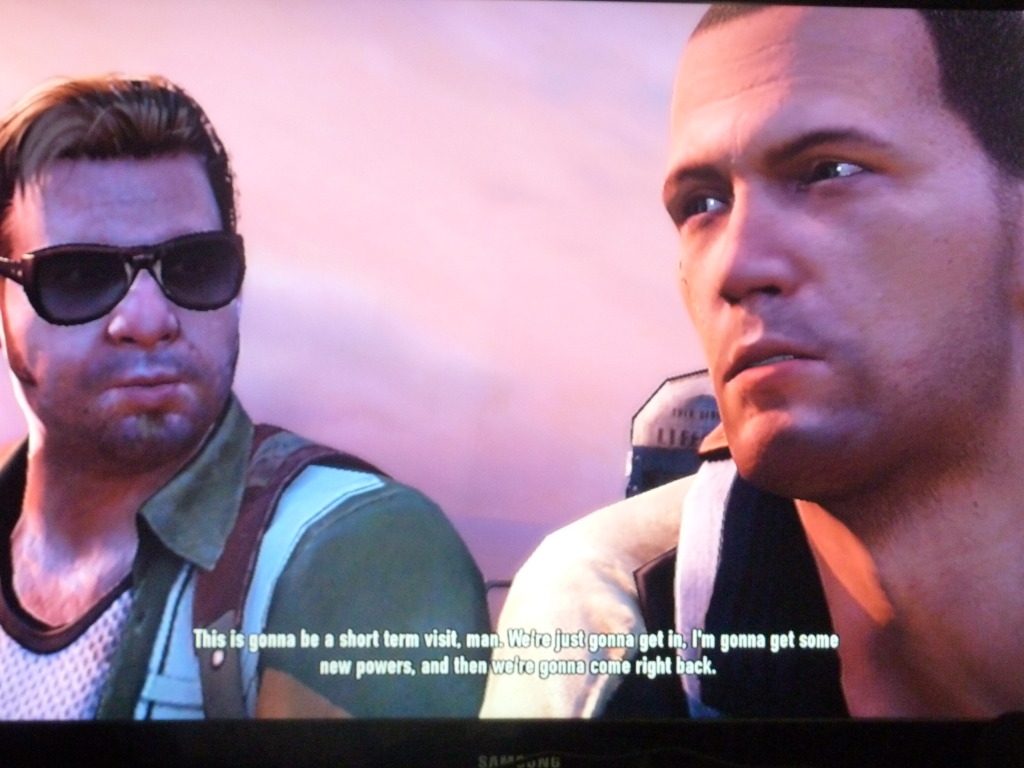 OH, speaking of Sucker Punch: WTF dudezors?!!? I spent close to a million hours protecting Empire City and you not only decide to introduce the crazy Beast thing, you also have it destroy the city within seconds! BAAAAAAH. ::shakes fist:: All that effort for naught. Le sigh. So, yeah, Empire City is toast, and now I’m onto New Marais. Looks like it was quite the party town, but now the “militia” is pulling a Dustmen/Reaper thing.

Its been a few days since I played inFamous 2, so my memory might be a little rusty. I remember stumbling across a TV with this Bertrand dude on it, pledging to protect the public from the “freak” and “abomination”, at the cost of their freedom…or something like that. Pretty much this guy has imposed harsh martial-law on the peeps. Have I been introduced to the first baddy?! Me thinks so. What I don’t know is what role this guy plays, or more importantly, if he’s working for anyone.

This doctor dude, Wolfe I believe, had…something…a version of the Ray Sphere (?) that allowed Cole’s powers to improve. Unfortunately my memory is foggy as HELL as who is who and how they are related to the story, but Kuo (chick from the NSA) and him seemed to be in cahoots—OH! Okay. Dr. Wolfe worked on the Ray Sphere for Kessler. That’s right. Apparently he can help Cole further his powers. I REMEMBER EVERYTHING NOW.

Long story short, the Beast is following Cole and company, destroying every city in its path. Lovely. 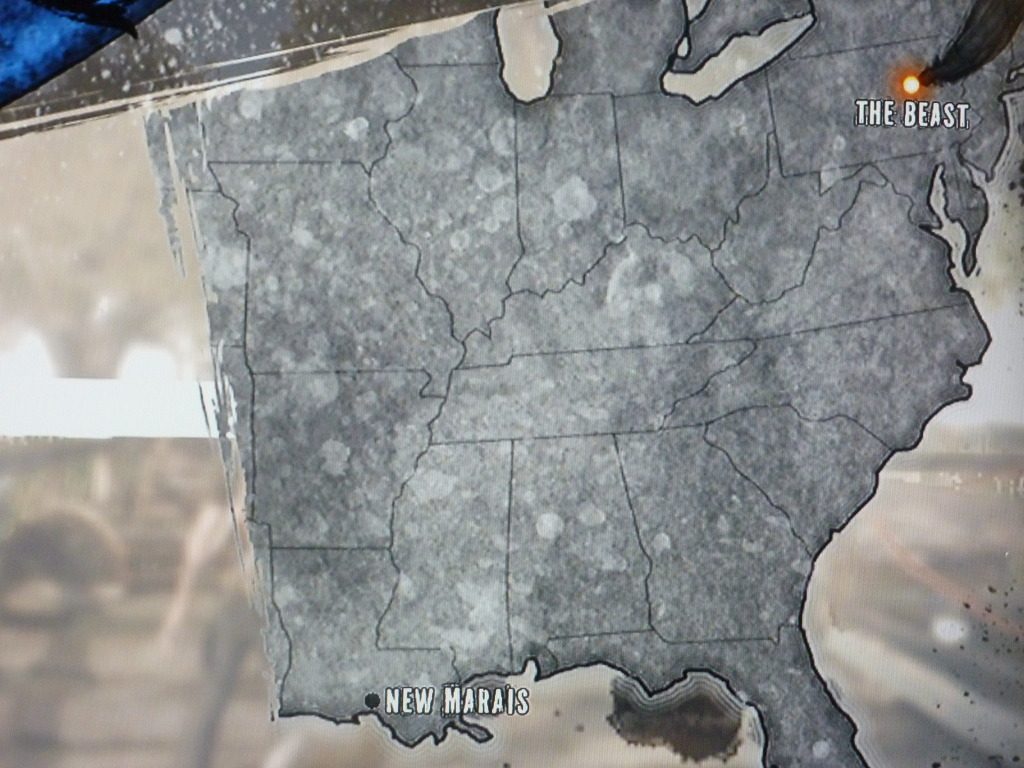 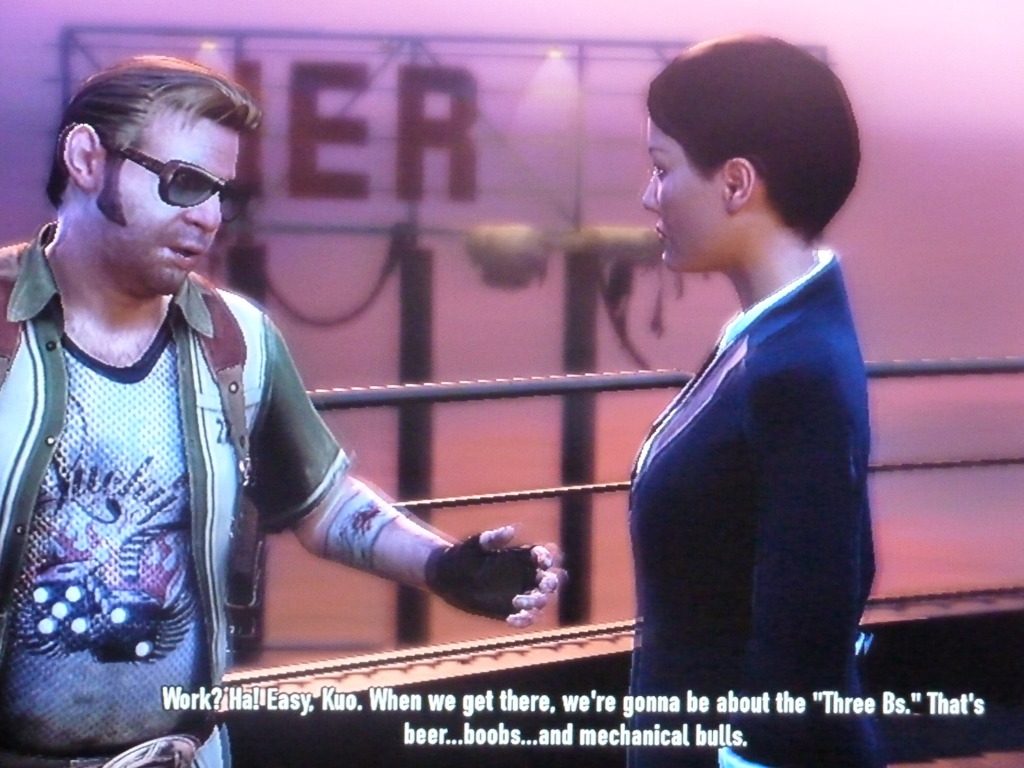 Also, Cole said that Zeke will do whatever it takes to mend their friendship so they can be as close as they once were. He also made Cole that Amp thingy. So, as of right now Zeke is on my “<3” list. If he messes up, or starts whining, he’s going back on my “</3” list. YOU HEAR ME, ZEKE?!

So, this Kuo lady…she and Cole? HMMMM? It’s only been months since Trish’s death (or something like that) but hey, a dude’s gotta get some! Or maybe she and Zeke will hook up. THAT WOULD BE HILARIOUS. Or maybe I’m just grasping at straws for some sort of romance plot. I keep forgetting this isn’t a Bioware game.

Finally, I’m bummed the option to watch comicy-cutscenes are gone. Dunno why those were omitted this time around, but it makes me a sad panda.

July 12th, 2011: Obai…For Now!
First of all, THANK YOU SUCKER PUNCH. Thank you for marking the courier pigeons on the mini-map. I didn’t learn much about the story in the first infamous because I’m a lazy bastard and didn’t want to seek each satellite out, but with these little poop-dispensers labeled I have no qualms seeking them out and knocking them down as they fly around a building. In fact, it’s quite satisfying.

I found out Kuo and John White both carry the conduit gene (or, “carried”, in John’s case). They worked together with Dr. Wolfe; John was assigned to Empire City, Kuo to New Marais. And according to this bitch on the news, what happened Empire City is now dubbed the “Empire Event”. The death toll is in the millions. 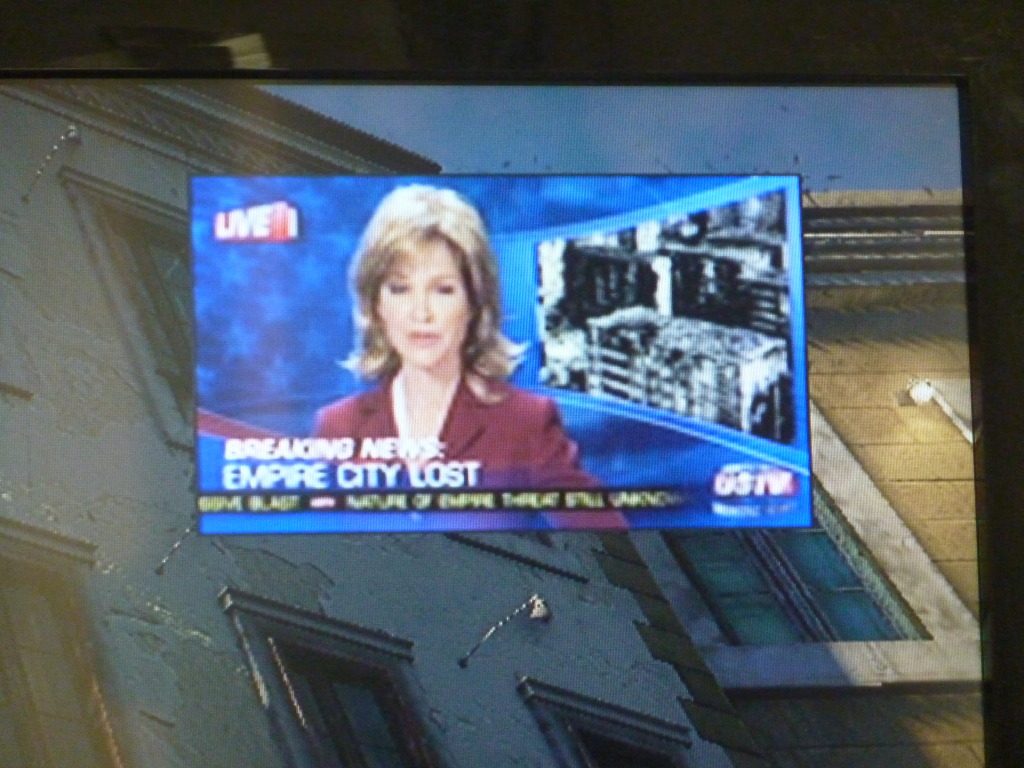 OH! Speaking of the news and bitches, I didn’t mention this on my infamous log, but I really wanted to kick that guy’s ass from the first game. Y’know who I’m talking about? That self-declared reporter who always popped up on TV? At one point I thought I would be able to confront him (Cole and Zeke had discussed it) buuuuut that never happened. Anyway, I hope his ass was torn from limb-to-limb and nom’d on by the Beast. That is all.

But I spent most of my time preventing muggings, completing side quests and doing good for the people of New Marais. I even raised my karma. DAWWWW. 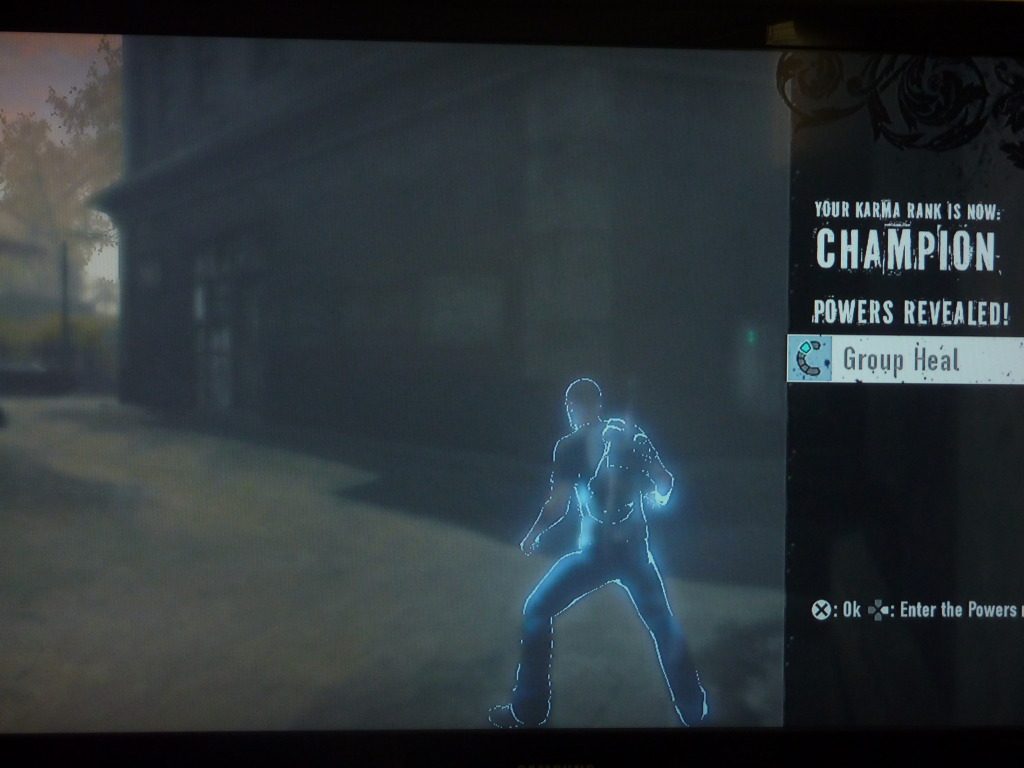 The next thing on my agenda is to confront Bertrand and see where Dr. Wolfe is—he’s giving a speech tonight and afterwards I’mma fuck his shit UP! Or something like that. This guy is effin’ crazy…

“I didn’t join the First Sons for the betterment of mankind. I joined them because I want powers! God has a purpose for me. That I might better myself and use my gifts in his name. Besides, I’m tired of waiting. I’ve already assembled the prisoners, the Ray Sphere. It’s already in motion. Tonight, I will become the sword of God.” 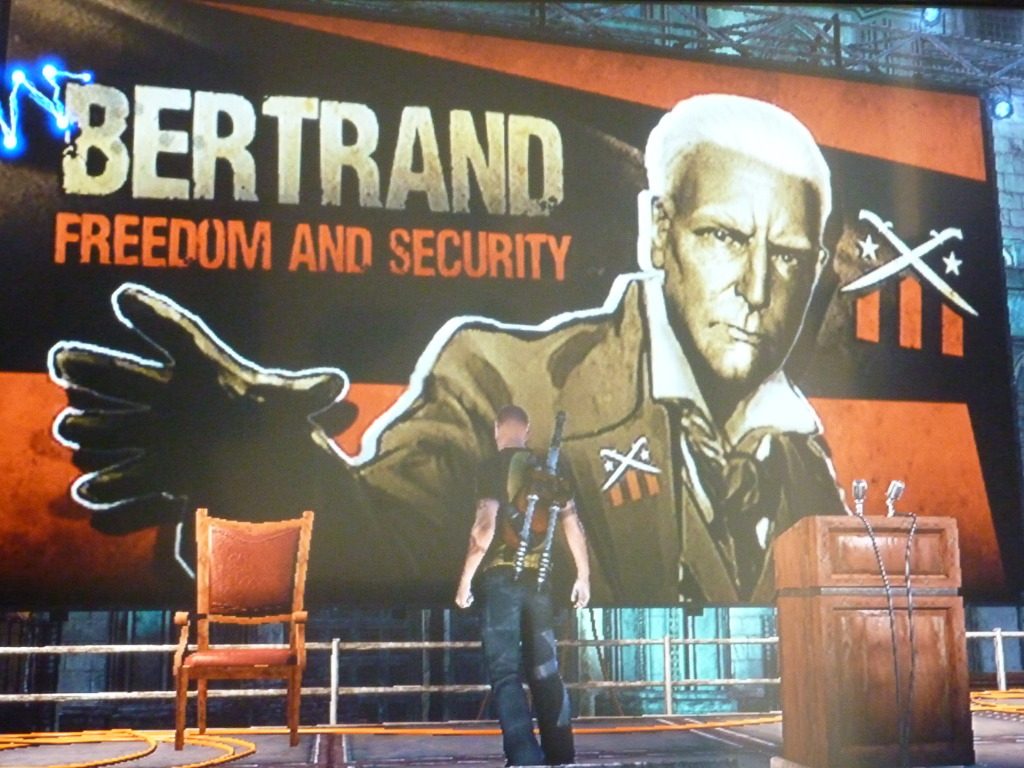 Also, look at the best friends.

On an unrelated, albeit sad, note: I’m taking a break from infamous 2. Hopefully I’ll resume in a month or two.