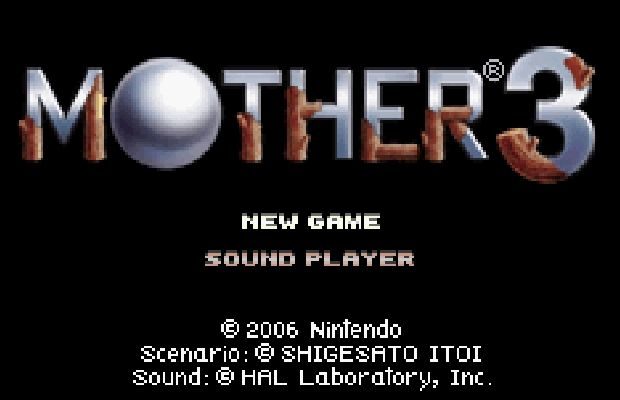 With The Last of Us completed, I was looking for a little somethin’ somethin’ to take away my post-game-completion sadness (isn’t that the worst feeling ever?) and it turns out I didn’t have to look very far considering there was a USB containing a download file for Mother 3 — “sequel” to the game known as Earthbound around these neck o’ the woods — WITH a English translator on it plopped on my desk.

Now, let me tell you I’m a VERY anti-piracy type of chick. In fact this extends to my refusal to purchase used games (not that I think purchasing used games is an act of unholy sin or anything like that, it’s just a personal choice) however I’ve always said when it comes to Earthbound — a video game title that is a staple of my childhood — I would pirate that bitch in a nanosecond if need be. (Like, if my cartridge stopped functioning, or I couldn’t find a used copy, etc.) Seeing as now Earthbound is available on the Wii U virtual console, that is no longer a thing that will ever have to happen. But Mother 3, on the other hand, was a Japan-only release and it has been pretty much confirmed that it will never see an official release outside of Japan.

So, what’s a diehard Earthbound fan to do?

She purchases a legit copy of Mother 3 from Japan, and then downloads the game with an English patch on her computer. HNNNNGH it was the only semi warm ‘n fuzzy thing I could think to do. But anyway, the point is I’m freakin’ finally playing Mother 3. I’ve literally been waiting to play ANYTHING Earthbound-esque since wrapping up Earthbound, which was in elementary school, and uh now that it’s happening I’m giddying all over the place.

LOOK AT MY CHARACTERS.

AHHH YOU GUYS! Playing Mother 3 is seriously a trip. I feel like I’m experiencing one of my favorite games for the first time all over again, and I can’t seem to wipe the goofy-ass smile off of my face. I’m only about an hour in, but I’m so freakin’ stoked I had to take a minute and expel my excite all over my blog.

Now I must take my leave. I have a forest fire to put out. Or something. I don’t quite know what I’m supposed to be doing yet.