Before you panic, I want to reassure you that there was not an outbreak of the T-Virus at PAX, and I am not actually a zombie. …Although that would have been awesome. HAVE I MENTIONED THAT I WENT TO A ZOMBIE WALK LAST JULY?! 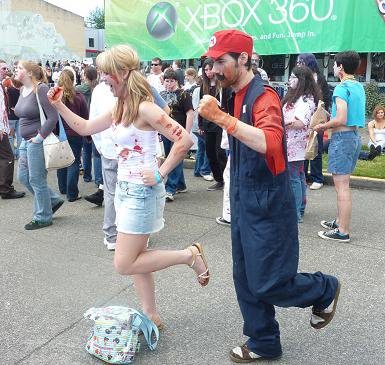 Okay, so if you can’t tell I’m not in the clearest state of mind. PAX is mentally AND physically exhausting. It’s a freakin’ marathon.

I’m currently sitting in the media room while a bunch of my buds are at a Deus Ex panel.  I should be in there with them, but I didn’t know about the panel until it was too late. Actually, I probably could have made it if I had just pulled a ninja and stealthly slipped into the front of the line, but that would have required getting off of my ass.

The flight to Boston was awesome in itself, seeing as 75% of the passengers were PAX-goers, including Major Nelson and the Penny Arcade guys. I, of course, was stuck sitting next to a dentist. Oh well. At least he didn’t stink.

So, let’s talk a little about PAX.

PAX is…PAX! It’s an asston of fun and the convention is considerably larger this year. Even though I just said I’m going to “talk” about PAX, I’m actually just going to make a few bulletpoints and post pictures. I’m a lazy bastard.

Uh…so honestly it takes about 5 minutes for each picture to upload, so I’m just going to post the rest later. Maybe I will after the IGN meet-n-greet. Or maybe not. I forsee lots of alcohol drinkage.

Wish you guys were here!