Oh man you guys, Illusion of Gaia has been great. I mean it when I say it’s exactly what the doctor ordered.

You’ll notice I haven’t updated the game log – but if I had to make a guess I’d say I’m probably about halfway through the game. (I’m basing that solely off of the three mystical statues I’ve accrued, and it t looks like there are six total.)

I’ve found Illusion Gaia can be difficult, especially when you’ve somehow managed to consume all of the limited herbs you’re given, which leaves you without any means of healing yourself in the middle of battle. Not that I, like, did that or anything. Nosiree. There’s no way I would have wasted two herbs by accidentally pressing the wrong button. Nope.

Okay, so if it isn’t pretty obvious by now…I totally, accidentally, consumed my last two herbs.

I am now left without any healing properties. DO YOU KNOW HOW TEDIOUS IT IS TO RUN BACK TO THE SAVE PORTAL EVERY TIME I NEED TO HEAL?! Ugggh. I had no clue the herbs were limited! Like, they’re finite. It’s not as if I can run to a shop keeper and buy 99 Herbs for 50 gil each. In fact, money isn’t a thing in Illusion of Gaia. It’s just you, your weapon, your limited inventory and a random save portal. Oh, and about twelve billion enemies.

My understanding of the story is quite limited, but here’s what Wikipedia has to say about it:

“When the game begins, Will stumbles into a “Dark Space” where he meets a strange being called Gaia. Gaia tells Will that he must leave his home and save the world from a coming evil. A comet is approaching, and it will bring ill fortune to the world. It is later revealed that the comet is in fact an ancient weapon used during the last Blazer War, and has the power to change the shape of the world. In the ruin of Ankor Wat, it is discovered that the comet’s repeated approach and effect on the Earth has prevented the world and mankind from evolving into a more modern state. Will and his friends travel the world and collect artifacts known as Mystic Statues.” 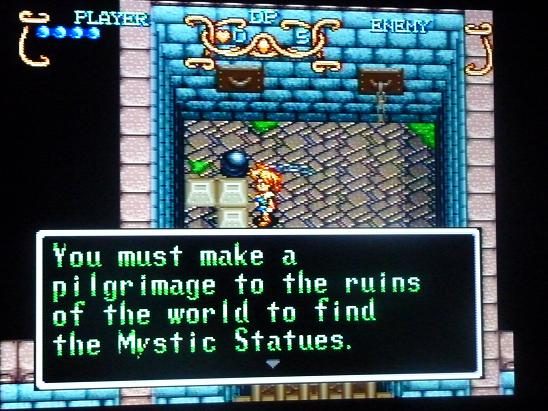 Ummm…I’m not entirely sure WHY I’m collecting these Mystic statues. Maybe it was explained to me at some point and I simply forgot, but whatever – sometimes it takes odd acts of valor in order to save the Earth, so I shall simply do what I’m told so that I may save it. ::puffs chest out:: Other than that, IoG is a very simple game. Like I said before, there aren’t badass weapons to find and equip (although Dark Knight Freedman is a pretty badass weapon himself) nor are their moniez to collect nor epic items to purchase. Admittedly I’m enjoying the differences – I can’t recall the last time I played a JRPG like this one.

Anyway, here’s a brief recap on the places I’ve been so far (WARNING — I was very sick while playing this, so my memory is quite fuzzy):

Larai Cliff: The dungeon portion of this area was easy, but for some reason I had a bitchin’ of a time with that boss and its stupid floating head/hand combo. But once I found the “safe” zone, aka the corner where his attacks couldn’t get me – it was a piece of cake.
Incan Gold ship: I somehow boarded the Incan Gold Ship as the King, and everyone wanted my nuts. The people had been waiting for me before they set sail in an attempt to flee…something. Something that was bad and trying to take over the poor bastards. We set sail and everything was peachy – I even found the second mystic statue. But then I fell asleep, woke up and discovered I was actually on the GHOST Incan Gold ship. Creepy.
Stranded with Kara: The ship was eventually attacked by a giant sea monster or some shit which caused everyone to fly overboard. I ended up being stranded with Kara for at least twelve days, and Will admitted to himself that he had feelings for her. Cute. We were eventually saved by a man and a dog.
Freejia: This was the next town we ended up in; it was a cute little town to explore, but then I found out there was slaving and all of that other mambo-jumbo in the Diamond Mine. I saved people and all of that good stuff, and ended up with reuniting with my friends in town. We then headed to meet Neil (Will’s lost inventor cousin).
Sky Garden: We ended up looking at the Nazca Painting, and from there I was teleported to the Sky Garden because I looked at a rock in the painting that represented the Condor’s left foot. I fought many a bastards in the Sky Garden. After defeating the bird boss, Viper, and jumping off of a cliff onto a moving airplane and crash landing in the ocean I ended up at…
Seaside Palace: My buddies were, like, half of a buddy. I think Lilly said it was like their soul was missing or something. Folks were being turned into terrible monsters, thanks to some machine running in the basement. I found a purification stone, used it and everyone was happy again. Squeee…

And let me tell you, Mu and I have NOT become good friends.

Trust me, you’ll find out why.