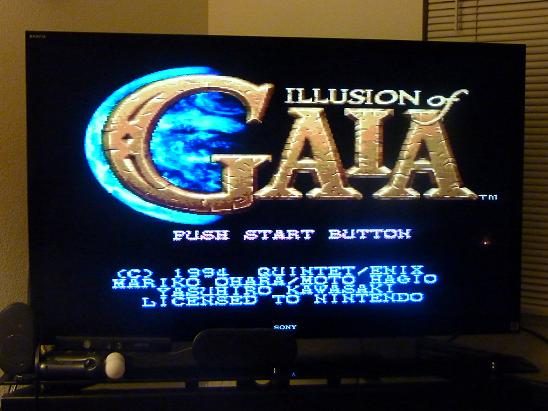 I have a HUGE backlog of SNES game I’ve wanted to play. Most of ‘em are cartridges I picked up at garage sales for a few bucks, but have stellar reputations – Secret of Evermore, Illusion of Gaia, Breath of Fire I & II, Final Fantasy: Mystic Quest, etc. But it seemed like I could never find the time to fire up one of these O.G. JRPGs.

Well, it seems like the stars have aligned. Seeing as how my 360 is currently out of commission (GRRRRR…) I thought I’d get my feet wet with some old JRPG goodness. (And honestly, ever since I started playing Pokémon Blue I’ve had the retro bug!)

I chose to play Illusion of Gaia because I saw a picture of a quaint little town while doing some research on it. Yep. That’s my reason. And it turned out to be a good one, because I friggen’ LOVE this game so far! It has all of the JRPG elements I’ve been craving, however the combat isn’t turn based, which I wasn’t expecting (it plays like a Link to the Past) but that’s just dandy with me. Variety is the spice of life, nahm’sayin?

At first the cartridge wouldn’t work, but with one good breath of warm, moist human air I got that bad boy running ;) 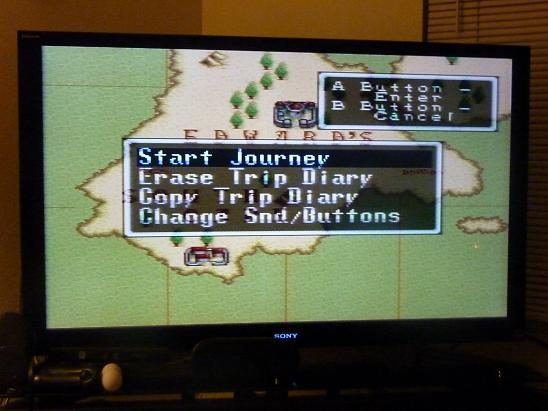 My journey started off at school at South Cape, and apparently me and my three buddies (Eric, Seth and Lance) are the only ones who attend. GOD I love these older games. HA! Anyway, demons have appeared outside of town and our teacher lectured that if any of us have to venture very far we need to bring our parents. I mean, it makes sense… parents can defend against raging, roaring demons after all. Riiiiight. After school was over Lance told me to meet him and the others at the usual spot – “the cave at the seashore”. 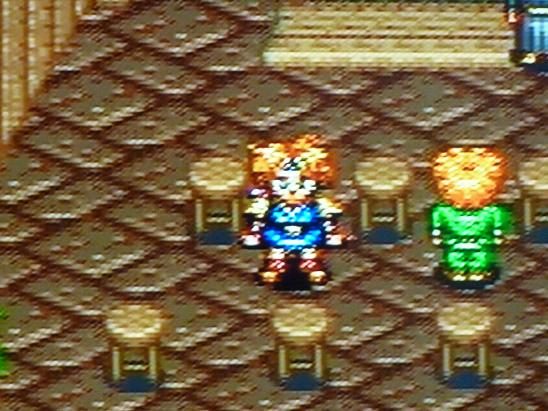 If I were younger I would totally have a crush on Will. I know myself, and I know that I have some weird fetish with amazing hair. Will appear to have amazing hair. 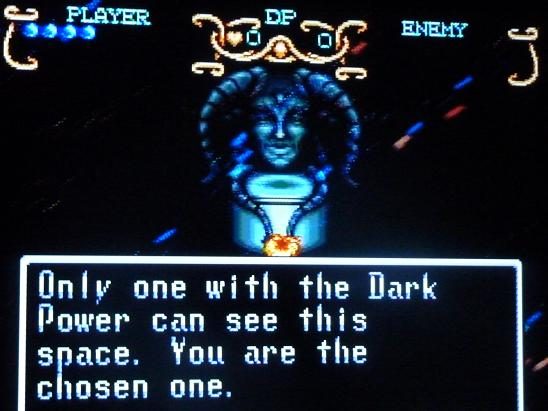 As soon as I left school I explored town (which happens to be the same town I saw in the photograph which prompted me to play IoG) and one of the things I came across was Gaia, “the source of all life”. Gaia told me that “only one with the Dark Power can see this space. You are the chosen one.” Well, shit. I always thought one of the staple moments in JRPGs is when your character is told that he is the “Chosen One”. Oh well. At least we got that out of the way relatively early on. And what’s this about the “dark power”? I thought heroes only had, like, “light” and “majestic” power. Hmmmm. 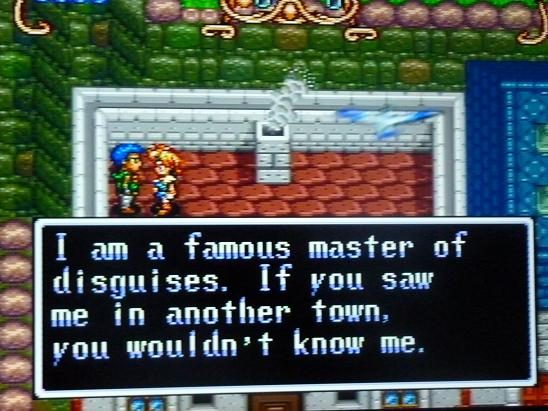 I then met this Jeweler Gem dude who can apparently control the Seven Seas. Riiiiight. Whenever I find Red Jewels I’m supposed to bring them to him. I think I’ve brought him three so far. Oh. He’s also a master of disguises. WhatisthisIdonteven. I wonder if the reasoning for him being a master of disguises will ever come into play, or at least make any sense. I’m willing to bet that each character model in every town for the jeweler is different, and Enix was like “OHAI that doesn’t make sense. If Will gives the jewels to one character how does this other character have them in the next town? I KNOW! We’ll make him a master of disguises!” 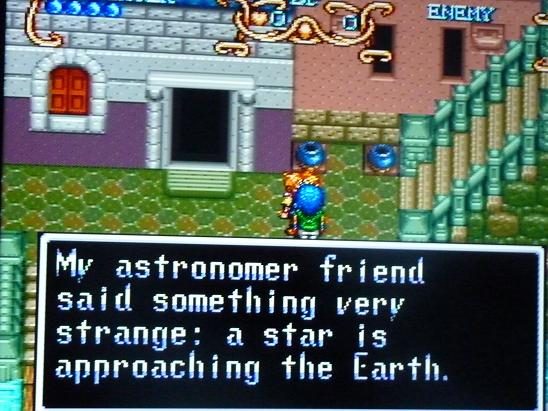 Apparently this is a thing that is happening. Also, Seth’s parents fight a lot and Erik is rich.

I then visited my own home. It looks like Will lives with his Grandma Lola and his Grandpa Bill. I was told to go play with my friends while dinner was being cooked or something. AKA “You have to do something else before we can initiate this cut scene” SO I went and found my brosephs at the Seaside Cave. Seth was pwning Lance at cards when Erik ran in with his panties in a bundle. He told us that the Edward Castle princess had ran away. 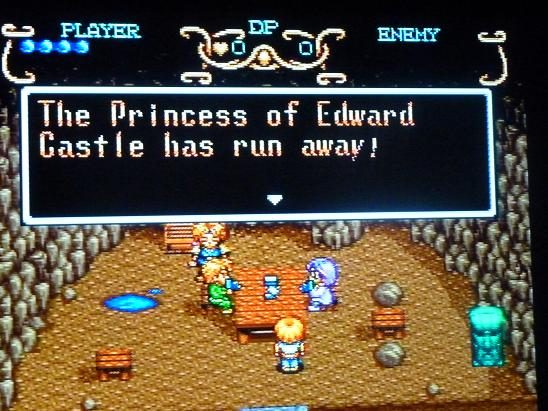 My buddies kinda brushed this off and instead had me show them a, erm, skill I have. If Will flails his flute around he can move certain statues, and apparently I am psychic? 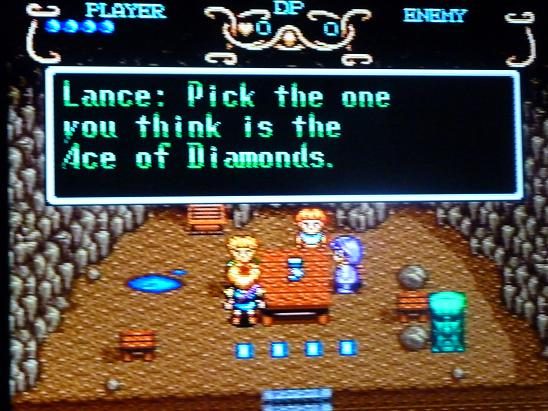 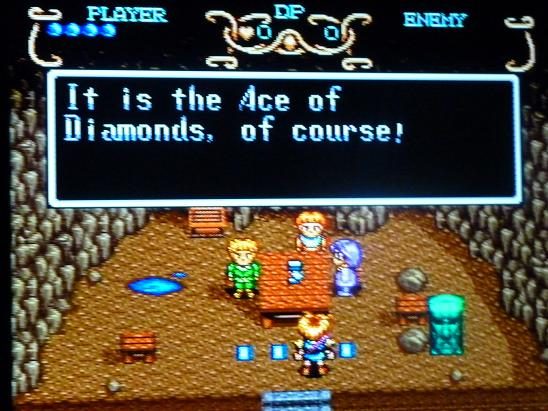 I mean, I’d like to think that I actually guessed the correct card, but I think the game is rigged so no matter which card you pick you’ll always find that damn Ace of Diamonds. Whatever bro. I then left the cave and headed back to Will’s house, where I, uh, found a pig. 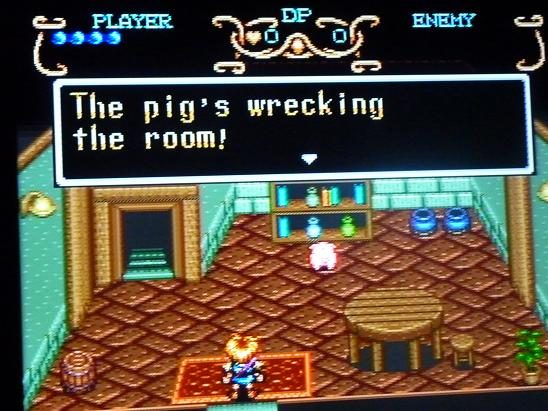 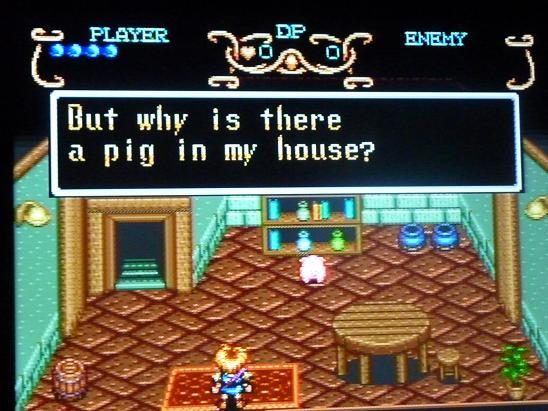 Oh, this game…I’m already in friggen’ love with it.