So when a friend of mine taunted me with the idea of going on a haunted tour of Seattle–cleverly named “Spooked in Seattle”— I was all ears. And goosebumps. You see, while I love nothing more than sitting down with a horror film, I am probably one of the biggest wusses out there.

Here’s an example of my noobness:  Have you heard of the film Paranormal Activity?  I paid money to LISTEN to it in the theatre. Not to watch it, but to LISTEN to it. I can’t watch anything like that and keep my sanity. If I were to lay eyeballs upon that film, I’d probably die of a heart attack. Want another example? I cannot play the F.E.A.R games. Nope, no way. I gave the game a go for about 15 minutes—right up until one of the stringy haired bitches got all up in my grill—then I promptly lost five years of my life and shelved the game.

SO, it only makes sense that I would eagerly partake in a haunted Seattle tour, right?

Ho-kay, so the tour was broken up into a few different components. Sometimes we’d venture into basements and were told “real life” stories of personal hauntings that occurred inthat specific location, and other times we’d be walking the streets of Seattle (I NO ARE PROSTITUTE) and we’d be shown photos of the same locale—but from the late 1800’s to early 1900’s—followed by another ghost story. At the end of the tour we were given a free drink. Great company, great entertainment and a great drink. Perfect, right?

But as the night went on, a few strange things started occurring.

Let me rewind a bit. Our last stop of the tour (right before we got our free drink) was at this cute little bar/restaurant that had a basement. We walked down into the dark abyssand were told that a little boy and girl were killed there in a fire. So, the paranormal activity is as follows: folks have supposedly seen this little girl in the basement, the women’s bathroom door have been seen/heard closing on its own, glasses have been thrown and men have reported hearing a woman whisper “Can you hear me?” in their ears while they are taking care of, erm, business in the bathroom stalls.

With that unsettling information, the tour ended and we headed back upstairs to the main restaurant and bar. My friend, who is not superstitious at all (and claims he never will be unless he has a personal experience), decided to head BACK downstairs into the basement to take a leak. I happily waited in the bar. No way in hell I was going back down there.

About five minutes later he emerges from the stairs, and tells me that someone had banged TWICE on the bathroom door, a few minutes apart. He gave me a sheepish grin. HE THOUGHT I HAD DONE IT! Yeah, right. Like I would take my pansy ass downstairs and risk being scared shitless. Not only that, but I didn’t see anyone follow him downstairs.

So, okay, that was a little weird.

The rest of the evening went smoothly. The next morning I awoke and did what any normal 23 year old female does—I turned on my phone (I had been charging it all night) and anxiously awaited for awesome emails and text messages to flood my cellular device. But waiting for me was something a little less than awesome. 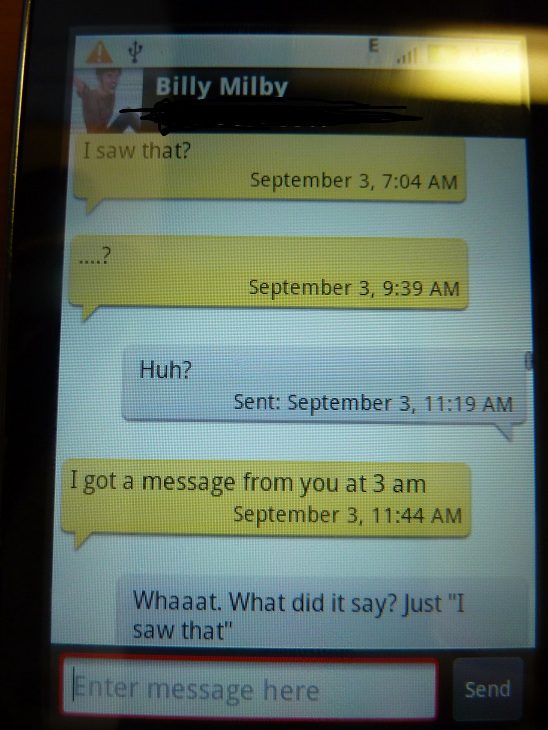 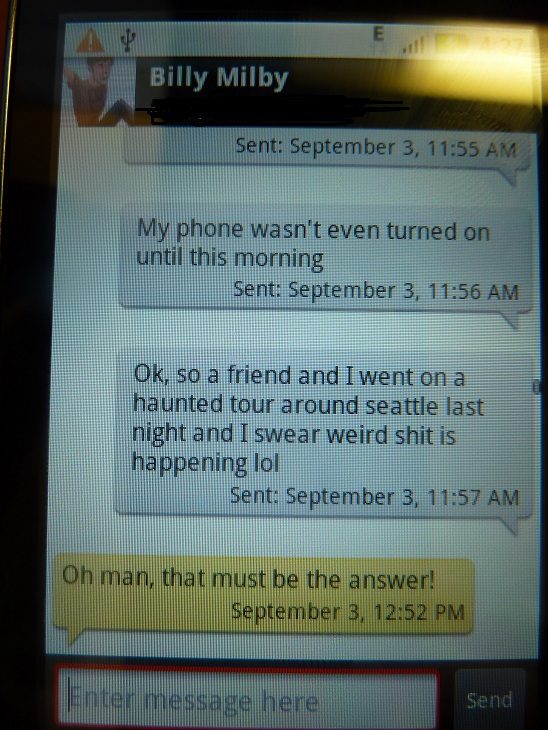 Yeah. Someone want to explain that? Not only was my phone turned OFF the entire night, there is no record of that text ever being sent. HOW DOES THAT WORK?!

A few minutes later I went into the bathroom to put my game-face on (game-face=makeup) and was just minding my business, doing mah thang, when out of the corner of my eye I thought my friend was coming into the bathroom (the door was shut). But as I focused on what caught my eye in the first place, I saw a towel hanging on the back of the door swinging.

The fan wasn’t on, there aren’t any air vents nor are there any windows in this bathroom. HOW DOES A TOWEL START SWINGING ON ITS OWN?!?!?!

Anyone? Anyone have a uhhhh answer for me?

But anyway, if you ever find yourself in the Seattle area for like, PAX next year or something, try to set aside time to take one of Spooked in Seattle’s tours. I definitley want to go again.