As you may recall I was in California a few weeks back hanging out with my buddy Kc and several other awesome people. I told you I went to Disneyland, I told you I went to a few garage sales, I told you I participated in an epic retro game night tournament…but what I didn’t tell you was that I recorded a small role in We’re Alive! And since my lines aired yesterday I figured it’d be safe to tell ya’ll about it!

For those of you that don’t know, Kc is the God behind We’re Alive. Writer, creator, producer, etc. And for those of you completely in the dark, We’re Alive is an episodic survival horror audio drama. Now, I host the community podcast for We’re Alive, which is called We’re Not Dead. (Clever, right?) Anyway, my old co-host Greg Miller was given a role several months back as a water salesman (yes, you read that right) and ever since then it’s been kind of an inside-joke, like, “Let’s get Britt a role too so she can best Greg!” — ALL in good fun, of course.

Kc texted me one night in March-ish and told me that he had an upcoming role he’d like me to fill and asked if I could fly down to CA so I could join the entire crew for a recording session. UM, HELLO. I couldn’t say “YES!” fast enough! I’ve interviewed several cast members of We’re Alive via We’re Not Dead and have met most of them personally thanks to the We’re Alive live event last July, but I never dreamed I’d get the chance to record with them!

But unfortunately, the recording session was on a Sunday and since I had to go to work the following Monday I was unable to stay for the actual recording session (plane tickets were like $200 more expensive to leave Sunday night as opposed to Sunday morning) BUT that didn’t stop me recording my lines! On Saturday we headed to the recording studio, which happens to be in the same building where Kc works.

After getting a short tour of the place (I had already been there last year, so it was all a memory-refresher ;D) Kc stuck me in this little booth, gave me a script and we got down to business! 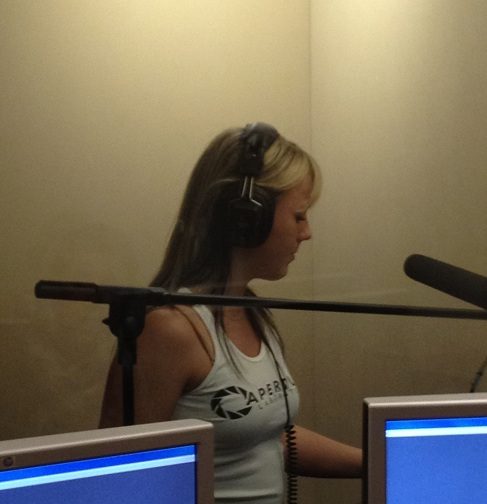 I’d totally be lying if I said I wasn’t nervous. I’ve never done ANY acting before, let alone voice acting, so A) I was wondering how Kc could trust such a n00b with lines B) I didn’t know how this whole recording thing worked, so I kept fidgeting and apparently that was screwing up my audio and C) Did I mention I was a little nervous?

I had been given my lines about a week before so I sorta-kinda knew what to expect and how to deliver them, but OOOH man — so, I played the role of a nurse who is trying to sedate a female who refuses to be screened for diseases. One of my lines is me struggling with this female, trying to get her rolled over on her side so I can, you know, stick her with a needle and such. Kc wanted me to sound like I was struggling, and I kept on failing, so we tried a few things. First, he had me grabbing my own arm and struggling with myself in order to convey the sound of struggle-ation (I just made that word up) but when that wasn’t working he actually came into the booth himself and offered up his arm. And by offered up his arm, I mean he had me grab onto it while he pulled and jerked around DURING which I recorded my  line, “Roll her on her side!”. It worked! That Kc, such a brilliant man…sorry about the minor bruises!

There’s another line which takes place AFTER we sedated the female. I’m supposed to be out of breath so Kc had me jog in place for 30 seconds before I recorded the line. And again, it worked! These actors/directors and their secrets, I tell ya… ;D

Before I knew it, it was all over! Holy crap you guys, It was SO much fun! I definitely feel privileged! And at least I’m a badass nurse as opposed to a WATER salesman. MUAHAHAHAHAHA…..