The above video magically surfaced on PlayStation’s YouTube channel. So, let’s play a game — oh, what could this game be a trailer for? Gosh I just haven’t the slightest idea.

Okay, I’m not even a God of War fan (more on that in a bit) and even I’m 96.4% sure this trailer is for God of War: Ascension, which is due to launch in March. ::shoots confetti:: This trailer, though, got my brain spinnin’ a bit.

I’ll start by asking this: has there ever been a video game — or franchise — you wish you could get into, but just can’t? It’s like, you WANT to love this franchise because you understand the impact it has on the gaming industry, therefore you wish you could give more of a shit.  Well, for me, that series is God of War. And it’s not like I haven’t exactly given God of War a chance — I bought the HD collection way back in the day, and hell, I even own the Ultimate Edition of God of War III. 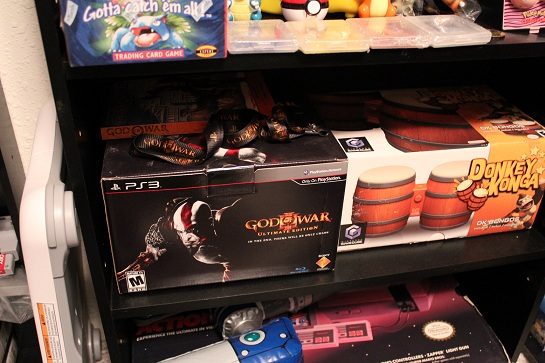 As you can probably tell, it has yet to be opened. Let’s see…I also see a book and a lanyard that haven’t received any love. See, what happened a few years back was I bought the God of War collection with full expectations I would fall in love with the series, so you could say I sorta-kinda went on a God of War spree. “Let’s reserve the Ultimate Edition!” “Oooh, a lanyard!” “OMG A BOOK I MUST OWN THIS.”

But going back to what I said earlier, it’s not that I haven’t given it a fair chance. I think I spent about three or four hours trying to get into the first God of War (HD) and all I can take away from it was that it had a fun sex minigame.As I scavenge my brain I recall some pretty badass boss battles, too. But, dammit, for whatever reason I couldn’t get into it. This could be because of two reasons:

…Well, dammit. Now I want to play God of War. I definitely didn’t expect that was how this blog post would conclude. See? Blogging is like therapy. I dish out all of my problems and work my way out of them by writing for you. We have a great relationship, reader. <3.

BUT YOU CAN’T JUDGE ME FOR PLAYING ON EASY MODE, OKAY?!!!