In an attempt to prove to myself that I am a female and have a vagina, I saw this movie called Magic Mike last Friday. Have you heard of it? Basically it’s a plotless film sorta-kinda about male strippers and it focuses on one specific, VERY successful stripper named Mike. Now, the HUGE TWIST to all of this, um, story (or lack thereof) is that Mike wants to, uh, run a furniture business. Mike also converts a construction worker into a successful stripper. Also, he ends up developing a fling with said construction worker’s sister.

Do they end up getting together? Does he ever start his furniture business? I dunno. THE FILM NEVER TOLD US.

Of course, 90.2% of the audience didn’t care whether the film had a plot or not. To give an idea of how much estrogen was flowing in the theatre that night, let me show you a picture of the line: 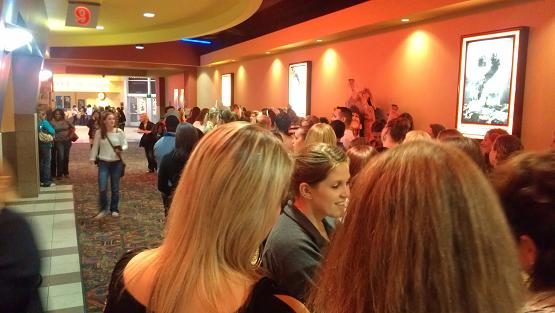 Speaking of lines — here’s the bottom one: If you want to see Olivia Munn’s boobies on the big screen go ahead, pay the $9 and you’ll be able to leave within the first ten minutes. Other than that…yeah. I mean, I’m not trying to hate, and don’t get me wrong – seeing those guys move their hips and making babies with the air looked nice, but there’s something so unattractive about a dude in a thong. Like, women are beautiful creatures. We look good in little pieces of dainty underthings (well, some of us do) but seeing a dude remove his clothing to nothing more than a little frilly g-string is, like, super feminine and kinda gross. Maybe had there been an actual plot it would have been more entertaining. It was seriously like this: “Okay, I’m going to close my eyes until I start hearing club music and then THAT’S my cue to open them because the club music more likely than not signifies that half-naked men will shortly be prancing around.”

The best part of the night was when my friend Erin and I played the Terminator game in the arcade beforehand. We mastered the art of crotchshots.