This Saturday I’m attending zomBcon, and let me tell you, few things in life are as amazing as a convention dedicated to zombies.

ZomBcon is very new—last year was the first year of its undead existence—but the support it receives from the community as well as celebrities is impressive.

Sam Trammell (Sam Merlotte from True Blood) will be there, and there is a 82% chance I get will attempt to jump his bones and make a baby with him. Norman Reedus (Daryl) and Jon Bernthal  (Shane) from The Walking Dead will also be in attendance. There is a 3% I will try to jump Norman Reedus, and about a 67% I will try do the same to Jon Bernthal.

And with Halloween around the corner, my current obsession with zombies is a little more fanatical than usual. Therefore I am SO pumped for the vendors this year, as last year ZomBcon had BUTTLOADS of them selling comic books, books, playing cards, board games, magazines, photos, art, t-shirts, zombie branded food, ammo, survival gear…ooooh man. I’m getting a little tingle in my pants just thinking about it. Unfortunately, the probability that I’ll be overwhelmed by all of the awesome and spend every penny I brought within an hour (like I did last year) is pretty high. But I ain’t scurred! Between the panels and other activities happening around the convention, there is still SO much to see and do!

If you’re feeling good and nerdy, you could try to find a zombie themed Dungeons and Dragon’s game like Tara and I did last year! 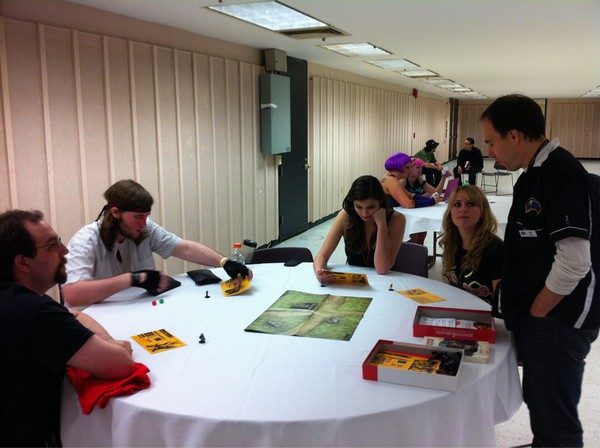 You could stop by the Night Zero booth and get a kickass photo taken. OR, you could gawk and stare at Sam Trammell from an awkward distance until a sufficient puddle of drool accumulates on the ground.

And don’t forget about the undead people watching. 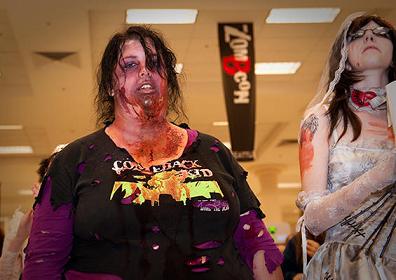 Speaking of that, in order to get ready for this undead fuck-fest (um, there won’t be any of that. It just sounded good, I promise) my friend Erin and I are going to get all dead’ed up. I still have a ripped shirt I wore to the Red, White and Dead Zombie Walk last year, and I’m thinkin’ I could find some cheap jeans to mangle, destroy and douse with fake (as opposed to real) blood.

I’ll make sure I take a bunch of pictures and give you all a recap!