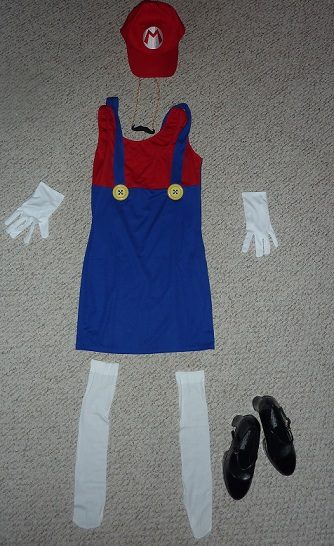 Is this…considered cosplay? I mean, I’ve never cosplayed before. DOES THIS MEAN I’M BURSTING MY COSPLAY CHERRY? Or does it not count since this is gonna be for Halloween? But since I didn’t actually make the costume, it would be shameful to even consider calling it cosplay, right?

Anyway, I am SO excited to wear this tomorrow!  The costume is officially called “Perky Plumber”  (I know, I know) and came with the dress, necklace and a plain red hat that kiiiinda  looked like it was carrying a pile of shit in it. Like, it was all lumpy. So I ordered an “official” Mario hat, bought some gloves and socks and called it gravy sauce. I was also going to purchase a 1-Up mushroom, but there’s a 92% chance I would have lost it in some drunken state of awesomeness.  The only ish I don’t have are brown shoes, but I figure black is good enough! Oh. I also don’t have a mustache. I tried growing one out, but….

The plan is to barhop around downtown Seattle and possibly hit up Gameworks. For serious, if you’re gonna be dressed as Mario (or, excuse me, as a “perky plumber”) it’s written in Life’s code that you need to go to Gameworks. I’m not kidding.

I hope all of you have a great Halloween weekend! Let me know if you’re dressing up as anything! <3.