(Play this song while reading this post. It makes it that much better. Then continue listening to it afterwards because it’s that awesome)

My friends, in two days I will fight in an epic battle. This will not be a short battle–oh no—this will be an on-going battle that will require hours of tactics, buffers and possible back up.

I will go against two of my arch enemies (no pun intended) in a struggle that will extend into the new year.

Ladies and gentlemen, meet my opponent: 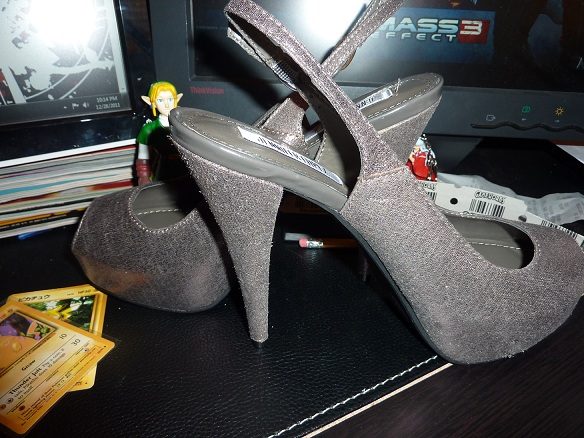 Whoever invented the idea of wearing hooker heels on New Year’s Eve deserves to be punched in the lungs.

You guys, I’m not Bayonetta. I don’t gallant around in heels, let alone ones that make me push the boundaries of 6’. But damn! The only fem-shoes being sold during the winter season are these friggen’ platformers!

(Ha. For once, the word “Platformers” is on my blog and not related to the videogame genre. Siiiigh. :/)

As you can tell, I have these weapons of mass destruction perched on my desk in hopes that I’ll, like, be able to mentally beat them down and own them on New Year’s Eve with the assistance of gel-inserts (my buffers), flats (back up) and the occasional placing of my arse on a chair (tactics).

I hope all of you have a fantastic and safe New Year, and let me know what you plan to do!