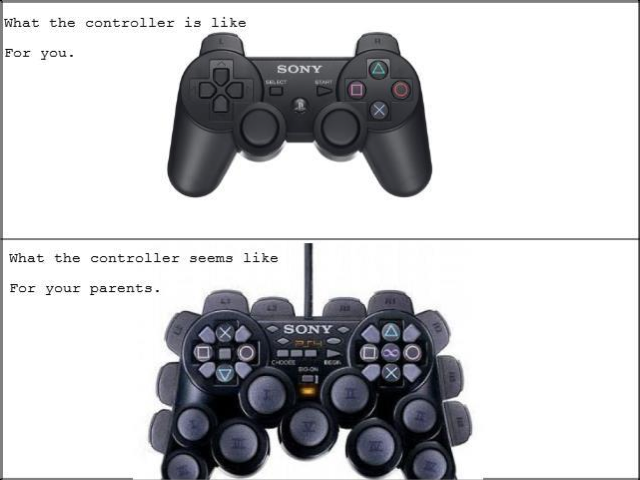 Oh man, ain’t that the truth?!

Some of my fondest childhood memories are those of my parents playing videogames with me; it really flooded my inner being with those warm and fuzzy feelings. I mean, I was only eight, nine years old and my parents were taking the time to express an interest in the activity that interested me the most–how is that NOT cool to a young spawn?!

My mom played Tetris, Frogger and Sega Marine Fishing with my dad and I, but that was about it. My dad, on the other hand, tried more enticing games like Twisted Metal, the old Medal of Honor and Spec Ops games, not to mention platformers like Super Mario and Donkey Kong (in fact, we beat all SNES Donkey Kong/Super Mario World titles together!). But then we also played random games such as Bomberman, Cabela’s Big Game Hunter, Pink Panther and Virtual Bart.

But I’ll never forget how he STRUGGLED with the controls! After a few hours he would nail them, but by the time we went to play again—no more than a day later– he had forgotten EVERYTHING. It was adorable; he’d have to peer down over his glasses so he could try to memorize where the buttons were located during the middle of firefights. <3.

Awwww. Good times. I’m going to have to see if I can bring over my SNES so pops and I can have a retro gaming marathon!