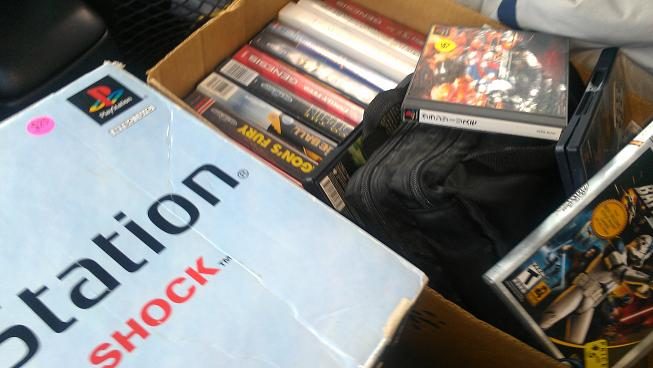 Last week I posted Videogame Haul #11, and I had to end up cutting the video in half because it ran sorta-kinda long. Like, ten minutes long, and that’s a long time to listen to a chick talk about her garage sale finds. Hell I can’t even stand to listen to MYSELF talk for ten minutes! (^_~) In the video, I said I’d post the remaining three or so minutes on Friday, but little did I know I was on the verge of like, catching the friggen’ plague.

Although I looked normal –er, let’s scratch that and say healthy (I can’t ever mention the word “normal” and “I” in the same sentence) in the video, I woke up the next morning with a sore throat, a fever and a cough. So, if you look closely, you can see the bacteria slowly pwning me in the video, plotting to turn my body against itself in an attempt to make it feel better. (Bodies…so weird.)

Anyway, after missing a few days of work due to this disease I somehow gathered the energy to hit up several garage sales on Saturday. AND I FRIGGEN SOCRED SO FRIGGEN HARD! The pic above is a sneak peak of my wares. Example: that box above has a Sega Genesis, a Game Gear, about seven game gear games, at least eight or nine boxed Genesis games and about six boxless games. ALL FOR 30 BUCKS.  Le Squeeeee…

Unfortunately spending all day walking around other people’s yards drained every last drop of energy I had, and even though I made an attempt to make a short video intro’ing the remaining few minutes of last week’s video, I couldn’t bring myself to post it. You guys, my eyes looked like there were two Jigglypuff’s under them. Not only that, but I couldn’t stop Koffing up Muk, I was rather Gloom-y and was talking rather Slow, Bro.