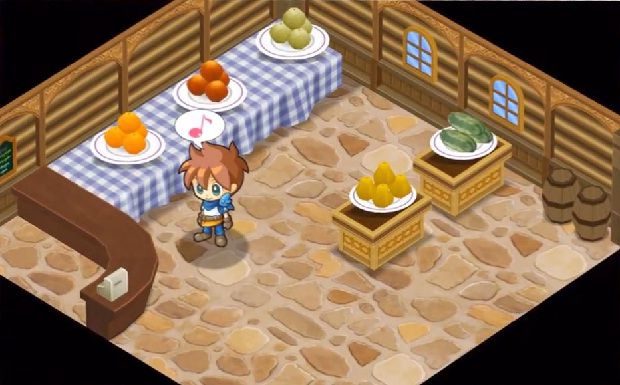 Being an avid Harvest Moon fan my entire life, I was stoked when Yasuhiro Wada — creator of the Harvest Moon series — teased his latest project at E3 2012, titled Project Happiness. At the time, he revealed the game would take place in a small village and the player will assume the role of a merchant whose goal in life (my words, not his) are to collect and sell items to the correct villagers, thus making their dreams come true. Ah, dat cheese — gotta love it.

In the same scope of how improving your farm in the Harvest Moon series seems to improve the life and well-being of everyone, my assumption is that as your shop progresses and you make your customers happy the village will grow and expand to become a booming metropolis. (Okay, that’s a slight exaggeration.) And typical to Harvest Moon, there will be many moral choices throughout the game that will shape the story, which will lead to one of “the most powerful and emotional endings ever experienced in videogame.”

In any case, it has been revealed that the official title of this game is HomeTown Story and you can watch the trailer below.

Awwww. That makes me feel all sorts of warm and fuzzy!

I don’t believe any specific platforms have been announced, but HomeTown Story is a handheld title and will be released by Natsume later this year. Assuming it comes to the 3DS (which it will) and assuming I’ll be purchasing a 3DS XL for the release of Pokemon X and Y (which I will) this will most likely end up in my arsenal of 3DS vidjas, only to be played during flights and doctor visits. Or when I’m driving. But don’t the Seattle PD that.