I was allotted only about 10-15 minutes with the 3DS title, but during that time the Harvest Moon-isms were oozing out like…uh…like oozy goodness, meaning what little direction I was given allowed me to take hold of the reins like I knew WTF I was doing. Within the first five minutes I had customized my little store and had even sold shit! (And by “shit” I mean I sold an egg for 40 dollars. What.)

Like every Harvest Moon before it, someone has died (yikes) leaving you, the main character, with the responsibility of restoring the prior glory to whatever the hell had the aforementioned glory. For once, it’s not a farm — it’s a store. And your grandma is the one who bit the dust.

The first order of business is to set up shelves for your products, and you’re offered numerous styles of furniture to choose from. If you’ve ever played a Sims-esque game before you know the drill: you have different “tiers” of items at your disposal — in this instance, it was the nasty-ass shelf, the typical shelf and the OMG FANCY PANTS shelf. Since I was poor I had to settle for the nasty-ass shelf for my products, and apparently it was evident — a few customers  complained that the desk was dusty. 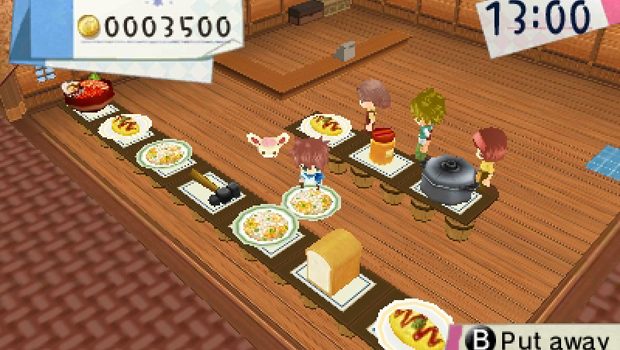 After choosing and placing your shelves, you get to pick and choose which products you’ll offer. In the beginning it’s probably a good idea to stay safe and sell generic products like eggs and whatnot, but as you get to know the 30-40 unique characters (there are also 100+ other characters, but these guys are only good for purchasing things, not for building relationships) you’ll learn what items they want to see available for purchase and other wants/needs/desires/deepest darkest secrets. If you tailor your shop to their needs you’ll be ROLLING IN ALL OF THE MONEY, so it’s urged that you build those relationships.

After selling a few eggs I peaced out of my store (which closes it) to take a quick peek at the surrounding areas. During my lil’ expedition I ran into several characters, engaged in numerous conversations and even found my future husband. (He just doesn’t know it yet.) About that time I had to wrap things up, but I was left wanting more. If you’ve ever played a Harvest Moon title before this game will come to you SO incredibly easy — and if not, well, I have faith in you. Natsume games typically cater to everyone. :)