I was one of those kids. One of those kids that was SOOO pissed that Nintendo was developing a cell-shaded Zelda game. All I had wanted since Majora’s Mask was a Zelda game geared towards the big kids and my young, ignorant 14-year-old self scoffed at the thought of a toon Link.

Do you remember when EGM published that infamous “Changing Course” article in their April 2005 issue?

Yes, I was also one of those kids that immediately called GameStop upon reading this pseudo godsend, only to be told by a cackling clerk that it was an April Fool’s joke.

Wind Waker had released about two years prior but I was still weary of the game. I had played it (and if I remember correctly, had progressed a fair amount) but I just could not get over the cartoonish look of the game and the drastic change Wind Waker had taken. To me, it simply wasn’t Zelda.

But nowadays I like to consider myself older and…erm, wiser and I honestly could give two shits about how a game looks. And with the 3DS launching in North America shortly (and Ocarina of Time 3D EEEE) Zelda has been on mah mind like…well, it’s just been on my mind a lot.

I’ll start by saying this—it blows my mind that I couldn’t associate Wind Waker as a Zelda game eight years ago. How dumb was I?! Sheesh. I’m totally digging the gorgeous cell-shaded graphics… and excuse me, but the character animations?! SO good. I guess a plus to developing a game that looks like a cartoon in action is the range of animations one can give their characters. Who woulda thunk it?!

But seriously, even though I’ve barely scratched the surface of Wind Waker, I’m glad I’ve waited so long to get serious with it. Instead of rushing through the game while criticizing it for what it could have been (like I did several years ago), I now appreciate it for what it is. I want to search every nook and cranny. I want to gaze out into ocean. I WANT TO CARRY MOAR PIGGIES AROUND WINDFALL ISLAND!! >_<

Plot progress: I’ve made my way through Outset Island, tackled the Forsaken Fortress, saw a glimpse of the green-skinned bastard himself and just finished up business in Windfall Island. As soon as I started sailing around the ocean, I had to turn Wind Waker off. [sad panda]

The more I progress into Wind Waker the more I hate myself for waiting so damn long to give it a fair shot. Sigh. I hurt inside when I remember the thin layer of dust I had to wipe off of the box 12 days ago…

In the past week and a half, I’ve been spending what little free time I have saillin’ the seas of…crap. No, I haven’t been sailing seas of crap. I mean I can’t remember the name of the world is in Wind Waker. HMMM. Does it even have a name? I know Hyrule is just chillin’ below the Great Sea, but…whatever. I’m a tard. Anyway, I think I’ve progressed a good amount in the game. I’m about to tackle the Wind and Earth Temple, and after that I think is when I’m supposed to find the Triforce shards.

Come to think of it, the reason I quit playing Wind Waker years ago was because I loathed trying to find those bastards.

THIS TIME, I SHALL PREVAIL!

…even if it requires some alcohol to muster through it. GOD. This is totally random, but I just got a flashback of my drunk ass driving the Warthog in ODST. That was a disaster. I wonder how I’d fair operating King of Read Lions while under the influence? Bahaha.

Yesterday I was sick, low on patience and (here’s the worst part) not in the mood for Wind Waker. I was more or less in the mood for a couch, blanket and terrible television (GOD I love Maury) and that’s pretty much what my day consisted of. But when you have an entire day at home, sick or not, there’s no way you can allow yourself to neglect gaming. It’s like, against the rules of gamerism.

I needed to find Makar and Medli. I couldn’t find Makar (I *think* he’s behind the right waterfall in Forest Haven and you have to use your grappling hook to swing into a hidden cave. I tried it once or twice, couldn’t get in, and gave up XD). So instead I warped to Dragon Roost Cavern, got Medli in my boat (CHYEAAA) and went ventured into the Earth Temple.

OH! Real quick: why the hell was a Zora the sage for the Earth temple? I was expecting a Goron. Just sayin’.

Okay, so I’m in the Earth temple, carrying Medli and I’m getting nightmare-ish flashbacks of Link carrying princess Ruto in the belly of Jabu-Jabu. Except there is one major difference: YOU HAVE TO CONTROL MEDLI. Like, be her. Move her around. Make her press switches and shit, which is fine, I appreciate the slight changeup in gameplay. BUT. This is what makes this extremely frustrating: You have to conduct the Command Melody every time you want to take control of Medli. There isn’t a simple button designated to switch you from Link to Medli— only when you’re playing as Medli and want to switch back to Link can you simply press R.

And me, being in the state of grumpiness and delirium that I was, kept unintentionally switching back to Link when I wasn’t done controlling Medli, which would require me to pull out the Wind Waker and conduct the Command Melody over and over again. This was the thought process churning in my brain:

“Okay, I’m playing as Medli. I need to reflect sunlight into that pit of poisonous gas. Because I have always known that R brings up Link’s shield, I will press R to bring up Medli’s Harp!”

<reverts back to Link>

To the game’s credit, I was sick and short-tempered so it could have been my delirious ass making a bigger deal out of it than it is, and it is my fault that I’m unable to comprehend the idea of NOT pressing R. Anyway, my patience was so thin that I turned the game off after getting to the third room.

The rest of the Earth Temple wasn’t SO bad. Apparently my grumpiness was getting the best of me after all.

Last night I was able to find Makar behind the waterfall in Forest Haven (thank you astrofizzix for the tip…who woulda thought you had to complete the Earth Temple first?!) and I brought that freakin’ ADORABLE Korok with me to the Wind Temple.

(Uh…how come I never realized Makar was SO freakin’ cyyuuute!?! Seriously, I want a Makar plushie. Do they make those?)

I could tell there was an attempt to up the difficulty in the Wind Temple. Some of the battles even consisted of taking on three or more heavily armored bad guys at a time AND one of those bird-dudes that throw flames at you *GASP!*. Buuut…it wasn’t too difficult. I’d say I found it more frustrating than anything else. See, I like controlling link and having him do the fancy back flips, side strafes and forwards slashes, but in battle scenarios like that, it’s just easier to wait for the “A” button command prompt. Go ahead, call me lazy.

And when it got time to face the boss, it was easy as pie. What a bummer.

Actually, Wind Waker as a whole is extremely easy. The dungeons aren’t difficult to figure out (if I find myself stuck I’m usually over-thinking a puzzle) and the enemies don’t pose a challenge. It’s kind of funny because I died twice while inside Dragon Roost Cavern, but I must have been going through a learning curve or something funky because I haven’t had any problems since. When I last left Wind Waker I had completed both temples and was ready to dive into the infamous Triforce-shard-collecting quest. Using my IN-credible chart I was able to find my first treasure chest with ease. But when it opened and a Triforce Chart came out instead of an actual shard, I facepalm’d. I had forgotten that you have to sail all over the freakin’ ocean just to find the Triforce CHARTS, then pay out of your ass (damn you, Tingle) to have all 8 of them translated. Then (and only then) could you locate the actual shards. Meh.

Honestly, I found the whole ordeal annoying, but it wasn’t as bad as people had made it out to be. Maybe it helped that I took a four hour break in between finding the charts and the shards. Heheh. J

Rewinding a bit—there’s a Triforce Chart you find by fighting your way through a 30 level dungeon; once all enemies on a level are defeated, you drop down the next level, defeat those guys, so on and so forth. Anyway, once you reach the 30th level the Triforce Chart is yours for the taking. But if you can survive an additional 20 levels a piece of heart is yours for the taking.

While I didn’t need a piece of heart, I decided to go for it. I was itching for a challenge anyway.

The thing with Wind Waker is it’s not a challenging game. The puzzles are easy to figure out and the enemies are simple…by themselves. But if you toss six of the toughest enemies the game has to offer in a small, crowded room, things change. And I uh found that out real quick.

By the time I reached the last level, I had a quarter of heart left. And of course I was greeted by four of those big knight dudes. Oh. I just googled them. They are called Dark Nuts? PFFT.

Anyway, so there I was…on the VERY last level, without faries and I had these big ‘ol Dark Nuts (TEEHEE) marching towards me. And I had a quarter of a heart. A QUARTER OF A HEART. It was seriously probably the most intense battle I’ve ever fought in a Zelda game! Was I the only one disappointed by Ganon’s Tower?

Upon entering Ganon’s Tower I immediately noticed the room consisted of a central platform with five bridges stemming it, each leading to separate rooms. So I’m thinking, yeah buddy, five different doors already? This “dungeon” is going to be a BEAST.

Turns out each room leads to a “mini-level” themed after the prior dungeons. Okay, so it’s not totally new content, but whatever. But at the end of each of the levels, you had to go face-to-face with the corresponding dungeon boss…again.

Sure, it was cool in the sense that I realized how much better at Wind Waker I had become but…really? This isn’t Dragon Roost Cavern, it’s Ganon’s Castle. The labyrinth of the pig-nosed bastard himself. And it’s not like the difficulty was upped in each of the levels—in fact, they were extremely easy and I blazed through them.

I BEAT THE GAME. Actually, I beat it on February 13th, but hey.

It may have taken me over seven years, but I did it!

Wind Waker surprised me in every way. Like I’ve said numerous times before, I jumped into it with a skeptical attitude (that had been brewing since I was a teenager, mind you) but my doubts were quickly alleviated. Sure, the Triforce fetch quest was a pain in the ass (though it wasn’t as bad as I had assumed it would be) and yes, sailing the ocean was oftentimes tedious as hell, but the important thing was the gameplay was enjoyable, the dungeons were well-built (which is a HUGE deal to me. I’m a dungeon whore) and Link morphed into a badass.

Maybe now I’ll give Spirit Tracks a go. I bought that eons ago as well. 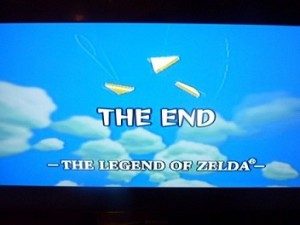