Puzzle Clubhouse and industry analyst CEO Jesse Schell gave a fascinating speech during DICE last week, and if you have twenty minutes of free time I suggest giving it a listen.

While he makes many valid, interesting points one of the more intriguing was when Schell displayed a graph that depicts game sales across the Xbox 360. (If you don’t want to watch the video in its entirety, jump to the 10:20 mark.) 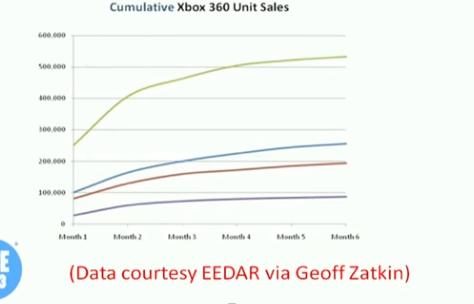 But once I thought about it for a solid 26 seconds or so my shock turned into “Yeah, that makes sense.” As Schell goes on to explain, a trailer (hopefully) piques curiosity of a game. Curiosity makes you want to try that game. If a demo is available, it would make more sense for you to try the demo without purchasing a full-fledged $60 game, right? So, if you try the demo and enjoy it, great — there’s a win for the game industry. Life goes on. Sales boom. Sweet.

Let’s say, though, the demo fills that curiosity meter piqued by the trailer, and once you’ve tried it, you’re no longer interested in the game. And ultimately, a purchase isn’t made. Congratulations, you have just crashed the video game industry. (I kid, I kid.) Whereas if there ISN’T a demo offered you’re “forced” to purchase the game. Granted, for true accurate data I imagine you’d have to take in rental services like GameFly and your gamer friends you like to mooch off of, but nonetheless, fascinating stuff.