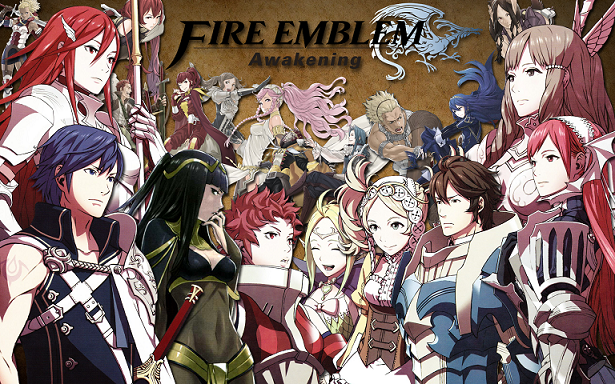 As I was riding my “HOLY FUCKING SHIT I LOVE THIS HANDHELD STUFF!” wave post-completion of A Link Between Worlds, I decided I was going to (further) ignore my next-gen consoles and download another game on my new 3DS. Hell, I finally had this vast array of previously untouchable RPG titles at my disposal and I was more than ready to dive in and get my fixins’. Fire Emblem: Awakening was looking mighty fine, and I’ve heard nothing but stellar awesomeness, thus downloading it was a no brainer.

Within minutes I was hooked.  I loved creating my character, a studly blonde-haired dude named Max (that’s my go-to male character name for whatever reason)(actually I think it stems from my old, old crush on Max in A Goofy Movie)(more like Max as Powerline)(is it grammatically correct to use this many parentheses?), I loved the art, the cut scenes, the battle system, everything. “If I’m having THIS much fun during my first hour,” I thought, “I can’t wait to explore the world, visit shops, and get lost in exploration!”

Well, two hours passed. Three hours. Four. I’m now about 20 hours into the game and DAMMIT I YET have the opportunity to explore freely. When can I venture around in those magnificent capitals, and in those beautiful towns?! When can I scour the fields for treasure?!

Okay, obviously I now know I’m likely not going to get the chance to experience this thing called “free movement” and “exploration” in Fire Emblem: Awakening. This is my first Fire Emblem game, and in all fairness I didn’t know what to expect. I had no clue all of my free travel would be, uh, during battles and via predetermined “A to B” lines. I’ve never played a game like this before — where the player only has control of the characters in battle — and I’m having an okay time coming to grips with it. I definitely miss the sense of marvel I typically get from exploring in a RPG, but it’s not too big of a deal.

The only other thing I’m kind of battling internally over are the character relationships. I love me a good set of characters, and the characters in FE:A seem interesting enough. I’m DETERMINED to make ALL OF THE RELATIONSHIPS HAPPEN because that’s what I typically do, but I’m starting to bore of it. The payoff for spending hours and hours just building the character levels doesn’t seem worth it from a story perspective.

“Well then stop, numbnuts, and enjoy the main story!”

I WANT TO BUT I CAN’T. I..I just can’t! But because I can’t ignore the relationship building, and because there are only a kajillion different combinations, I’m spending all of my time doing focusing on that and not focusing on the story which means my interest in the game is faltering and that’s no good for anyone.

HELP. So, uh, is building every possible character relationship a thing that most FE players do? Or is it generally considered too massive of a task, and is generally only completed by the badass-est of the badassed?I need Fire Emblem life coaching, people.