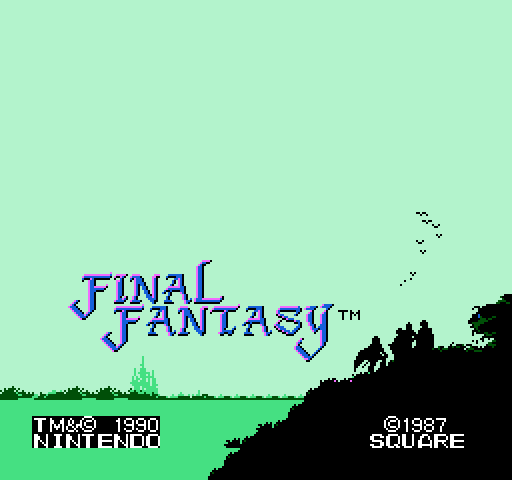 Since my dad has been home from the hospital I’ve spent several days a week at my parental unit’s humble abode helping my mom take care of the elder. (Sorry, dad! You’re still a ruttin’ buck!) Granted this job is rather boring when he’s passed out on the couch, which is a thing that happens quite frequently, so early last week I found myself sitting on the adjacent recliner, perusing my iPad, bored. Sure, I could have brought over The Last of Us and played it on their PS3, but I felt as though that wouldn’t have been the most, erm, soothing game to play next to someone who is trying to recover from a three day hospital stay.

THEN IT HIT ME. I didn’t blog about it, but before my dad’s surgery I bought my parents a Wii. Think of it partially as a sympathy present for my dad, and partially for a “HEY PARENTS YOU ROCK!” present. I hopped on the Wii Shop Channel and began scouring that bad boy. I was in the mood for something relaxing, classic and simple. Something I could just dink around, and seeing as I was in the middle of Resident Evil: Revelations at the time, I was also looking for something light and fluffy. SOMETHING WITH HAPPY FEELS.

And then it — Final Fantasy — appeared before mine eyeballs.

I think in all of my 25 years of existence I’ve only played five or so minutes of Final Fantasy I (which will henceforth be known as simply Final Fantasy), but for whatever stupid reason I quickly shut it off. In fact, I’ve only played Final Fantasy IX, X, XII and a little bit of XIII. (I’ve come *this* close to finishing VII and VIII, just never followed through.) Nevertheless I love the series (despite the weirdness as of late) and as soon Final Fantasy downloaded and splayed itself across the TV, I fell in love at the first bleepbloop. 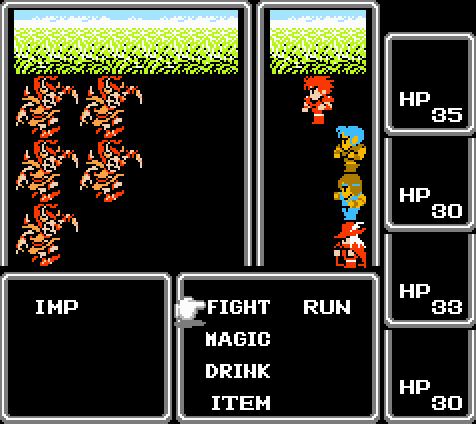 THIS GAME IS  ADDICTING. Honestly I didn’t think I’d become hooked; I thought I would just play a few hours here and there, but shit! I find myself hanging out at my parents until 11:30 almost every night so I can play the stupid (albeit awesome) game. And I know, I know… I could transfer the save data to my Wii, buuut  it’s kind of nostalgic playing at my parents’ house plus it allows me to help my mama, so it’s this thing called a win-win. But anyway, I’m absolutely loving the simplicity, the wonky armor and weapon equipping (DO YOU KNOW HOW MUCH MONEY I HAVE WASTED TRYING TO EQUIP MY CHARACTERS WITH THE WRONG ARMOR?!) the slow turn-based goodess, the music, the old school graphics, I’m somehow addicted to leveling, which is a veeery slow and tedious process in this game, but that’s okay. …ALL OF IT. I seriously love all of it. If you can’t tell.

Plus, it’s kinda cool for me to finally see all of those iconic sprites in action and make series connections, like the resemblance between the Black Mage and Vivi in FFIX, the White Mage and Freya, not to mention it’s so cool to hear the battle music and end-of-battle chime…man, it’s just a whirlwind of nostalgic feels. Anywho, after I finish Final Fantasy I’m going to dive into The Last of Us. My original plan was to play TLOU immediately following my completion of Resident Evil: Revelations, but I found myself wanting something that erred on the side of, like, not demonic, deep, creepy or depressing. Resident Evil: Revelations gave me quite a bit of that!

Now if you’ll excuse me, I have, uh, orbs to light up? I think that’s what I’m supposed to be doing. This game’s plot has gone over my head.

I know quite a bit of you have played Final Fantasy — any tips you’d like to share? Do you think FFI is one of the best  installments in the series?