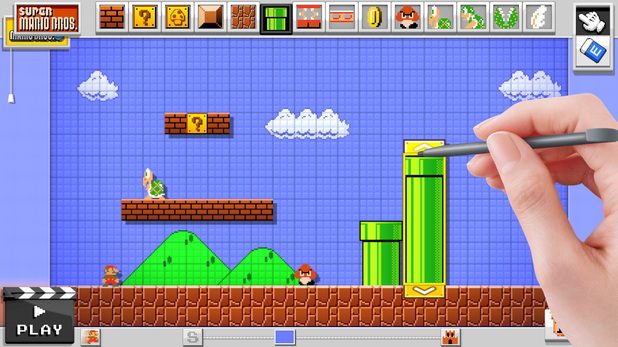 I’m not interested in Super Mario Maker for the purpose of creating obscure, crazy levels. Is that weird? I want to friggen’ PLAY the levels.

During my appointment with Nintendo I told my demo-er I only wanted to try out some of the infamously difficult pre-made levels, so she pulled up a screen and explained that the levels were listed in such a way that the easier levels were at the top of the screen, and the more difficult ones were towards the bottom. Me, being the bigshot I am…er, thought I was, scrolled to the near bottom and selected a level called “Ninja Training.”

I should have known better.

Perfectly placed spikes, springs and enemies ensured I was dying every few seconds. Like, whoever made that friggen’ level knew what they were doing, because like I said those obstacles couldn’t have been placed any more efficiently to ensure death. Now, I like to think of myself as a skilled Mario player, and the amount I was dying was seriously effing with my sanity, so I had to try over and over again before ultimately giving up. I seriously could have been there for HOURS. (I should clarify that it wasn’t so difficult that it was frustrating, but it was difficult enough that it was a FUN challenge. Y’know? I knew with tweaked timing and better precision I could have beaten the level. At least that’s what I’ve been telling myself before going to bed every night.)

But alas, I didn’t want to keep poor Demo Lady there for days (seeing as I only had an hour with Nintendo) so I hopped to another game. BUT. I’m sold on Mario Maker, not for the level creator (which I haven’t even dinked around with yet) but for the insane levels folks will undoubtedly be creating. I. Can’t. Wait.

Pulled from Polygon, here’s a level named “Not Scary if You Keep Running.” Nothing like what I played, but this should give a glimpse of the clusterfuck.