HOW FUCKING COOL IS THAT?! I’ll tell you, friends. It’s fucking cooler than a witch’s tit in December which means it’s pretty fucking cool. ‘Scuze the French. HAAAAAA GET IT. Y’know, because of the French Revolution and that’s the setting and oooooookay.

While I’ve never truly gotten into the Assassin’s Creed franchise, I love and and respect it like it’s one of my favorites. Is that weird? Whatever. I’ve only played the first Assassin’s Creed because I have this “MUST PLAY GAMES IN ORDER!” fetish, but it was a bit dated and extremely repetitive so I burned out rather quickly. I’ve watched friends play countless hours, though, and I know it’s a series I would really enjoy if I just made the time for it. (I mean, what’s not to love about beautiful graphics, captivating characters, sea battles, leaping into hay from ungodly distances in the air and learning a bit of history as you go?!) 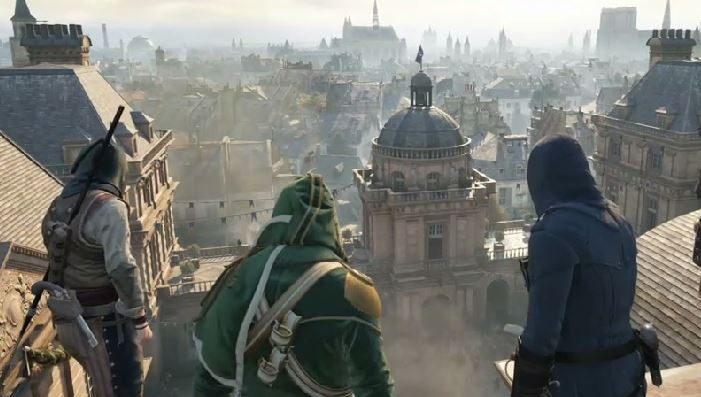 Now, I LOVE LOVE LOVE playing co-op. There’s something deeply warm and fuzzy about sharing the passion of gaming with another person, and uh, yeah, hi. Wasn’t I just talking about wanting to get into Assassin’s Creed? And didn’t I just mention something about loving co-op games? BLAMMO. DONE. LET ME JOIN YOUR BROTHERHOOD. I’m terrible as being stealthy and I have an antsy trigger finger, but I promise I’ll be the best and most enjoyable nuisance your brotherhood will ever encounter.