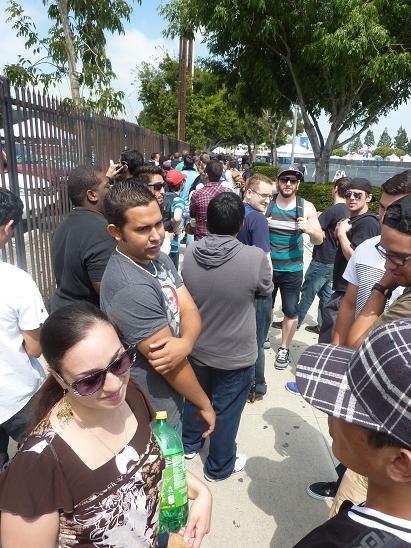 We were only given a few invites to the Sony conference this year, so if I wanted to go I would have had to stand in a line for, oh, four or five hours in the LA sun without any food or drink in a risky attempt to be one of the first 200 people in line. If I was successful I would be given a PlayStation Blog Community Pass which would allow me to A) Partake in the pre-conference festivities and B) Attend the conference itself.

Of course I waited in line. AND I WAS SUCCESSFUL. 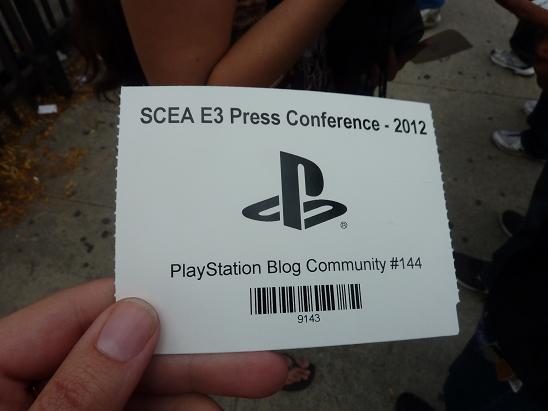 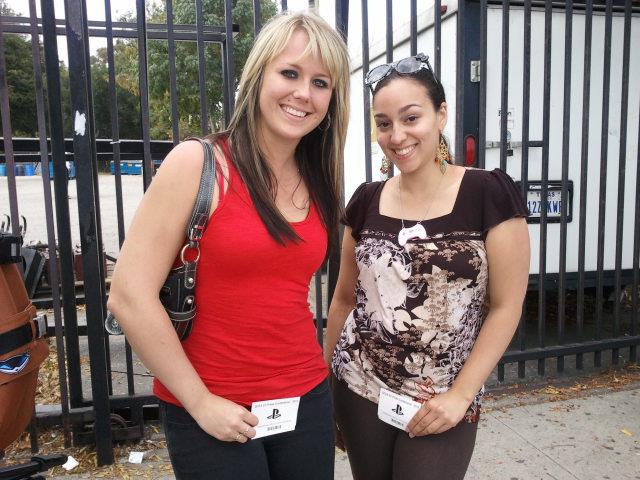 Fate also placed Sarah and I together in line. She is amazing and perverted and just as twisted as I am — in fact, it was her idea to place the passes in front of our girly bits. Don’t you already love her? Check her out. Anyway, after standing in line forever and receiving our passes we were ushered into yet ANOTHER line where we gave our contact information (it was later revealed that everyone who waited in line was given a free E3 pass, but seeing as I already had mine waiting in that line was a big waste of time) and finally were released into the Sony pre-party. 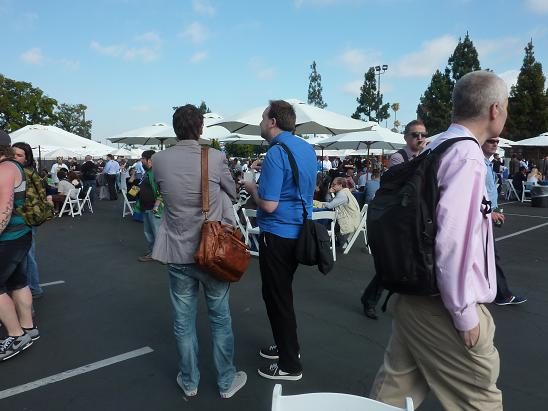 Sony does it RIGHT, man. This was my third year of attending their pre-E3 party and, yeah, they do it right. Tons of free food, open bar, music…they sure know how to lube up an audience! Not that they needed it — Sony, in my opinion, had the best press conference this year. 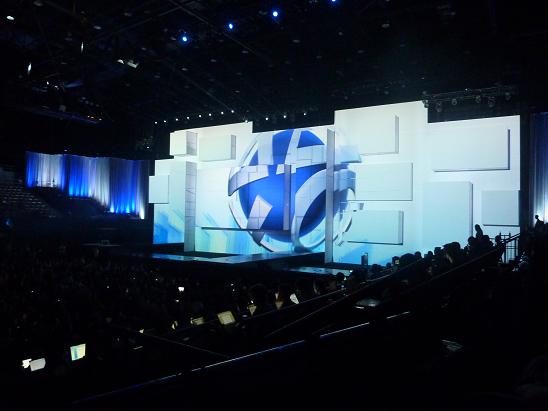 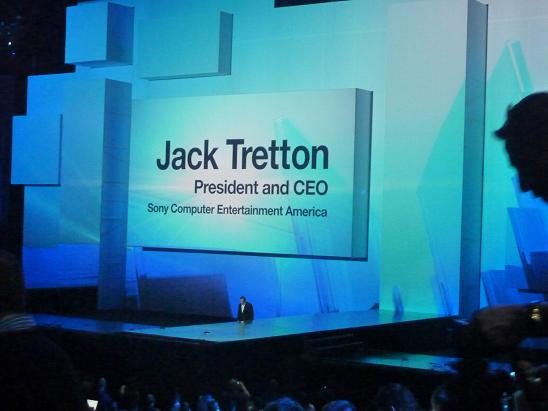 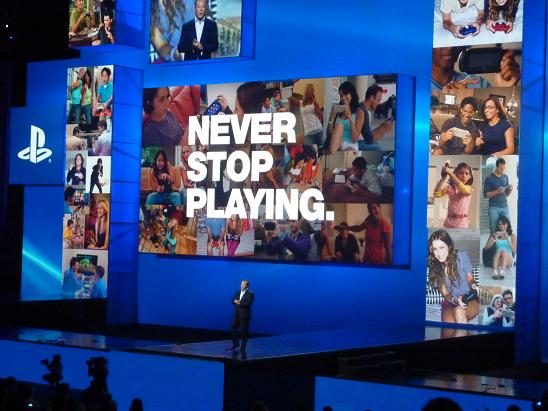 Jack Tretton came on stage and, uh, revealed their new catchphrase. Remember a few years ago when it was Kevin Butler with Move?  “THIS CHANGES EVERYTHING.” But the funny thing about that is that it changed, like, nothing. Anyway, I gotta give ya’ll a forewarning and tell you that I downed three beers in about an hour before the conference started so details may be a little fuzzy. But that’s what makes my conference recaps more interesting, right? My pure, raw, tipsy thoughts! …Right. 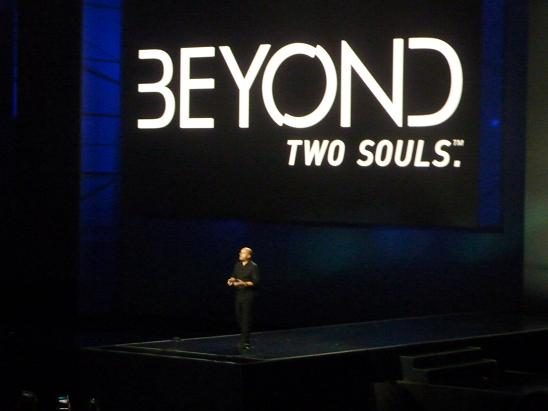 Here it is ladies and gentlemen — Quantic Dream’s new game. I really enjoyed Heavy Rain, and I just think David Cage (on stage) is a hilarious person who likes to shit on his games so seeing him unveil his new game was a treat. Yes, a treat. A sugary, sweet tangy treat. The main character, Jody, has a special friend named Aiden who is a spirit/ghost/abomination (aren’t they all the same?) who has been with her since she was a child. The game spans over something like 15 years of her life. COLOR ME INTERESTED, BATMAN. 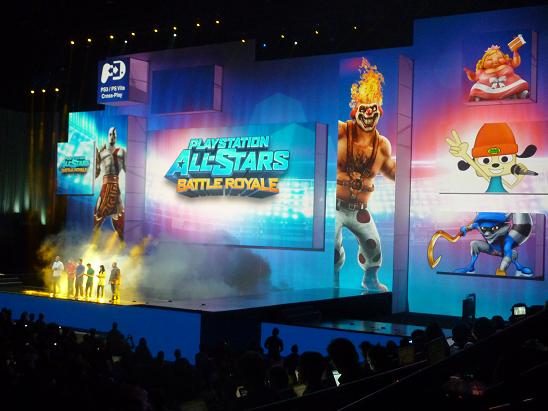 Have you heard of Super Smash Brothers? COOL! Then I don’t need to explain what this is. What IS something new and exciting, however, is the PS3/PS Vita cross play feature. That is rather spiffy. Nathan Drake and a Big Daddy were also announced as playable characters.

One Year Free of PS+ 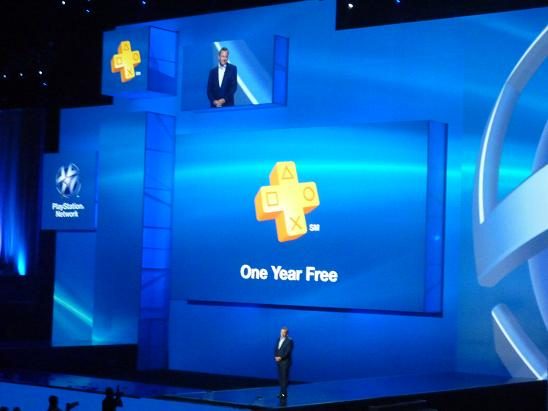 YEAAAH! Thank you Sony! About time I attend one of these conferences and receive something! ;D (Yes, I’m still butthurt from the Microsoft conference two years ago when they, you know, gave everyone in attendance a free, slim 360. THE ONE MICROSOFT CONFERENCE I DIDN’T ATTEND.) 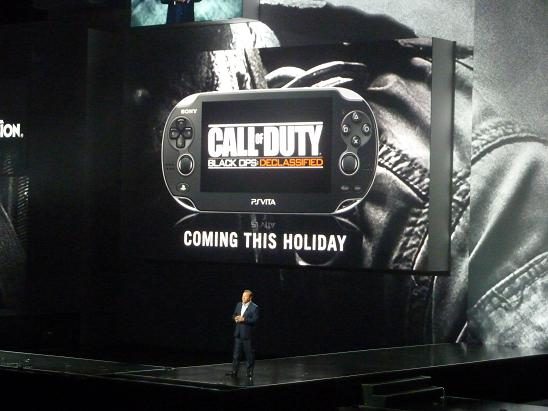 This was a thing that I think everyone and their mother was expecting.  I don’t know if I was just heavily buzzed, or if I missed it, but I don’t remember hearing any information about the game itself except that it’ll be out later this year. 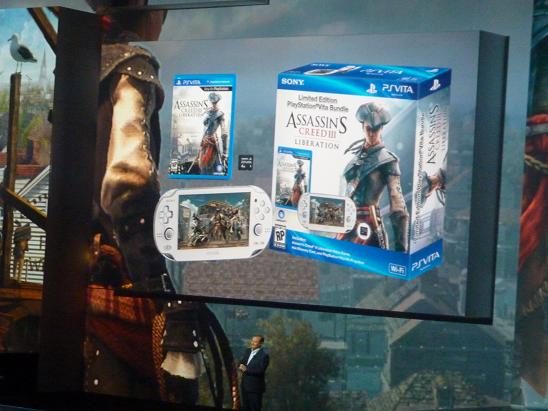 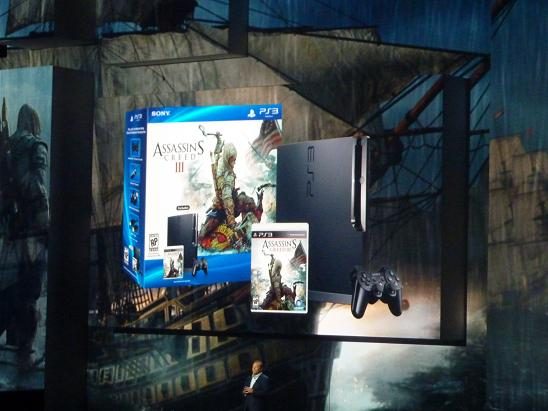 Unfortunately I was, ahem, in the little girl’s room when the majority of the ACIII footage was being showcased (DAMN YOU BEER!) but I made it back in time to hear about the PS3 and PS Vita bundles. I really need to get into that series…as well as every other series on this planet I haven’t dabbled in… 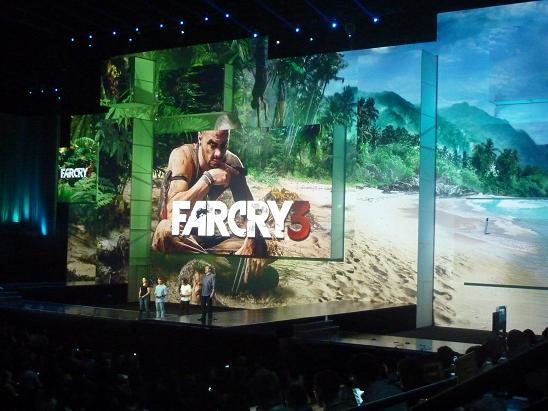 Correct me if I’m wrong, but wasn’t the big announcement re: Far Cry 3 the inclusion of four player multiplayer? Either way, I was able to play some of the multiplayer on the show floor and it was a LOT of fun! I’m new to this series, but I wasn’t surprised to learn that it controls a lot like the other FPS out there. The change of setting (Far Cry 3 doesn’t appear to take place in a barren desert located in the middle east) and the mini-missions within each level made it different enough that I got a lil’ excited. 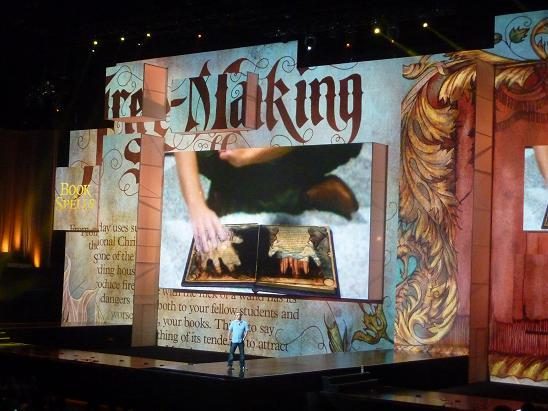 Okay, I’ll admit it — I’d like to fuck around with one of these. Not necessarily PURCHASE one, per se, but experience the *ahem* experience for myself. Especially if those Dragon Age novels become compatible ;D. But for serious, it sounds like this will cater to children and their crazy-ass imaginations, which COULD be a cool thing for gamers with little spawnlets. Also, there was a rather awkward moment when the woman demoing the Wonderbook couldn’t cast a fire spell because the Move wasn’t picking up her movements. “Well…this IS a live demo…” 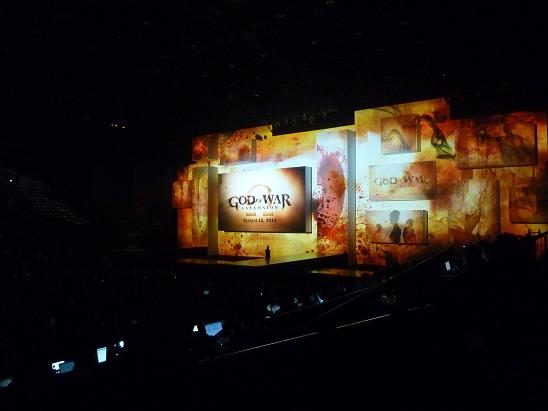 Sad confession time: I’ve never finished a God of War game. ::braces for impact:: I KNOW, I know — I suck. (Although  I DO have all of the God of War console games, including the HD collection. That has to count for something, right? Or does that make it even worse?) Even though I’ve never finished one of Kratos’ adventures, I can appreciate the awesomeness of the blood and gore that was in the God of War Ascension gameplay demo. It got the adrenaline pumpin’.

The Last of Us 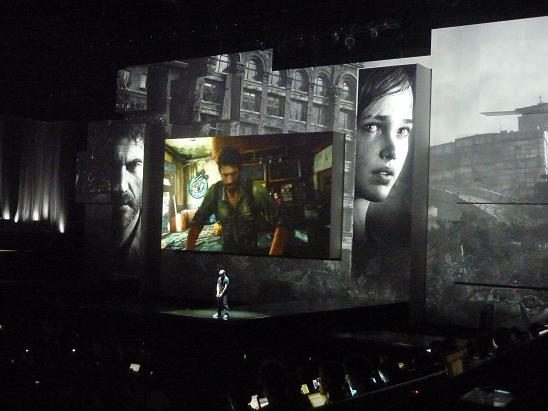 Speaking of getting the ol’ juices flowing –er, I meant adrenaline, The Last of Us simply looks amazeballs. Since this is being developed by Naughty Dog it looks a LOT like Uncharted in terms of gameplay, but I don’t see anything wrong with that — in fact, I’m already banking on The Last of Us being, like I said, amazeballs and therefore I’m not going to worry about gameplay, graphics, or anything — I just want to get to know the characters better. This was the best way Sony could end their conference and it made my pants a little tingly.

While I thought none of the conferences were super duper exciting, Sony’s was my favorite. I was really looking forward to seeing Quantic Dream’s newest game as well as more of The Last of Us. Sony’s free year of PS+ may or may not have anything to do with it as well. ;)

What did you think of Sony’s conference?