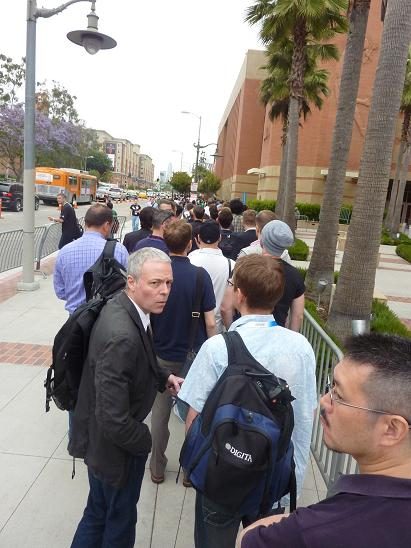 It’s the same story EVERY year with good ol’ Microsoft…registered or not, you must prepare to wait in an enormous-ass line. I thought I had arrived early enough to get prime seating, but alas I ended up sitting near the same area I did last year when I HADN’T even registered for the conference until the day of. But in any case, I think I caught this dude in front of me grabbing his crotch, so that makes it worth it. 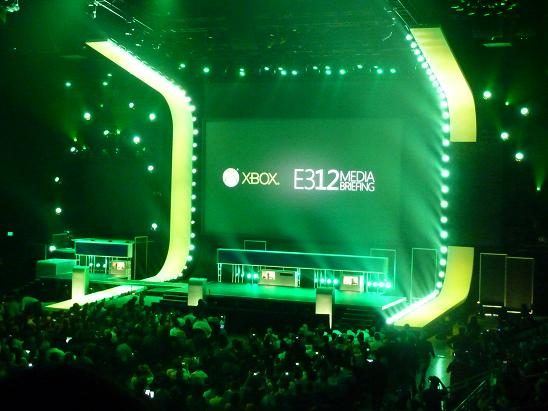 Like I told the person sitting next to me, I thought it looked like Shrek blew his load all over the conference floor. Ahem. Too raunchy? 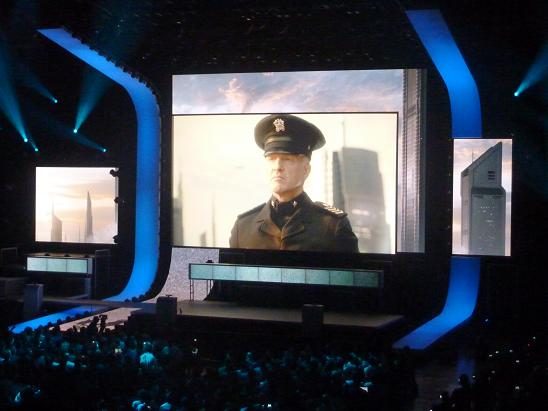 The conference began with Halo 4. I thought it was the best presentation overall, with the coordinating lasers, killer sound, beautiful graphics — oh yeah, did I mention this game looked beautiful? My eyes were seriously twitching with, uh, pleasure. Since I’ve only finished the first Halo and only dabbled in the second, I couldn’t distinct the new enemies from the old that were showcased, but from the sounds of it it’s a big freakin’ deal. 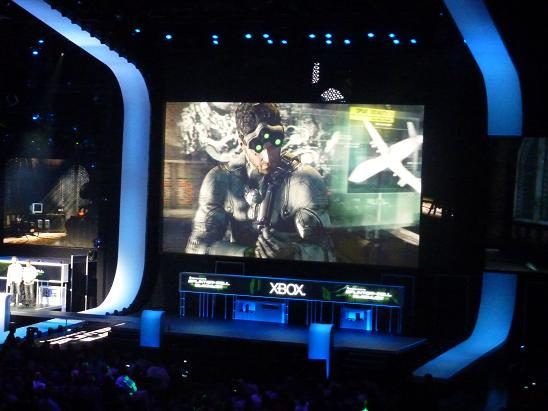 Never having played a title in the Splinter Cell series before, I must admit that live demo made my nether regions a bit tingly. I know the idea of stealth/combat/awesomeness isn’t a new concept, especially in the Splinter Cell franchise, but the tech Sam Fisher was using looked INSANELY fun, not to mention the game looked gorgeous. Do want. 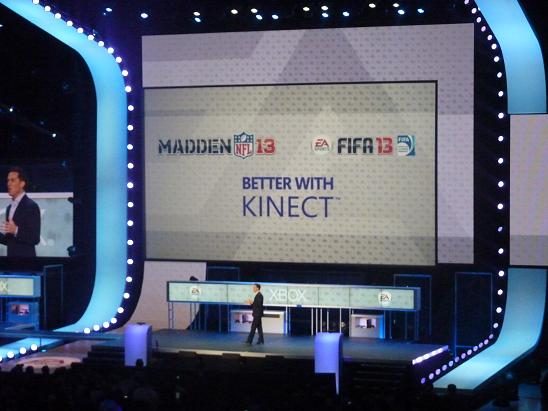 Wanna play soccer with your voice? Or perhaps call out plays and whatnot out loud? WELL YOU’RE IN LUCK, SPARKY! I personally don’t give a rat’s ass, but heeeey, to each their own. Joe Montana came on stage to demo Madden 13 with Kinect, which was pretty sweet. 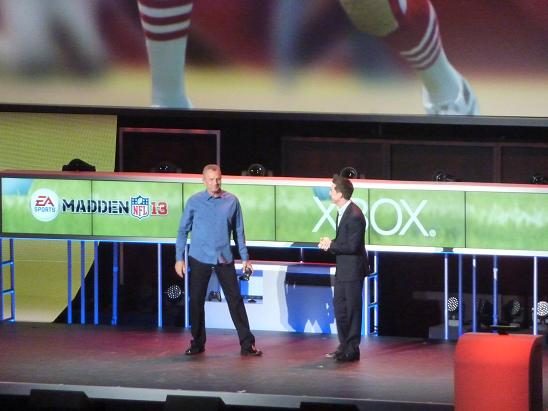 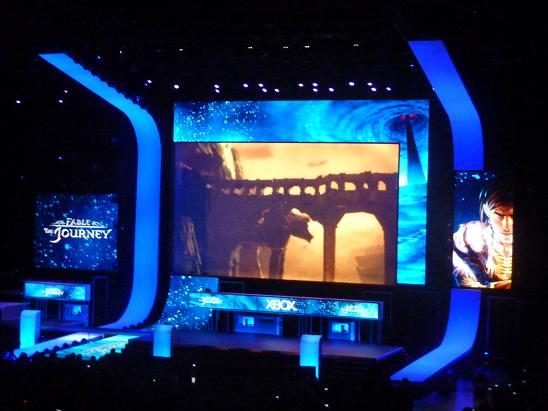 I was really, REALLY hoping lil’ Petey Molyneux would make a final Lionhead E3 appearance, seeing as Fable: The Journey is his last Lionhead game and all, but all was shown of this Kinect title was another trailer. I DID see this game being demoed by Lionhead staff on the show floor yesterday aaaand it didn’t look super responsive. I mean, it’s never a good thing when the actual development team has to demo a Kinect title. “Oh, what do you mean it’s not working? You’re just not positioning your arm right! I know it says to arch your arm, but you actually need to bend it at a 48 degree angle while moving your thumb and middle finger, then it will work! :D!!!” Or something. You get my point. 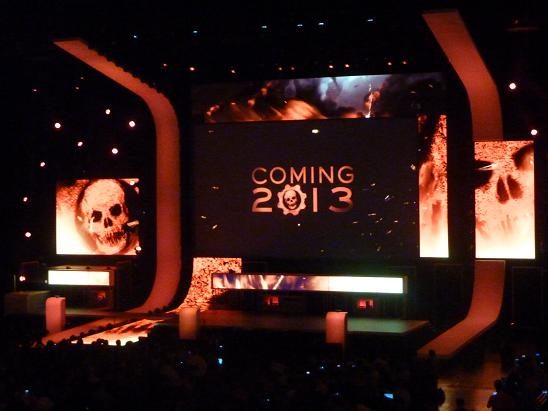 As with Fable: The Journey, all we got out of Gears of War: Judgment was a trailer but that was to be expected. The game was just announced in Game Informer, what, a week ago or something like that? It takes place after the first Gears. 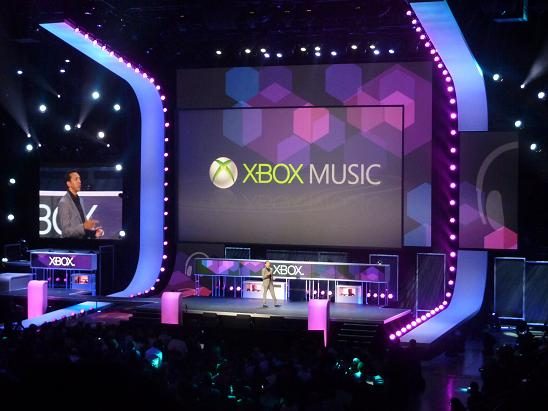 ::shoots confetti:: Uh, if anyone wants to explain to me why this is important, please, go ahead. Apparently it might destroy Zune? That’s nice. 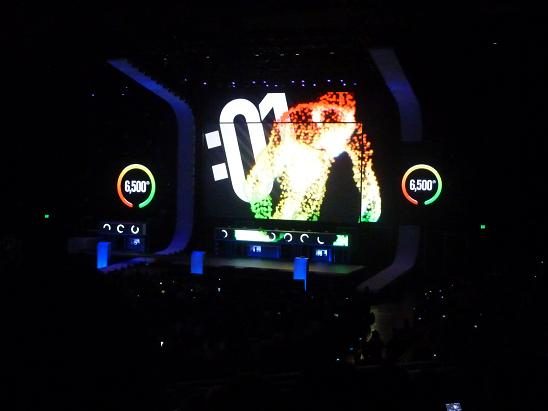 I’m going to be completely honest here and tell you that I paid about 27% to this presentation. My best guess is that it’s a Kinect title. Made by Nike. Also, there was mention of…Nike juice? What is that I don’t even. C’mon, bros — you’re presenting to millions of people who like to sit on their ass and move their thumbs. Not, like, their entire body. Zzzzzzzzzzzz #LazyBastard 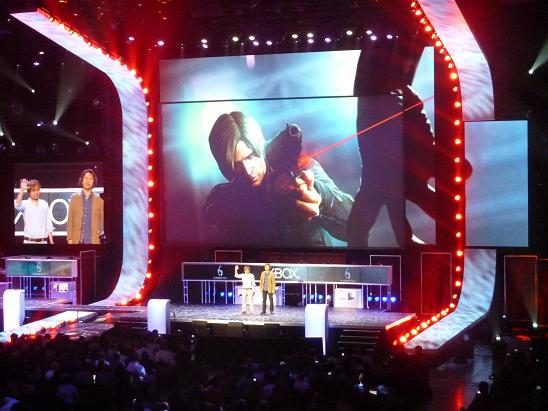 Yes, it looked a lot like Resident Evil 4 and Resident Evil 5 BUT I DON’T CARE WHAT YOU SAY IT STILL PLEASE THE RESI FANGIRL IN ME. There were zombie looking things! And Leon! And and and…that is all. It just made me very happy. Now all I want is the ability to examine briefcases and find hidden buttons and stuff. Also, Steven from Code Veronica. (DON’T SAY ANYTHING.) 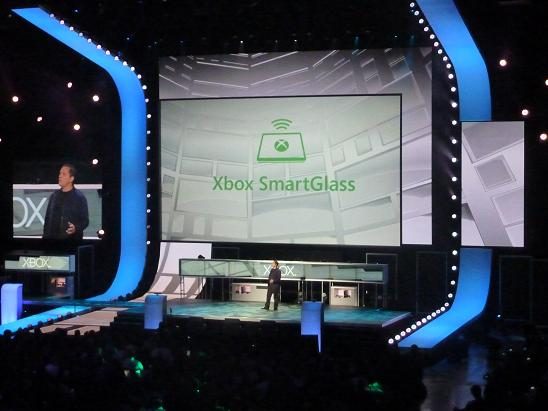 In my opinion, this is Microsoft’s answer to the Wii U Gamepad screen. It’s practically the same thing and performs the same duties but instead of being on the actual controller it’s going to be a thing via your mobile devices (phone, pads –heh, pads — or anything web enabled). But it sounds like Microsoft is working with television series (possibly movies?) to get supported content for SmartGlass and I don’t think Nintendo has touched on that yet. 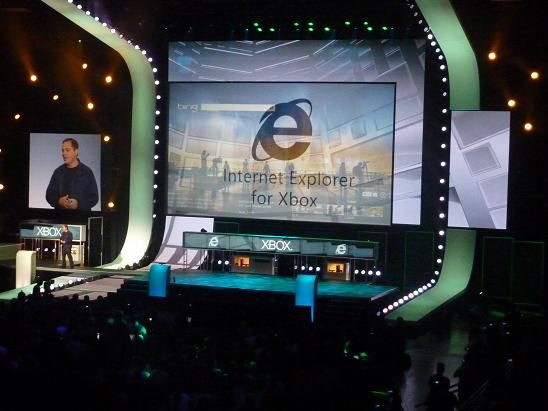 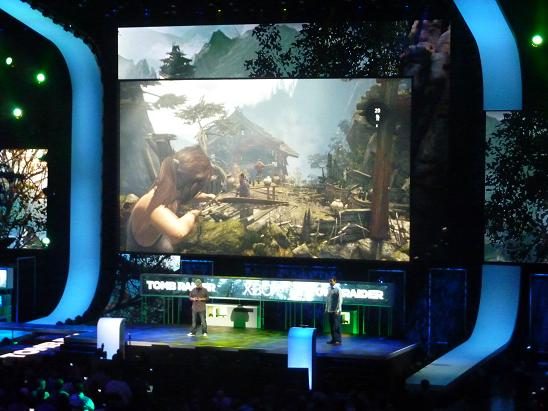 Oooh, this looks SO good! Nathan Drake an Laura Croft need to come together and produce millions of action/adventure offspring. I would totally adopt one. But anyway, I’ve never been a huge Tomb Raider fan (I used to play the demos, but I was scared of the tigers that tried to eat me and therefore I never asked mommy or daddy to rent the actual games :/) but now that I’m older and not so scared of ferocious animals trying to nom on my brains and whatnot I’m SUPER pumped for Tomb Raider. So much action…so much bow and arrow usage…so…pretty…I guess the one thing I was bummed about was the lack of moaning and groaning from Miss Laura during this presentation. Remember last year’s? “UNGGH!” “OOOH!” “MMMOW!” “HNGGGGH!” 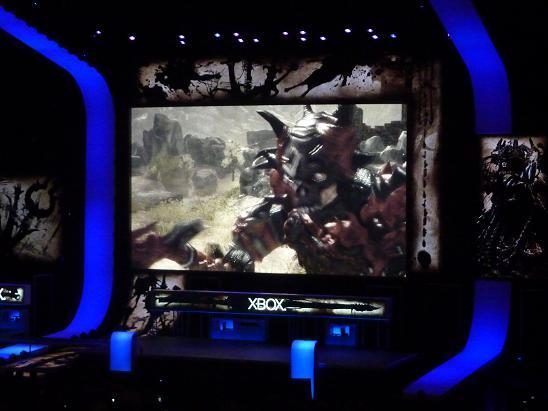 Now THIS looks like it has serious potential. It was announced with two other games — Matter and something else — but Ascend: New Gods stood out. I haven’t gone hands-on with it yet, but I’ve read some previews and it sounds to be a God of War/Demon’s Souls hybrid. Okay, yeah, that’s pretty awesome.

South Park: The Stick of Truth 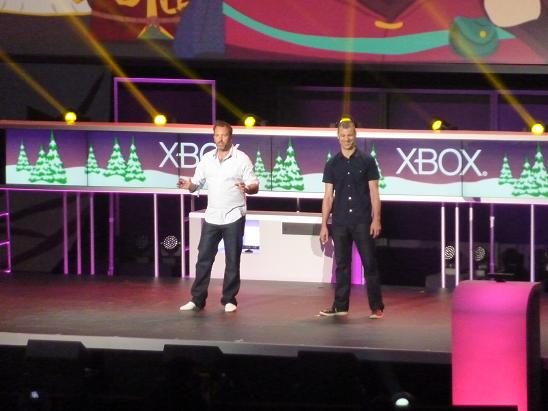 Trey Parker and Matt Stone came on stage to talk about South Park: The Stick of Truth. I’m not even going to try to hide my excitement for The Stick of Truth. The hilarity of South Park? Check. RPG elements? Check. Obsidian Entertainment? Check.  And, um, yeah, I’ll be able to create my own South Park character. FUCK. YES.  It’ll be interesting to experience the “lay of the land” of South Park. Trey and Matt said they were forced to come up with the actual layout of South Park, as they can’t just “cut” to the homes of the characters. Yeah…creating an open-world game will force you to do that! ;) 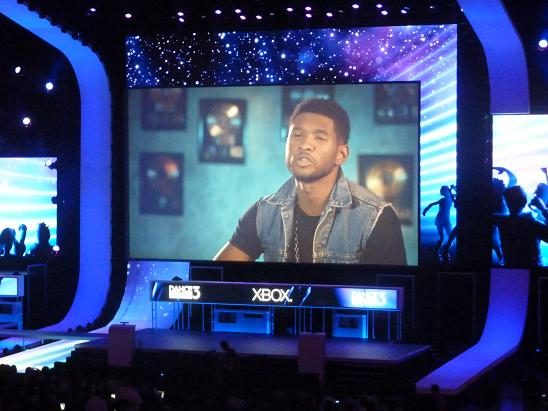 Same game, different number. But hey, it’s all good — I enjoyed Dance Central. However I guess the big deal about this entire thing is the performance by Usher. 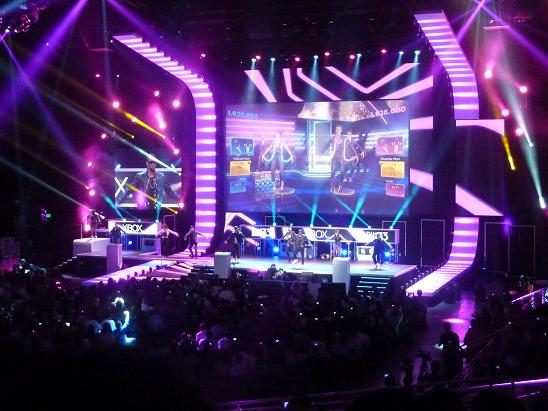 I gotta give him props- — dude can PERFORM! It was kind of awkward when he asked the entire audience to stand up and dance and partake in other acts of tomfoolery and no one did. A-hem. 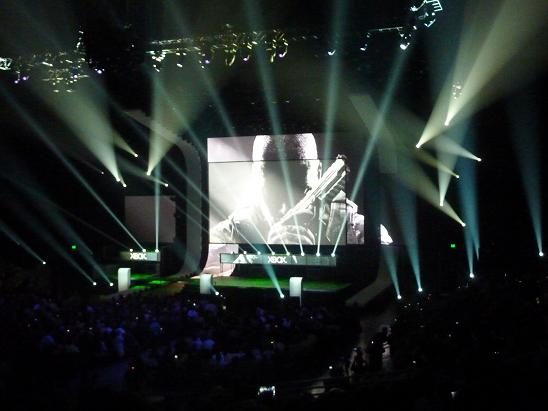 What better way to end Microsoft’s E3 2012 presser other than with Black Ops 2? I’ve played MW, MW2 and Black Ops — and, personally it didn’t seem to stand out as anything different from the rest. I know the “cool” thing about BO2 is the futuristic technology and whatnot, but I didn’t see enough of it in the trailer to get me all sorts of excited. Either way, it will go on to sell ka-jillions of copies. <3.

All in all I enjoyed Microsoft’s conference. Although there weren’t any ground-breaking announcements (I wouldn’t call SmartGlass ground-breaking) we were finally able to see some awesome footage of Halo 4, Splinter Cell, Resident Evil 6, etc. Oh, and those Usher, John Madden and South Park dudes showed up as well.

What did you think of the Microsoft Conference?