Okay, so the Qunari launched their (predicted) war against Kirkwall. I get it, they had every right to be pissed off. Four of their messengers were captured and killed under the Divine’s name (unbeknownst to her, it seems), mother Patrice or whatever killed the viscount’s son (who had just converted to the ways of the Qun, or something, I think the conversion has an actual name) and THEN Aveline and I tried to take back our elven convicts, but since they had converted as well they were under the protection of the Arishok. So they weren’t too pleased when we tried to, um, take them away.

Like I said above, I saw this war coming from a mile away. Actually, the dead giveaway is the Dragon Age II trailer itself, as the entirety of it consists of the battle between the Arishok and the Champion. Because I had seen the trailer at least a million times, I recognized the Arishok the first time I saw him. And when I saw the viscount and the crown atop is bald little head, I put two and two together and VOILA!

Actually, the first time I saw the DA2 trailer I thought the Arishok was a new breed of Darkspawn. If someone had told me that that thing was a Qunari…wait. WAIT. Is that Arishok the same when Sten talks about in Dragon Age: Origins?

Oh, speaking of Sten. HAHA. Hmmm. Okay, so when I was embarking on Isabela’s quest to acquire her relic, I saw a group of Qunari waiting for us. Before I initiated interaction with them, I stood back from afar and ran my curser over to see…fuck, I don’t know why I did it. I knew they were Qunari. Anyway, I saw this: 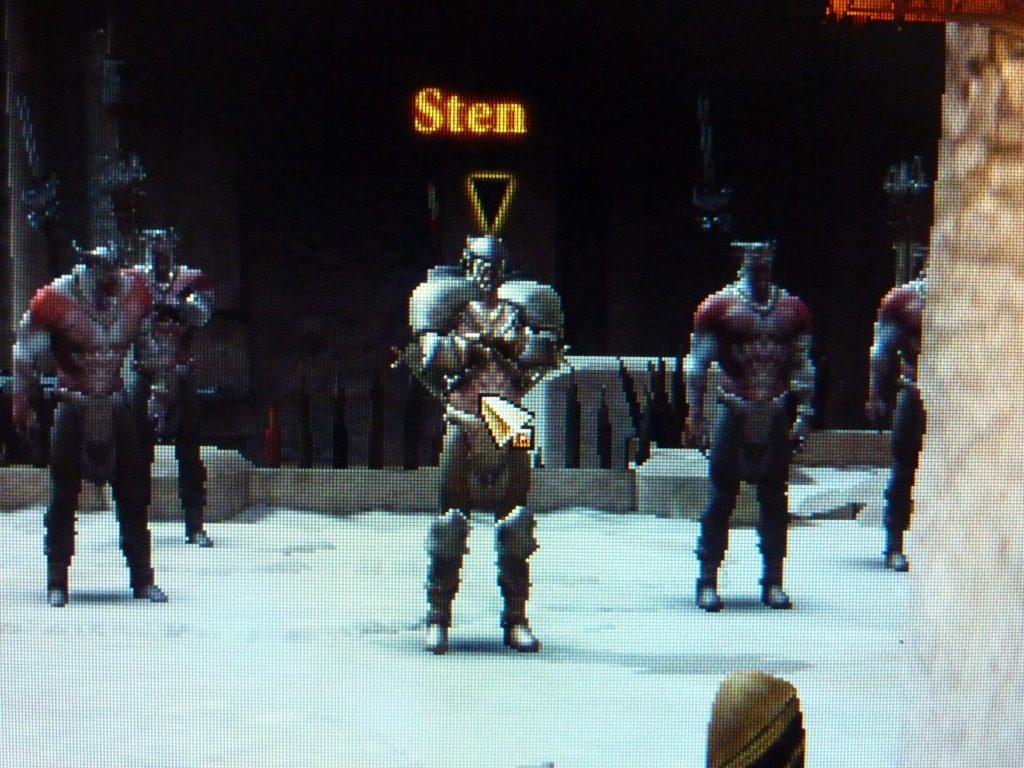 This is embarrassing but I’m going to tell you anyway. I squealed “STEN!”, paused the game and jumped up and ran into my living room so I could retrieve my camera and take the above picture. I seriously wish I could show you the flamboyant walk/dance I was doing throughout my apartment. So I get back to my desk, take a picture and resume the game.

The next thing I know, my party initiates a battle with the group of Qunari. And before I know it, I’m killing Sten.

I absolutely REFUSED to fight my old comrade, so I stood back and whimpered as I watched Sten’s health meter deplete. I watched in horror as he collapsed to the ground. I figured at this point a cut scene would initiate and he’d be like, ohai, bahbahbah I’m Sten. But he remained still. No cut scene followed.

I was fucking PISSED. I had to pause the game and fume for a few minutes.

I thought, seriously Bioware? Did I actually just kill Sten, my companion from Dragon Age: Origins? REALLY?! Why would you do that to me? Even worse, he went down so easily! Sten would have put up a real fight! Sten was a proud, strong and honorable warrior; there is NO WAY he would have fallen so quickly! I really liked Sten as a character, and for his ending to come by my hand… MOTHER FUC-

I recalled a conversation Sten and Zevran had in DA:O. Sten told Zevran that Sten was not his name, but his rank. Therefore—oooooooh. Oh. Okay. Got it. There are many Stens.

Needless to say, I felt stupid. I felt even more stupid as I came across several more Sten in the following minutes. But that’s okay. I justified my bitchfit by reminding myself that I happen to care about my fake friends, that’s all.