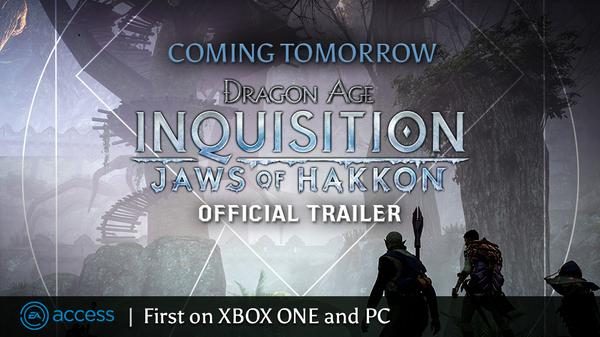 Despite the somewhat confusing text on the above teaser, the DLC *is* releasing tomorrow for, again, Xbox One and PC. The wording makes it sound like only a trailer will be made available, but BioWare’s Aaryn Flynn (he’s one of my favorites <3) has confirmed it will be DLC.

Worth emphasizing that it’s “timed” DLC whiiiich means it will ultimately come to PS4. But when you’re as obsessed as I am it’s nothing short of pure torture knowing there’s additional Dragon Age content out there, looming, calling my name, but inaccessible. ;____;

While the love I have for BioWare and Dragon Age is overpowering this urge I have to rant and rage about console exclusivity, I’m not sure how long the power to withold will last, so I must take my leave.