So THIS is a thing that was officially announced today.

You may be shocked to hear that I’m relatively calm following this morning’s announcement. One would think that I would be foaming at the mouth and flopping around on the floor like a Magikarp out of water, as that’s what I tend to do following ANY Dragon Age announcement, but I’ve kept myself in-check.

After all, what was really announced?

2) It’ll arrive late 2013. To be expected.  Hopefully we’ll have this bad boy in our hands around this time next year. Also, chances are well and good that this bad boy will launched on next-gen consoles.

3). It will be built on a new RPG engine using DICE’s Frostbite 2. Okay, this makes me tingle. THE POSSIBILITIES. DKJJDAKLFJDKLAF. ALISTAIR I WANT TO SEE EVERY STAND OF YOUR HAIR. ::calms self:: I remember reading somewhere a while back that the DA development team admired Skyrim’s huge-assness, so perhaps with this new engine they’re aiming for a game of the same magnitude. Yes, please.

Aaaand that really sums it up, unless you want to count some of the development team details, but there’s really nothing panty-wetting to report.

I’m going to stick to my guns and predict Dragon Age III will revolve around the clusterfuck that is (I should say will be) Orlais. We’ll also dive into more deets regarding Flemmeth and Morrigan’s demon-child. Also, Alistair will become an IRL pre-order bonus and will live in my bedroom.

…okay. So maybe I’m a LITTLE excited after all. ;D

“The Dragon Age team has been working on Dragon Age 3: Inquisition for almost two years now. We’ve been poring over player feedback from past games and connecting directly with our fans. They haven’t held back, so we’re not either. With Dragon Age 3: Inquisition, we want to give fans what they’re asking for – a great story with choices that matter, a massive world to explore, deep customization and combat that is both tactical and visceral.” –BioWare Edmonton and Montreal general manager Aaryn Flynn

YOU’RE SAYING ALL OF THE RIGHT THINGS BIOWARE. Please don’t boner-kill me. </3.

After all, I need more things to put in my Dragon Age shrine. 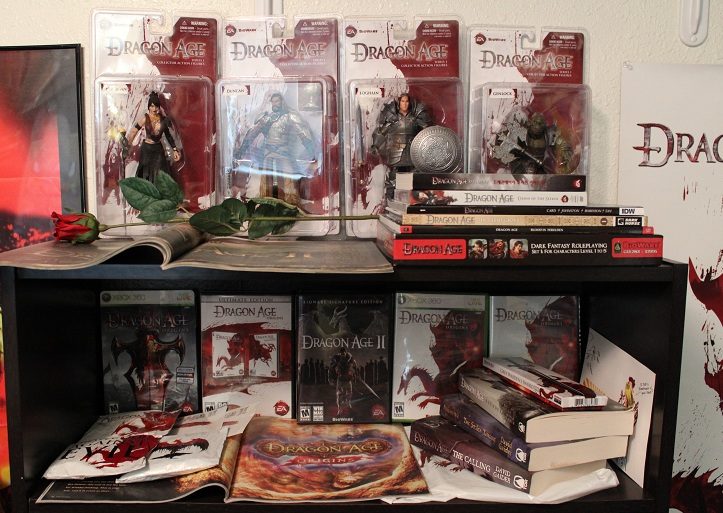