Y’know, this game is really starting to grow on me, regardless of the fact that I’ve spent the first 18 hours of the game in Kirkwall and its surrounding areas in order to complete 50-odd side quests.

MY GOD, the side quests. Do they ever freakin’ end?! Apparently Hawke is supposed to become the champion of Kirkwall (unbeknownst to me until someone told me on Twitter) so I can understand if a few quests here and there need to be completed to build up the rep or whatnot. But I can’t get over the sheer amount of side quests I’ve encountered so far! There are collecting quests, rescue quests, companion quests, combat quests, quests, quests, quests. Thank Andraste for the quest locators (yeah, I just did that). Otherwise, there is no way in hell I would spend hours of my time blindly wandering Kirkwall (not to mention its surrounding areas) hoping to find the correct location, person or item I need to complete a quest. NO. EFFIN. WAY.

Now in regards to actual story progression, I’ve gotten a few more details about where this mysterious story in DA2 might take me. For starters, I’ve recruited all of the characters I’ve heard about. I’ve got a good gaggle of people in my posse already, but I’d be surprised if I’ve recruited all of them. After all, Anders and Fenris are the only dudes in my par-tay. I want a Qunari.

Bethany: My dear 18-year-old sister that I never have in my party. I think there will be a lot of conflict in the story that stems from her, you know, being an apostate and all that. Truth be told, I haven’t interacted much with Bethany. I ALREADY HAVE A MAGE (see: Anders).

Anders: Anders, Anders, Anders…I have my eye on you, boy, and you better not let me down. The first time I tried hitting on him he stopped me and said “maybe a year ago we could have had something” and that he’ll just break my heart. WHOA. Who said anything about falling in love? I was juuust trying to get my mack on, brah.

But in all seriousness, I find Anders to be a mysterious character. He’s so passionate about his beliefs regarding the Circle and the Mages, yet he’s very fair in his approach. At one point he told me that mages who claim to hate the templars make his blood boil, because (I’m rewording this) hate just breeds more hate. Another side of him is completely boyish and goofy (calling Ser Pounce A Lot a noble beast, and he meant it too) but then…there’s another side. The glimmer into this other side of his came via an in-game conversation between him and Isabel. During this conversation I learned that Anders recognized Isabel from The Pearl (a brothel) in Denerim and that Anders (according to Isabel) “was that runaway mage that could do that thing with electricity” and it “was niiiice”. ORLY?!

I’m worried that something is going to happen with Anders that will fuck everything up. LOL. I’ve read random tweets that say nothing more than “DAMN YOU ANDERS!” and “Let me know what you think about Anders towards the end of the game”. WHAT IS GOING TO HAPPEN?! DON’T TELL ME. I don’t know near enough to take any educated guesses, but I’m going to assume the Circle of Magi will be a huge factor in this game (actually, someone kinda told me that a few months ago. Whether they were lying or not, I dunno. BOO.) and Anders will do something stupid that will make me cry. Kind of like when Alistair sacrificed himself for my Grey Warden in Origins. That asshole.

Fenris: Fenris is another interesting character. Like I said before, he reminds me of Thane from Mass Effect 2. A serious dude, with a broken and troubled past. He may even carry a burden on his shoulders. He is very wary of mages, therefore him and Anders bump heads quite often. In fact, I got so sick of his oh-so-serious views on everything that I switched him out of my party. Anyway, he wants to go to Seharon, as that’s where he’s been told he’s from. He’s been on the run from this Danarious guy for three years now, who is a slaver. I want to say Danrious is a Magister? So, yeah, I can see why Fenris wouldn’t be all bubbles and rainbows on the inside.

Aveline: She’s like the mother figure, and she’s boring, though I don’t necessarily mean that in a bad way. She has a distinct (albeit BORING) personality, and now that I’ve met more interesting characters, she has a place within my group. Just not my immediate party.

Isabela: I LIKE THIS CHICK. I knew I liked her as soon as she told me, “You’re nothing but tits and ass to the men in this place, and they won’t hesitate to grab at both.” She was a captain of a ship, but she won’t tell me how it crashed and is vague on other details of her life. Inside that tough outer shell is a vulnerable woman who wants a good, strong shoulder to cry on. It better not be Anders’ shoulder or there will be dire consequences. She also avoided the Qunari when I visited them in Kirkwall. I wonder if her and their ship fought and that’s how her ship wrecked? HMMM…

Also, she uses my favorite phrase of all time. 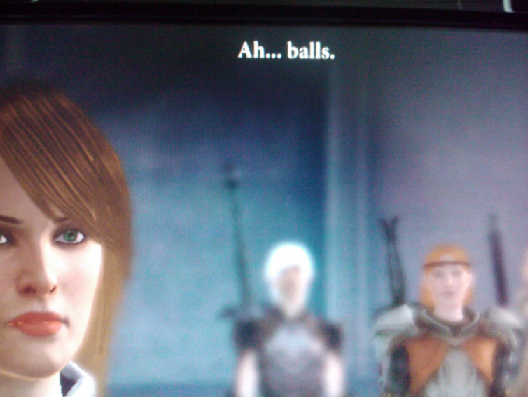 Merril: Uh, I’m convinced that Merril is the cutest character created in the history of FOREVER. She’s so adorably awkward, I can’t stand it…actually, she reminds me of how I act when I get nervous. I still don’t know why she had to leave the clan, and according to her old keeper, Merril chose this path for herself. I don’t know much more, other than that.

Varric: This guy is awesome. Not very dwarven (like Oghren was) and you can tell he was raised on the surface. He seems like he could be a genuine friend of Hawke, but I still don’t know why he’s being interrogated in the beginning, nor will I for a while. I don’t think it’s from him being a traitor. If it is, though, I’m going to look back on this and laugh. I think I’ll find out more about him when I venture into the Deep Roads.

GAHHHHHHHH. Is that how she’s still alive!??! Bah.

YOU MAY HAVE SAVED MY LIFE. Just as how I’ve saved yours. FUCK. The son is going to pwn her. FUCCCCCCCK. “you have my thanks…and my sympathy.”

I’m guessing that the main plot of DA2 is going to revolve around the Circle, Secrets of the Truth and the templars. There have been far too many quests and conversations about that clusterfuck for it not to continue being an issue.