Do you remember my “Can You Tell I’ve Missed My PS3?” post from earlier this week? Well, I wasn’t entirely honest with you guys.

You see, in order to make my way to the PS3 section–where I ultimately nabbed Portal 2, inFamous 2 and L.A. Noire– I had to walk past a very enticing, very sexy Zelda: Ocarina of Time display. In fact, it was so alluring that I stopped to stare. I even asked  a nearby clerk (half-jokingly)how much she’d sell the display for. Unfortunately, the biatch didn’t take me seriously, and only chuckled and walked away. Sigh.

Anyway, I ogled the display for some time. And for just a smidgen of a second I considered grabbing a copy of Ocarina of Time. I mean, why not? WHY NOT?! Because I don’t own (and wasn’t about to own) a Nintendo 3DS, that’s why not. So I stopped myself and continued on my destined path to the PS3 games.

A few minutes later I emerged from the Sony section with the aforementioned PS3 games, and the same clerk—the one who wouldn’t sell me the Ocarina of Time display—offered to ring me out at her register, WHICH JUST HAPPENED TO BE RIGHT NEXT TO THE FRIGGEN’ OCARINA OF TIME DISPLAY.

“Okay, fate, destiny, whatever you are,” I thought to myself. “I see what you’re trying to do here. AND IT’S NOT GOING TO WORK!”

My friends: on top of inFamous 2, Portal 2 and L.A. Noire, I did NOT leave with a Nintendo 3DS, nor did I leave with a copy of Ocarina of Time.

…But I did leave with this: 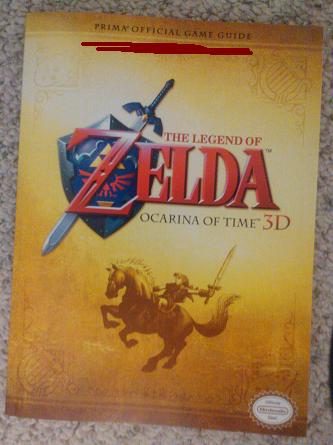 BECAUSE THERE WERE ONLY TWO GUIDES IN THE STORE AND THEY COME WITH POSTERS AND BECAUSE I WAS SEDUCED BY THE SEXY DISPLAY AND BECAUSE I’M AN IDIOT.

Litterally, here was my thought process: The 3DS? It will always be available. Ocarina of Time 3D? That game won’t be discontinued anytime soon. But the guide…mmm, the guide, those things tend to go out of print sooner rather than later. ::grab::

Sometimes I just don’t understand myself.