The annual Child’s Play Charity Auction always seemed to elude me. What feels like, shit, for the past few years I’ve ALWAYS found out about the event the night of. Which is futile because the event always sells out of tickets way ahead of time. Grrrr…

Oh! If you’re like one of the umpteen people who, upon hearing of Child’s Play, were all, “Uh, what are you doing celebrating charity of a possessed, freakish redhead doll?” I shall explain. Er, I’ll have Child’s Play explain.

“We’re pleased to invite you to the 2013 Child’s Play Dinner and Auction, celebrating the 10th Anniversary of gamers giving back. That’s right- in November of 2003, gamers from around the world united to make the holidays brighter for kids at Seattle Children’s Hospital. Ten years and nearly 90 hospitals later, Child’s Play has raised over $17 million for sick kids. Join us for a delightful evening of geeky curiosities, bidding wars, delicious dinner and some extra-special 10th Anniversary celebrations.”

Cool beans, rah? So yeah, this was a thing I wanted to attend for quite some time. The event has a reputation of being a collector’s wet dream, with rare and one-of-a-kind items and opportunities being offered up for a charity auction. It makes spending WAY too much money justifiable.

And don’t forget, the last time I participated in a gaming charity auction of sorts I ended up dropping nearly a grand on the Uncharted: Fortune Hunter’s Edition, so I was keeping a tight grip on my wallet. I knew this, though — if the auction had ANYTHING Legend of Zelda or Dragon Age related I was going to be in big trouble. I had already decided I was not going to hold myself accountable for my actions should that situation arise.

In true Britt-fashion, I arrived to Child’s Play fashionably late (speaking of fashionably, everyone was dressed SUPER snazzy! Tuxedos, ballgowns, etc. It was like nerd prom and I loved every second of it) and I hit the tail-end of the opening event, the silent auction. Think of a huge room filled with BUTTLOADS of tables, which were filled with BUTTLOADS of awesome nerdery. It was the main socializing room before the dinner and auction started. So unfortunately I was only able to peruse maybe half of the tables, but these caught my eye! 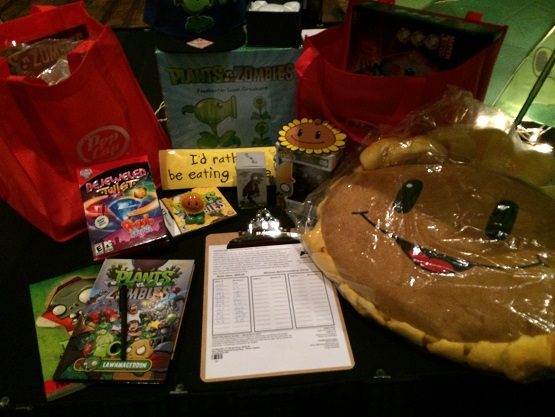 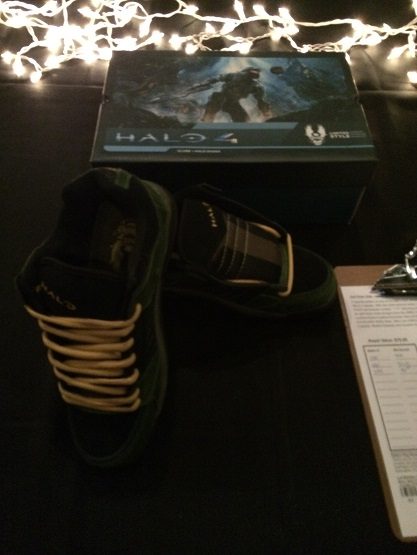 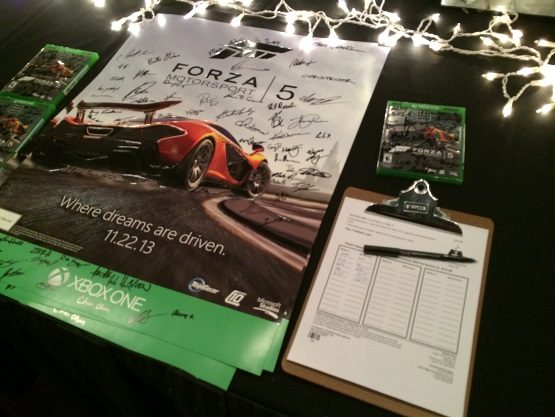 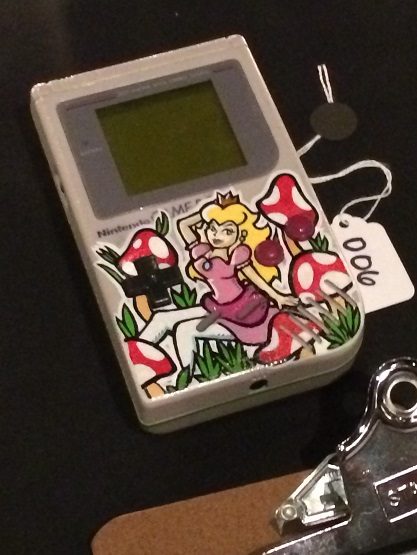 I was thinking to myself, “Hey! This stuff is really cool, but it’s nothing I think I really need. I mean, I’d love to have it—” And then, my friends, literally 20 seconds or so before the silent auction was due to end I spotted this: 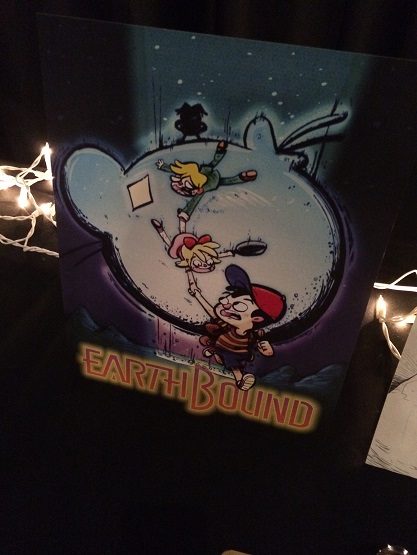 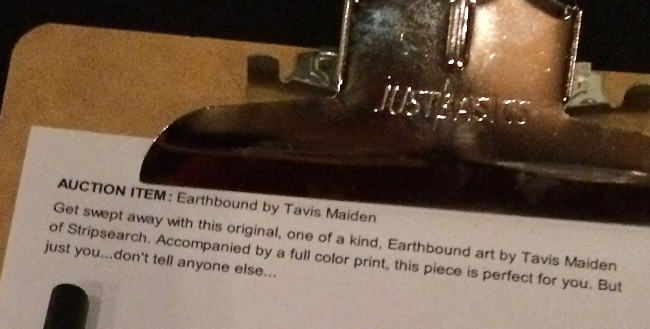 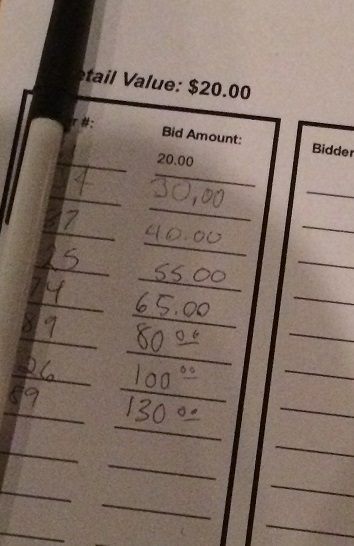 Hey, do you want a tip? Do NOT have a shot of whiskey (or two) before attending auctions. Errrrr next thing I knew I had written down my bidder number and placed a bid of $200. I WAS NOT GOING TO BE OUTBID. I can’t definitively say I wouldn’t have bid on this Earthbound piece if I were stone-cold-sober because it IS Earthbound, and Earthbound is like, the shit. I know I’ve said this many times on this blog, but it’s one of my favorite games of EVAR and I have very sweet, nostalgic memories stemming from the game.

It had to be mine.

Like I said above, the silent auction only had 20 or so seconds remaining, so after I made my bid I stepped away and perched. A few people walked by and eyed my bid, but thankfully it was enough to scare them away. MUAUAHAHAHAHAHAHA!!!

The silent auction ended and the dinner began. 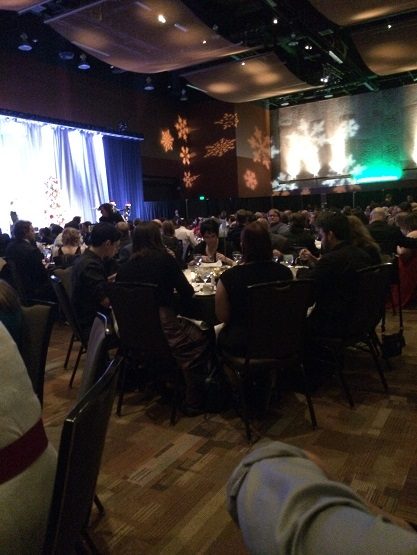 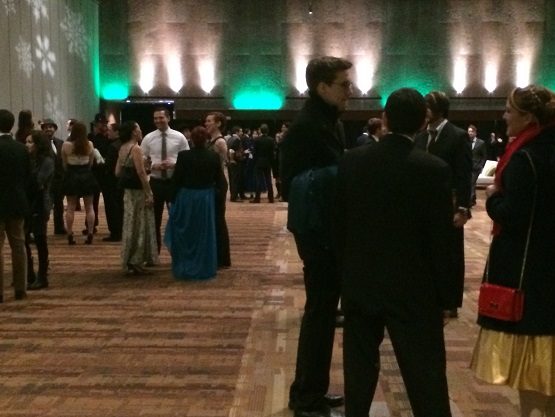 After the auction ended, everyone was invited to stick around for a cocktail hour. But, uh, I wore VERY uncomfortable shoes (sadly Chucks wouldn’t have gone with my dress) so I had to peace out rather early as every step felt like my feet were delving into the depths of Hell. BUT I was able to pick up my Earthbound art! 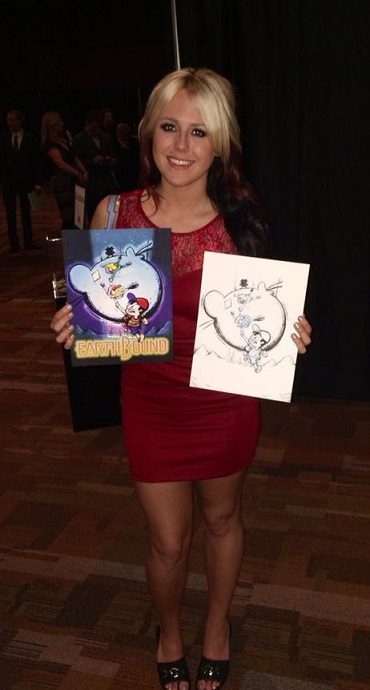 So, yeah. That was a pretty rad night. An expensive night, but a rad night nonetheless.

Have you ever bought an item of the gaming paraphernalia variety for charity?