I’ve recently gotten back into the Pokémon Card collecting scene (mostly so I could be considered a cool kid again), but I gotta be honest guys, that excited, anxious feeling of “OHMYGOD OHMYGOD” I used to get while opening booster packs is kind of…gone. Don’t get me wrong, it’s still exciting to open up a pack and get a whiff of that freshly opened pack smell (the original aphrodisiac) but I’m finding the contents inside are a little on the lame side.

Let me show you the contents of my most recent Pokémon booster pack purchase: 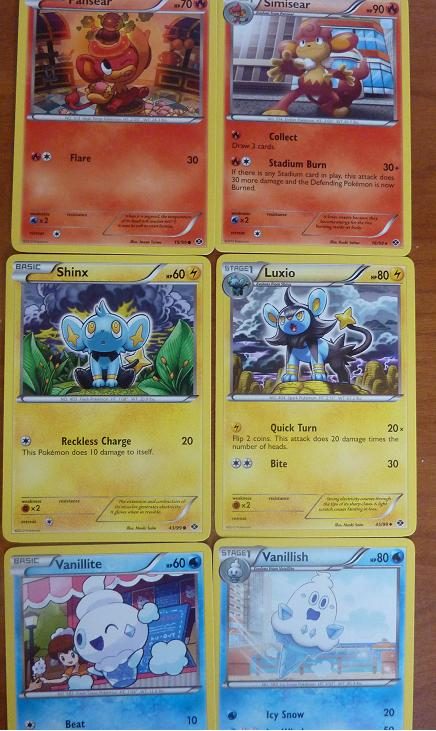 Enlighten me, people. Did I just get extremely lucky here? Out of the ten cards, six of them went together. I’d be tempted to say I got lucky, but…this kind of takes the magic away! Like, I should be eager and anxious to search for the evolution of…Vanillite…a…Pokémon ice cream cone…right…but hey, no worries! I already found its double-scooped big brother, Vanillish. Same with Shinx and Luxio, and Pansear and Simisear.

Also, the way I remember Pokémon cards is as follows: you were guaranteed ONE rare card per pack. Now whether or not it would be a holo was based on luck, and ONLY the rares could be holos. After all, that’s part of what made them rare – only one card per pack had the potential to be all shiny and shit. And when it was shiny then HOLY HELL IT JUST BECAME EVEN MORE RARE. 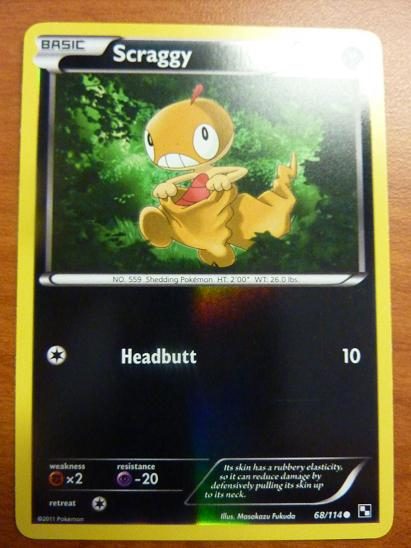 IT’S A COMMON CARD THAT IS A HOLO. Is that even a real thing that can happen? And what’s even weirder is that there are now reverse holos – this Scraggy card is an example of that. It’s hard to see, but while the photo itself isn’t holo, but the rest of the card is. So I technically could find another Scraggy that isn’t a reverse holo in my next pack of cards; he could either be a “regular” holo or a plain ol’ common card sans any shiny shit.

Do you, good ma’ams and sirs, know how head-desk worthy it is when a buddy next to you opens his pack of Pokemon cards and finds TWO rare holos and all you find is a common holo of a card you already have AND a rare, holo trainer? Oh, yeah, the trainers can be holo now. It’s obviously a ploy to get people buying more booster packs. “OH! I need to find the reverse holo common card of ButtsexMon! And then I need to find the non-holo card, too!” ::BUYBUYBUY::

Ahem. I understand this post is coming across as a bitchfest, but I guess I’m trying to become accustomed to the way kids nowadays are experiencing Pokémon cards. I shall adapt, for I am in love with the idea of collecting Pokémon cards again.

Are you still collecting Pokemon cards? How long has this ishnit been going on? AND WHAT HAPPENED TO ENERGY CARDS?!