I <3 Zombies. Games, books, movies everything. I have no clue where this came from as my first zombie experience was not a good one and I had nightmares for WEEKS.

I was in fourth grade when a game Resident Evil 2 came out for PSX. You may have heard of it ;).  Anywho, my buddy decided it would be a *wonderful* idea if we went to the store up the road and rented it. Those were the days, when a couple of 10 year olds could rent an M rated game.

In case you?re not familiar a few years back our Washington governor instated a law saying that if any video game was rented to a minor that depicted ?harm to police officers? and that sort, or pretty much any violent game, that said company could get fined $500 dollars. It was later blocked but I think it is now illegal for any minor to purchase or rent ANY ‘M’ rated game? Maybe. The reason I think this is because a clerk at Best Buy carded me when I went to buy Bioshock a while back. Her reasoning? “Can’t sell to minors.”

Anyyyyway, I really had no idea what a zombie was or what it did, so imagine my surprise when the opening scene was over and what once used to be a cop nom-nom-nom’d on Claire and blood sprayed everywhere. That did it for me. I pussed out and shut the game off. I don?t think I played another Resident Evil game until CVX came out for PS2, and even then I had to have some sort of co-pilot by my side.

I grew a pair however and made it a goal of mine to play every Resident Evil game out there…except for the handheld versions. I get dizzy looking down for too long :(

I dig the zombie style in the Resident Evil franchise (obviously 4 and 5 don’t count) and the ‘sprinters’ from Dawn of the Dead. I’m really not feeling the thinking/talking Zack I’ve read in some books (The Rising by Brian Keene kinda bummed me out). It just takes that fear of the unknown away for me. If they can think, talk and ride freakin’ motorcycles it just feels like another thriller. Now looking at THAT style of Zombie from a thriller POV I can see it being a wonderful story. My sha-bang was that I was looking for the traditional Zombie story(dumb walking pus-bags) and I think thats why I was disappointed.

The concept of being in a deserted, run-down city or whatnot and trying to find any means to survive (either solo or with a group) while constantly attempting to evade quite possibly one of most stupid but lethal enemy out there just appeals to me. Survival horror baby!

I’ve read quite a bit of Zombie books. I gotta say my faves are:
1) The Morningstar Saga – Z.A. Recht (There are currently two installments right now, the third is on the way, or so he keeps promising :). If you haven’t read this and are into this stuff you neeeeed to check it out. Check out his website too! www.themorningstarsaga.com/home.html)
2) Monster Island-David Wellington ( There are three books in this series. I don’t want to give anything away but after the second things get kinda weird for me…)
3)Day by Day Armageddon-JL Bourne (Addicting. I couldn’t put it down)
4) Dead City- Joe McKinney (Classic!)

One of my favorite Zombie movies has to be Dawn of the Dead. Again I think it’s the whole concept of trying to hole up and survive in a mall (sounds like a game that was kinda ruined when ported to Wii…). 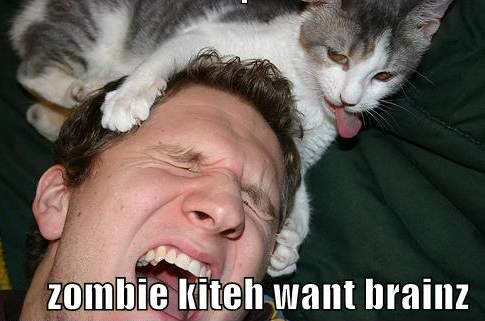 “I was in fourth grade when a game Resident Evil 2 came out for PSX.”

Okay, here’s a question: What is PSX? I know there was a PS1/PS2 console hybrid released in Japan called the PSX. Also, isn’t there an emulator called PSX? I know jack shit about emulators and that bizz, so I dunno if that last sentence even makes sense.

Whatever. I’ve come to the conclusion that PSX is a universal word for all things PlayStation 1.

Now that one of life’s little mysteries is solved….

SURPRISE! I still like zombies! A lot! In fact, I host a podcast about a zombie podcast. Actually, you know what’s trippy to think about?

I’ve read quite a bit of Zombie books. I gotta say my faves are:

3)Day by Day Armageddon-JL Bourne (Addicting. I couldn’t put it down)

I’m going to fangirl out for a moment:  I recently found out that JL Bourne listens to my podcast about a podcast! HOW CRAZY IS THAT. I practically had a mild heart attack two months ago when he tweeted me: “Thanks for the shot out and love you on We’re Not Dead—JLB.”

In other, unfortunate news, Z.A. Recht (author of the Morningstar Saga) died six months after my blog was posted. A ghost writer, recently revealed to be Thom Brannan, is finishing Z’s third novel in his honor and it is expected to release this December.

If you <3 zombies or survival horror as much as I do, make sure you give Z’s books a read. I like the Morningstar Saga for the same reasons I like We’re Alive—awesome story, interesting characters, realistic settings.