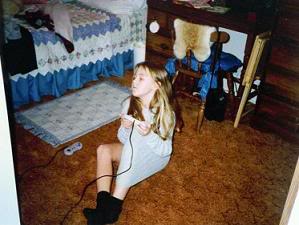 I got a good laugh today!

I’m not sure if it’s because lately video game retailers are desperate for workers and are hiring morons, or if it’s because when a chick walks in its assumed they can get away with feeding us bullshit, but DAMN today a certain retailer recently pulled a stupid. I got a good laugh out of it and thought I’d share!

I needed to kill some time after work and decided to go to a popular game retailer. I was browsing the PS3 section (YAY) and I was approached by a worker. Here is how the convo went:

Worker: Can I help you find something?

Worker: You know the new Wii Sports Resort is coming out soon?

Me: Yeah I know

Worker: Oh you do?

Me: Yeah I follow up on this kind of stuff

Worker: Well it takes place on this island. Set right in the Mii universe. They have fencing, frisbee throwing, etc?

Me: *just nods and smiles*

Worker: What kind of games are you into?

Worker: Are you interested in putting money down on anything?

Me: Not right now.

Worker: Do you have a Wii?

Worker: Do you like Halo? Do you know what Halo is?

Me: Yes I like Halo. And yes I know what it is.

Worker: What about Halo: ODST for Wii? We are taking reservations for that now.

So I start laughing, because I’m assuming he’s making a joke or something. So I made a comment something along the lines of ‘Yeah are they going to make an on-rails for that one too?!? and when I noticed he wasn’t laughing I said:

Me: ODST isn’t releasing for the Wii. Unless you know something I don’t.

Worker: No it is. For the Wii and Xbox 360. Do you want to put money down and reserve a copy?

Me: So you’re saying Bungie is developing a Halo game for Nintendo.

Me: And you’re telling me you are accepting down payments for it.

Worker: Yep. 5 bucks gets you a copy.

At this point I’m thinking I can either A) Let him off the hook and pretend I’m not interested, or B) Bust him.

Me: Can I see it in your computer?

Worker: Umm?I don’t think I can do that.

I follow him over to his computer where, you know, it stores all the upcoming games and all that jazz. And as he stand there fumbling with his computer, stammering on and on about how it was there earlier, he looks at me and says:

And with that, ladies and gentlemen, I walked out laughing my ass off.

If you guys have any stories about similar occurrences, share ’em!!