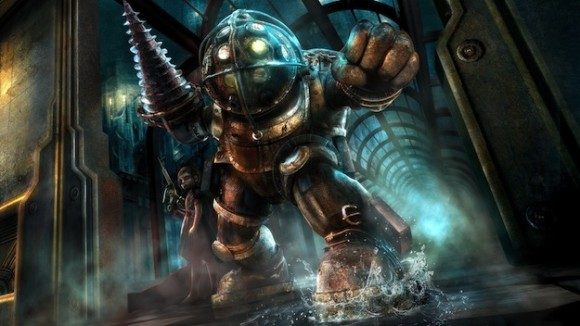 (Note: This story actually broke two days or so ago, but it’s news to me so therefore I’m going to BLAWGH about it all over your face.)

First of all, I completely forgot a Bioshock film was even in works. I mean, I’m not surprised it was — doesn’t it seem like there’s a film being made for practically every blockbuster video game out there? Let’s see… I know there was supposed to be one for Gears of War, God of War, Halo, Uncharted…and I don’t know if that World of Warcraft film is still a thing that’s happening. (I think that one is way more doable than some of the others, though!)

Back to BioShock: it sounds like the man himself, Ken Levine — creative director and co-founder of Irrational Games–  cancelled the film.

“There was a deal in place, and it was in production at Universal – Gore Verbinski was directing it,” he said during a BAFTA talk. “My theory is that Gore wanted to make a hard R film – which is like a 17/18 plus, where you can have blood and naked girls. Well, I don’t think he wanted naked girls. But he wanted a lot of blood. Then Watchmen came out, and it didn’t do well for whatever reason. The studio then got cold feet about making an R rated $200 million film, and they said what if it was a $80 million film – and Gore didn’t want to make a $80 million film.

“They brought another director in, and I didn’t really see the match there – and 2K’s one of these companies that puts a lot of creative trust in people. So they said if you want to kill it, kill it. And I killed it.”

(Fun fact: did you know that Levine used to be a screenwriter for big ol’ Hollywood?)

“It was weird, as having been a screenwriter, begging to do anything, and then killing a movie on something you’d worked on so much. It was saying I don’t need to compromise – how many times in life do you not need to compromise? It comes along so rarely, but I had the world, the world existed and I didn’t want to see it done in a way that I didn’t think was right. It may happen one day, who knows, but it’d have to be the right combination of people.”

Y’know, it’s probably for the best. As we’ve seen it’s extremely difficult to make the transition from game-to- big screen, so I’d rather have BioShock livin’ large than have its awesomeness tainted by an awful film.

RIP, brah. And should you ever resurface may you kick all sorts of ass. <3.