As more and more people are wrapping Bioshock Infinite, more and more mixed reviews are being spewed into the interwebs. Some gamers are claiming it to be highly overated, some are claiming it’s good, but not great, and others are singing its praises and vowing to mesh the 1912 era into today’s culture because, dammit, the setting in that game was just too cool.

As for me, I’m one of those people who is ALL over Bioshock Infinite’s nuts. Seriously. It’s nuts are halfway down my throat.

I enjoyed Bioshock Infinite SO hard. The highlight of the entire campaign had to have been immersing myself into that amazing environment – come to think of it, I don’t think I’ve ever been that immersed in a video game, ever. The level design was absolutely superb and I guarantee I spent more time searching every nook and cranny than I spent progressing the story.  I was simply blown away. Like, I was blown out of my door, down the stairs, into Timbuktu and into Alistair’s lap. (It was pretty awesome.) 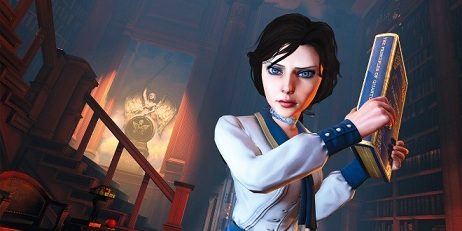 The other notable thing I took away from the entire Infinite experience was that there needs to be more AI like Elizabeth. That girl made Bioshock Infinite so much more enjoyable to play and during those brief times she wasn’t with me I sincerely missed her company. She was smart, attentive, witty and it was downright fascinating to watch her interact with the environment. I mean, sometimes she jumped off the stair railing for no reason at all but whatever — we all have our quirks. In short, when Elizabeth was around I never felt like I was playing alone and I have to give Irrational Games SERIOUS kudos for creating such an incredible character.

A part of Infinite I probably didn’t capitalize on were the vigors. After I acquired Possession, Murder of Crows and Devil’s Kiss (which are, man, the first three you get?) I barely – if at all – used any of the other vigors. People tend to favor their own vigors, I get that, and there seemed to be a vigor of choice for everyone, but I wish I had felt the necessity to use the others. Instead I simply stuck to my favorite three and plowed through the game. Granted had I felt the need to be strategic I could have utilized a variety of vigors and taken advantage of the “placeholders” (oil spills, water puddles, etc.) but the idea of having to pause the game, equip the vigor, use the vigor, pause, switch back to my favorite vigor – rinse, wash, repeat – sounded like it would be more trouble than it was worth. But hey, that’s just my opinion and I tend not to complicate things when it isn’t necessary. (AKA I don’t like to be a strategic squirrel.)

Finally, because it HAS to be brought up:

I won’t spoil it, but that’s because I only understand 36% of what in the actual fuck went down during that storyline. And that, ladies and gentlemen, is all I have to say about that.

Let me know what you think about Bioshock infinite!