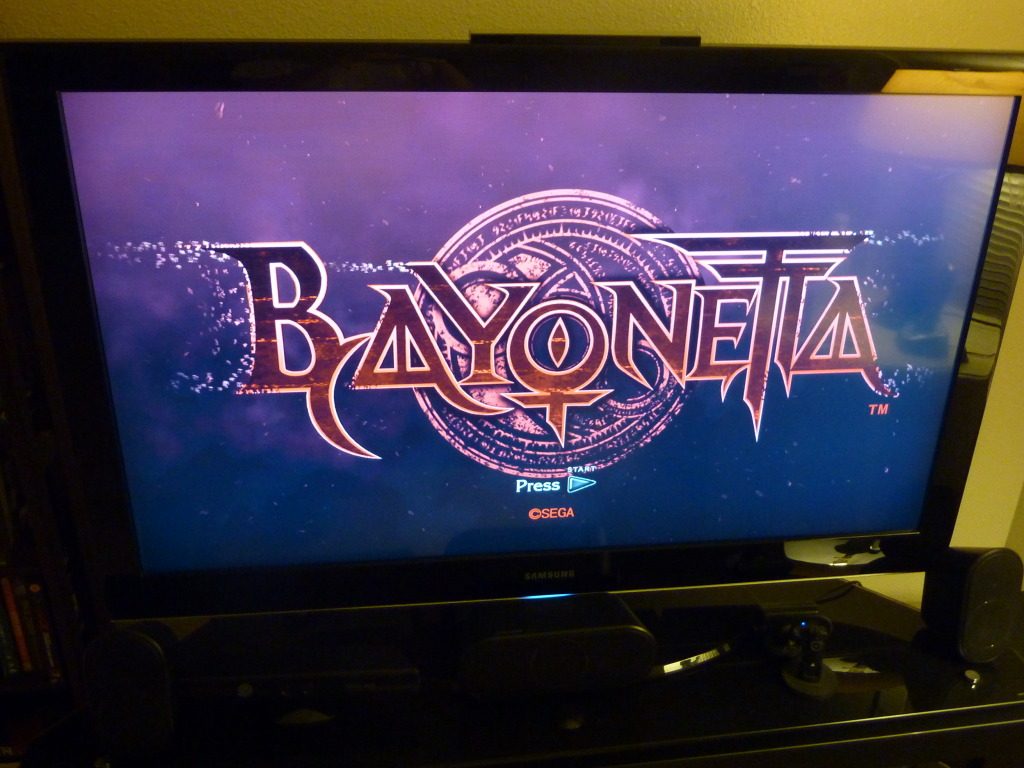 Late last night I popped the Bayonetta disc into the PS3, sat back, and….installed a firmware update that took fifteen minutes.

But once things got rollin’ I had to endure the longest introduction in my life, during which I had no idea WTF was going on. I’m still trying to make sense of what I saw. It sounds like there are two “factions”, the dark witches and the light witches (or SOMETHING) called the Umbra and the Lumen. Which is which? I’m going to assume the Lumen are the light witches because it sounds like “illuminate” and Umbra are the dark witches because the word just sounds kind of emo. Like umbrella. And people use umbrellas when it’s dark and rainy outside. So, there’s that.

Oh, you’re wondering why I can’t recall what was taught to me in the intro, it’s BECAUSE I HAD TO FIGHT DURING THE STUPID THING. So dumb. I love the story of a game, so I want to pay extra attention to the dialogue, especially during the opening cinematics. But it’s sorta kinda hard to do that when the intro requires me to listen AND fight crazy light witch people while falling from a platform into an unknown abyss at the same time. (Seriously, I was getting beat to shit because I was listening to the intro and unaware that I was supposed to be fighting.)

So next thing I know Bayonetta is dressed up in an innocent looking nun-esque outfit reading a prayer of some kind over a grave. A little fat guy with a cigar, Enzo I believe, is next to her, repeatedly saying that this “guy” she was praying for (or whatever it was she was doing) will not be saved, he was a terrible person, he deserved it, blahblahblah. Oh, and he wanted to get home so his “cute fuckers” of children could give him his birthday dinner. Or something.

These light witches appeared and Enzo is all “WTFBBQ they came for him?” and Bayonetta began floating up towards the angels. I thought she was going to, you know, join in song and dance or something when all of a sudden she fucking went apeshit and slaughtered them.

THEN, the dude from the coffin, Rodin, popped out, said ohai, gave Bayonetta guns and she blew things up—OOOOOOOH. Oh. Okay. She must have been working with Rodin to lure the witches there. That makes the most sense. Anyway, Enzo was later captured by some bird creature aaaaand then I got stuck. And by got stuck, I mean I got stuck! I couldn’t figure out how I was supposed to get to Enzo or where the hell I was supposed to go, so off the game went.

And that, ladies and gentleman, was my first experience with Bayonetta.

As for Bayonetta herself, she’s such an over-the-top character and she totally has that sexy librarian look to her. I dig it. I also love that she was given an out-of-this-world figure; she’s obviously not supposed to be the typical “girl-next-door”, so why would they design her to look like anything else? For Pete’s sake, this chick does a handstand, spreads her legs and shoots pistols out of her feet.

So as of right now, I don’t have an issue with Bayonetta. BRITT APPROVES. What Britt doesn’t approve of, however, are the effin’ loading screens. THEY SUCK. It’s like I push select and…wait for it…just a little longer…THERE’S the item screen! But that’s it. So far nothing has turned me off of Bayonetta, which means I’ll be playing again tonight!