I had been HOUNDED for years by a good friend of mine of mine to play Asheron’s Call. I mean, we would be traversing dungeons in World of Warcraft and it felt like every few minutes he’d pipe in with a, “I’m telling you, Asheron’s Call is better” quip, which would then be followed by yet another story stemming from his glory days as a monarch on Dark Tide — the game’s only PVP server — and how his main, a battle mage named El Shaddai, would reign terror against all those that would oppose him. Speaking of mages, I eventually learned to steer clear of the topic. He’s not the biggest fan of WoW’s spell-casting heroes.

“Yeah, yeah. Quit ‘yer bitching,” I thought as I would mindlessly click away. “NOTHING IS BETTER THAN WORLD OF WARCRAFT MUAHAHAHAHA!” (That may or may not have been the WoW addiction talking.)

(We later learned he should have chosen a Druid. But one would assume a mage is capable of healing and buffing…)

Oh. Are you wondering what Asheron’s Call even is? Let Wikipedia help:

Ultimately we burned out of WoW (which is part of the vicious WoW cycle — y’know, get addicted, binge-play, burn out, miss it, get addicted, binge-play, burn out…) and hadn’t touched an MMO for months, all the while I was being propositioned for some Asheron’s Call action. Finally, one day, during a moment of weakness, I succumbed to his request to play Asheron’s Call.

Guys, I have never had so much fun with an MMO in my life. 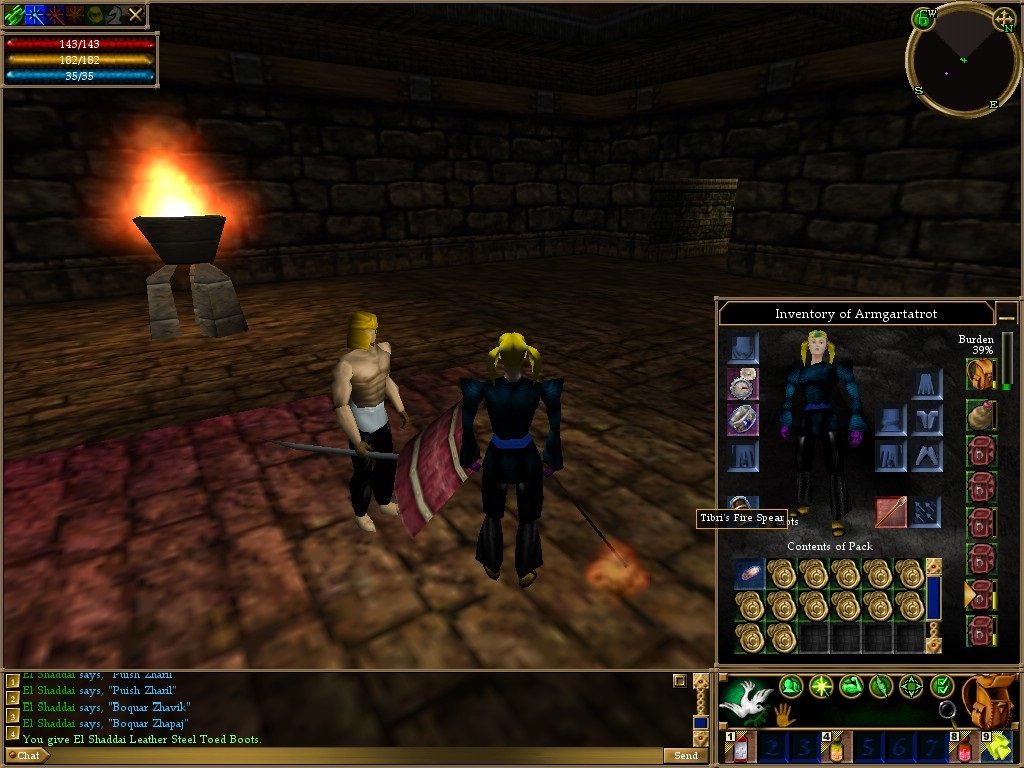 First things first, and let’s just get this out of the way — AC is NOT a pretty game at all, but if you can get past the graphics and love them for the retro awesomeness they represent, I guarantee you will have a blast with this game. GAH. I’m getting giddy just typing about it.

For starters, I now see why my friend was upset regarding the mage limitations in WoW because in Asheron’s Call you can be whatever the FUCK you want to be. Want to be specialized in sword combat and war magic? You can be. Want to be an archer who can also debuff the shit out of foes? Go for it. I won’t pretend to know all of the combinations or what they mean as I’m still new to the game, but from what I can tell anything is possible.

DON’T LET THAT “UNUSABLE SKILLS” TITLE FOOL YOU! It’s possible to learn all of those skills. I just haven’t put any earned skill points towards them because, hey, who wants to learn COOKING when one is perfectly capable of throwing a hot pocket into a microwave IRL?! Ahem. Uh, on sort of the same note, I super duper appreciate the way Asheron’s Call does character/stat leveling. You receive real-time experience from enemies you defeat, which then can immediately be used to increase your stats. And if it all looks a bit overwhelming, never fear! You can be like me and only increase certain stats. As you can tell from above, I’m building a traditional tank.

The game just has so much fucking charm. Honestly, AC kind of reminds me of playing one of those old-school dungeon crawlers on DOS. OH! And that’s just another thing I love so much about this game. The dungeons are ridiculously fun. Unlike WoW, where the dungeons in the queue are few and you find yourself visiting the same ones, the dungeons in Asheron’s Call are unique in their layout and objective.

Let’s say you stumble across a locked cell, or door. Obviously you need to find the key, so you better search the dungeon from head-to-toe. Kill every enemy you come across, because they might just be the one holding the key. And I gotta give love the real-time battle narrative.

I haven’t even scratched the surface of why I think Asheron’s Call is awesome, but if you find yourself being a curious cat you can sign up for a free trial. (At the time of this post, the site seems to be down for maintenance, but keep trying!)

I’m on the Frostfell server, so if you sign up make sure you let me know! :D