First of all, look how far I am! I am so CLOSE to finally finishing Arkham City. 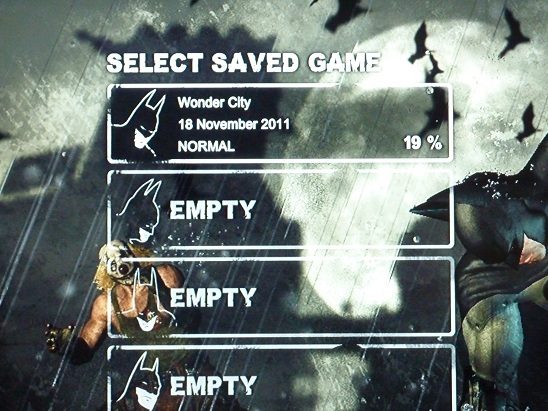 …shut up. In my defense, that was before my session last Wednesday. I’m probably at, like, 23% right now.

So Bats wandered into the Ninjas’ hideout and promptly collapsed on the ground. As if that weren’t lovely enough, he than began to hallucinate and see his parental units calling out to him in a majestic beam of white light. Psh. What crappy parents. Why would they want their son to, uh, die? If he dies, Gotham dies. True story. 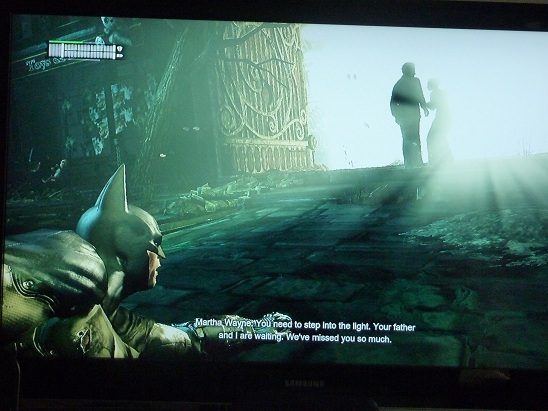 Thankfully Oracle snapped him out of it and politely told him, that according to the batsuit readings, he had only a few minutes to live. Yeah, thanks Oracle. She offered to contact Robin and have him assist, but Batman pretty much said “HELL NAW” to that idea. Oh, Batman. Why must you try to convince the world that your veins run with the fluids of  stud muffinry? I mean, come on dude, we already know it exists. Also, what happened to the ambiguous duo of Batman and Robin? I thought the two were BFFs. I’m sure it’s in some Batman lore that he and the original Robin had a terrible breakup and Batman forever holds a grudge against the “new” Robin, but still. Lame. 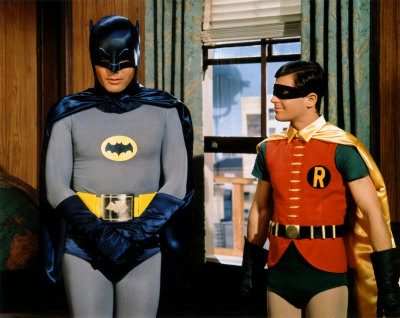 Batman finally tracked the assassin (or ninja, or whatever the hell she is. A ninja assassin?) and that bitch lead him straight to Talia. And let me just say Talia has my full approval. (I knew I loved her when she said “After that night in Metropolis, you could have just called [instead of tracking me down.]) Anyway, Batman told Talia that he had a change of heart; that he wanted to take his place at her side as an Assassin because, hey, he was pretty much dying and he didn’t have another choice. 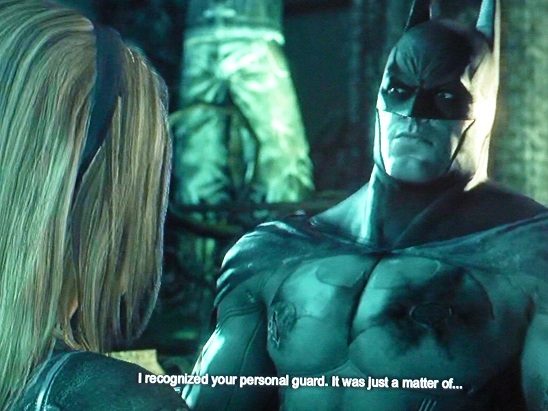 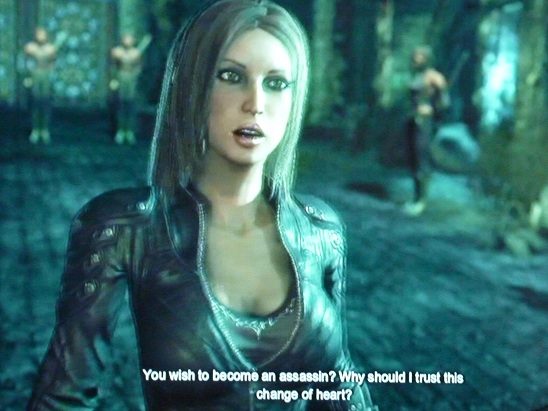 Now I got a little confused here. Batman always has a second agenda, and I, as the player never know what it is. SO. Batman told Talia he wanted to take his place next to her as an Assassin (which I’m guessing was Ras’ plan all along) but in reality he just wanted to get close to Ras in order to get a sample of his blood. Got it. However, in order to take over Ras’ place one is required to pass through a really weird, trippy test and ultimately kill him. Hell, even Talia was telling Batman to kill her father. But, like, Batman doesn’t kill. 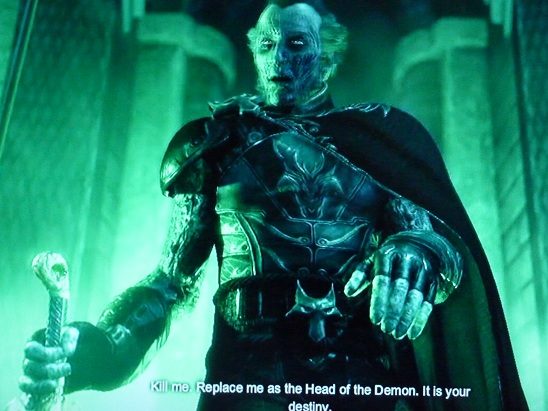 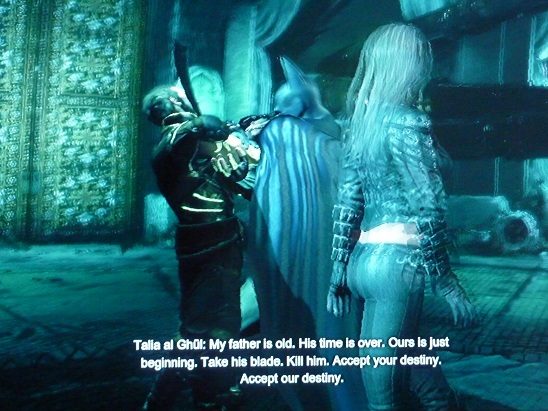 Somehow I managed to NOT kill Ras and successfully extracted a syringe of his blood. Batman then lectured Ras about the Lazarus Pit and how it has corrupted his mind. Well, no shit. That Ras dude is a freakin’ psycho. Speaking of the Lazarus Pit…what the heck is it? According to Batman, “Small doses appear to heal most ailments, but even the small amount I ingested had a few nasty side effects.” So…is that the stuff he drank before starting the trial with Ras? Man, this game gets weirder and weirder…in a fan-fucking-tastic way.

As I began to leave the hideout (sans Talia, she was effin’ PISSED that she was lied to) Robin called and gave me the low-down on the confirmed cases of illness at Gotham General; there are 30 confirmed cases, almost 50 at Mercy, and Robin believes there could be up to 200 by tomorrow morning, soon followed by fatalities.

The next main thing on the agenda was to visit Freeze and give him the blood sample. But first I had to stop by and see my “buddy” Bane, as I had destroyed my half of the TITAN containers. Now, I never trusted Bane, but when I arrived a bunch of TYGER folks arrived as well. Bane and I teamed up to knock ’em down (although Bane clobbered me on several occasions and only muttered a “Sorry Batman” after I received a punch my face). After TYGER was taken care of…that mudda’fucka turned on me, JUST LIKE I KNEW HE WOULD.

But like I said above, Batman always has a hidden agenda, and I guess the entire time Batman was using Bane; Bane rounded up the other TITAN containers for easy demolition by Batman. 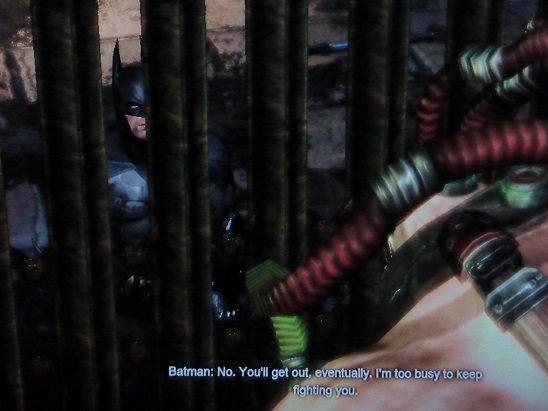 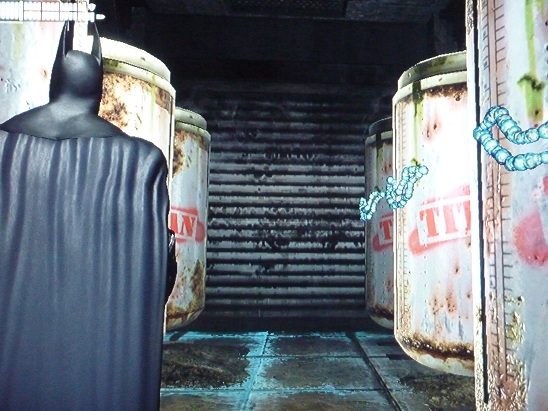 And that was that.

When I thought I was finally on my way to Freeze, there was that thing with Mayor Quincy Sharp. According to him, Strange’s men approached him back at the Asylum and told him if he turned a “blind eye” to certain things, they could make ish-nit happen for Sharp– liiike guarantee him mayor-ship All Sharp had to do was set up Arkham City and place Strange in charge. But now Strange is placing everyone with evidence against him in Arkham City, which is exactly why Sharp is there. So now I need to find out who Strange is working with.

I finally made it to Freeze, where we uh fought? Um? One second we were all “OHAI here’s the blood you need.” and the next was “I’M GOING TO KILL YOU BATMAN WITH MY HEAT SEEKING MISSLES AND YOU MUST FIND A DIFFERENT WAY TO HURT ME EVERY TIME MUAHAHAHA.” But finally it changed to “I promise you, Victor, I will find Nora.”

I swear, Batman has crazier relationship with the baddies than the kids do on the Jersey Shore. 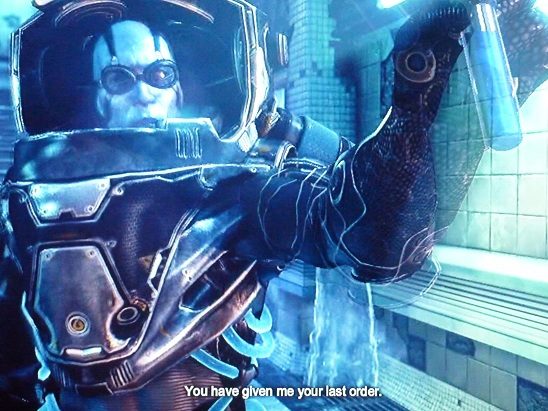 Yeah, we’ll see about that.

SCV2WCUVKFKD (<–this code is for something, so please ignore it for the time being ;D)