Ah, zombies. I love the fuckers, but when it comes to dreaming about them that’s a whole ‘nother story. I never know what I’m going to get. The dream can be fun (almost humorous), or it could be downright terrifying (piddle-inducing). Unfortunately I had a piddle-inducing, freak-ay zombie adventure in dreamland last night.

In a nice change of pace, I had already taken refuge in my parents’ house when this dream started. My mom was at work, but my dad was home as well as their kitteh <3. At that moment I felt a sense of security; my parents live on two acres out in the middle of bumfuck nowhere, after all.

But there was a pit in my stomach because I knew my mom was at work and we hadn’t heard from her. That sense of dread alone is enough to make any dream unenjoyable, nahm’sayin? Anyway, I found myself calming my nerves by sitting in my old room and petting the cat. He was sleeping peacefully, and I should have just let him sleep…but no. I had to pet him until he woke up. No biggie, but as soon as he wakes up he *always* wants to go outside. Woops.

Sure as heck, he started heading towards the front door. MUAHAHA…sorry, Kitteh, but that front door is shut and it’s staying shut. We’re in the middle of a FREAKIN ZOMBIE APOCOLPYSE. You’re not going outside anytime soon — oh, you’re going to use this brand new attic-esque ramp that leads outside. Where did that come from? Oh. It was built to just to inconvenience my dream. Lovely.

Within a matter of seconds I spot the cat dilly dallying outside. Earlier there hadn’t been any zombies lurking about, so I figured I’d have enough time to dash outside, nab him and lock him in the bathroom (or something). While the thought of going outside and possibly being spotted by a zombie was absolutely terrifying, one does what one must to save their kitty. But as I took another look through a window I noticed a whole mutha’fuckin WAVE of those pusbags were making their way through my parents’ front yard and slowly trickling out of the woods. The cat was nowhere in sight.

Suddenly I hear this frantic meowing coming from the front door. Now, as every zombie guru (and I guess anyone with reasonable IQ) will tell you, there are always consequences for your actions. If I were to open the door for my cat (and save his life) this could be VERY BAD mmmkay as it would alert the zombies that my dad and I were inside. However, if I ignored my cat I’d have to live with my douchebag self.  And before you say “HURRR it’s just a cat DURRR” did I ever tell you about the time I ran outside at 2 am in nothing but a t-shirt while carrying a baseball bat because I thought I heard my cat fighting with a raccoon? No? Okay. Now you know.

I dashed to the door and opened it ever so slightly, and the cat darted in. But as I suspected, he wasn’t alone. There were about fifteen moaning, groaning zombies crowded around the doorway, reaching inside, grasping at whatever they could and the bastards ultimately made shutting the door impossible.

It was around this time my dad decided to make an appearance (OHAI dad!) and together we managed to slam the door shut. But all was not well. Our position was known. Every inch of the house was surrounded by zombies; they were pounding on the walls, they were slapping the windows. The door we had managed to shut was now about to buckle. I didn’t know where my mom is.  What does one do?

You realize it’s a dream, neenerhead! Yup, amongst all of the chaos I understood that all of this was fake.

And let me tell you, as soon as I came to that lil’ realization I did everything in my power to wake myself up. I ran to the middle of the living room and started slapping my head and pulling my hair all while shouting, “THIS IS A DREAM! How do you wake yourself up from a dream?!” Now, what I SHOULD have done was dreamt up an army of Grey Wardens to slaughter the zombies. That would have been epic. But no, I continued acting like a freak and carried on with hair pulling and face smacking.

Incredibly, it worked. However you can imagine my confusion as I woke up in my bed with my hands all wrapped up and entangled in my hair.

Just a typical night for Britt. ;) 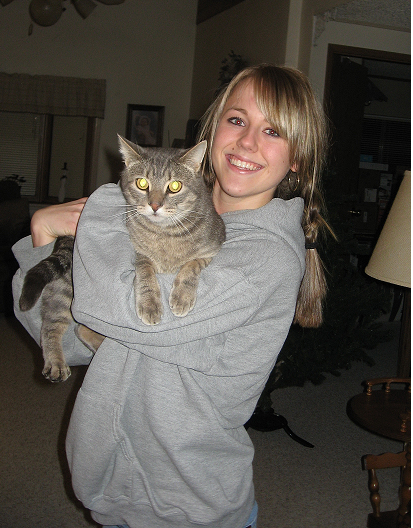 I’m so growing up and becoming a cat lady, aren’t I? …dammit.