I friggen’ love holidays. You see, it’s currently Monday afternoon— but instead of sitting in a stupid cubicle doing stupid pencil pushing I am lounging around in sweats and an oversized sweatshirt (I know, I know. That mental image is stimulating).

IT FEELS AMAZING.  It’s also snowing outside. And here’s a fun fact: whenever it snows I think of Snowhead.

Then my mind races with thoughts of Majora’s Mask , and then I somehow always remember this:

Okay, I’m going to *try* to stay relevant in this post. And by relevant I mean I’m going to post photos of nerd-related things I came across during my weekend adventures.

Saturday morning I was running some errands with my mom when my eyes spotted something full of 100%  win-juice. CAN YOU SPOT IT?

Okay, if you haven’t played Half-Life I’ll cut you some slack. What Would Gordon Freeman Do? Cue the crowbar. This woman also had a gaggle of game character figures glued on their dashboard. Brilliant. I really wanted to roll down my window and scream awesome obscenities, but it was cold outside and the wind chill from going 40 mph would have destroyed me.

My vag-partner-in-crime Erin (I’m sure she’s gonna love that nickname) came over later that evening for some female bonding. Together, we explored the manipulating properties of my webcam. Apparently I pulled of the Princess Zelda look from Ocarina of Time and she Princess Peach. 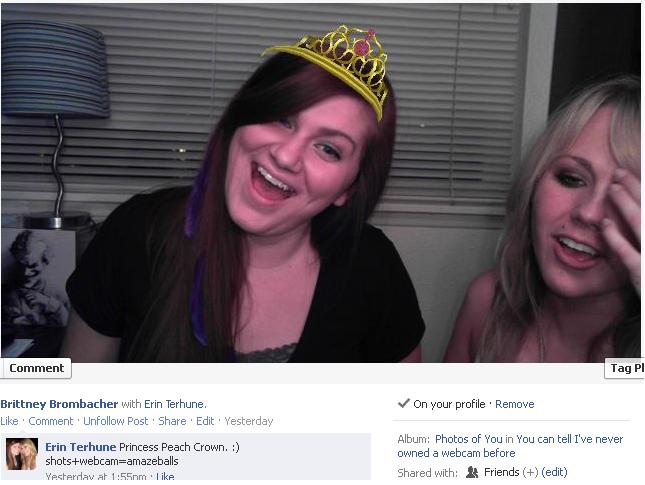 After convincing ourselves we took enough redonkulous photos we hit up this country western bar downtown. I swear everyone there was related to John Marston. Erin, being the awesome chick that she is, is very familiar with Mr. Marston so both swooned over his distant cousins. Also, a heads-up cowboys: you do not need to smell like a pack of cigarettes to be legit.

A few hours later we left the bar to find that downtown had been BLANKETED in snow. And, you guessed it, the sight of the snow triggered thoughts of  Snowhead, which made me think of Zelda, which reminded me I had a Twilight Princess wallet.  So, I did what any normal Zelda fan would do: I represented.

Too bad no one was outside to, you know, appreciate the representation.

Well kiddos, I’m going to cut this post off so I can continue being a lazy bastard (in my oh-so-sexy sweats and oversized sweatshirt) and I hope you have the oppurtunity to do the same! I’ve really been pushing myself lately, and I don’t think I realized how much I needed a break! :)