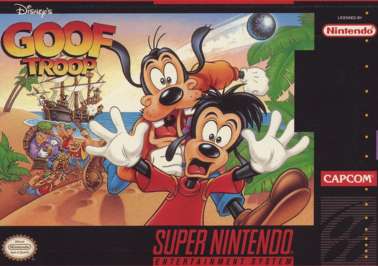 Good ol’ dad came over last week to bullshit, so we bullshitted over what fathers and daughters bullshit over best:

This game…oh man, this game. I can’t even recall how many times pops and I would sit and play this for hours on end. We tried to play as many co-op games as we could (Bomberman, The Great Circus Mystery Starring Minnie and Mickey, Kirby Super Star, Mario, Donkey Kong…I’M GOING TO CRY FROM NOSTALGIA) but something about Goof Troop was extra special. The game is extremely puzzle oriented, and looking back on it now I really appreciate that my dad would patiently work with me to solve some of those crazy-ass puzzles. There’s something “DAWWW” worthy about a father cooperating with his six-year-old daughter in a top-down co-op SNES puzzle game, after all!

We had SO much fun with Goof Trop. Anyone who has played this bad boy is very familiar with the tossable objects throughout the game. Well, being the young, mature six-year-old that I was I found it highly entertaining to throw these objects at my dear father at the most inconvenient times. Eventually he caught onto my little game (using the “OH, sorry dad I didn’t mean to!” excuse didn’t work for very long) and he also began throwing vases and other paraphernalia at yours truly. Bully.

It’s slightly annoying because once you’re hit with an item you lose control over your character for a few seconds, allowing enemies to, you know, take away that health you’ve worked so hard to accrue. And if someone dies, that only leaves you on the map, thus your chances of dying are heavily elevated AND when you DO die it’s irritating. So my dad and I learned to wait until we wiped out all enemies before breaking into an epic throwing battle. It all boils down to how quickly you can press B, as that’s the throw/catch button. ;D 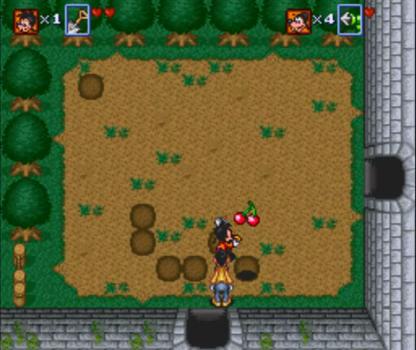 There are several areas in the game where you can dig for goodies — and by goodies, I mean health-replenishing bananas, cherries and diamonds. My dad and I would take turns digging up an entire field and debating who got the better haul. Of course I would always win. (Thanks to being daddy’s little girl, that is, but I have to admit that he somehow always seemed to get the better loot…)

For being such a simple game, Goof Troop not only provided endless amounts of entertainment, but precious memories for my dad and I. So much so that we couldn’t stop talking about how much fun we used to have. Hmmm…he’d be embarrassed if he knew I told ya’ll this, but whatever — later my mom came over as well, and while she and I were talking in another room my dad wouldn’t stop whining.

“BRITT! Come back and play Goof Troop with me!”