Before last Tuesday I hadn’t had the chance to play Splatoon at prior game conventions. Appointments were booked up, schedules too hectic, lines too long…y’know how it goes. So when Nintendo reached out last week and was like, “OHAI! Come play Splatoon with us on Tuesday!” (paraphrasing, of course) I thought, “Eh, I have nothing better going on so I may as well…”

KIDDING I PRATICALLY SHOWED UP TO THEIR HQ A WEEK EARLY. I was stoked.

(Random, but I visited Nintendo on the day the news broke about their next platform, NX, and about them joining the mobile sphere. While we were waiting for the event to start, Reggie walked into the room and was like, “Thank you for joining us on such an uneventful morning for Nintendo…” And I lol’d. But there were a lot of people who must’ve missed the “BREAKING NEWS!” memo as there were several confused looks. Anyway, now that I’ve totally derailed…)

If you don’t know much about Splatoon, here’s a quick rundown: You play as an Inkling. To be honest I’m not sure what an Inkling actually is, except in its human-esque form it looks, well, kind of human. While in “human” form, Inklings wield different weapons that go about spraying and spreading paint in different ways. But here’s the thang: Inklings can transform into squids. While in squid form, the Inklings can quickly traverse via paint (which can be strategically used for an offensive/defensive advantage) and they can maneuver through obstacles they otherwise couldn’t in their human…esque…form, such as grates.

Here’s a breakdown of how the event went: I paired up with someone and together we shared a demo station. (Turns out we’ve interacted on Twitter before! Small world!) The first portion of the event was dedicated to the single-player campaign. (We switched off who played.) Next was hands-on time with the well-known multiplayer mode Turf War, and later a new multiplayer mode called Splat Zones. Again, we handed off the Wii U’s gamepad after each match.

What sets Splatoon apart from everything else I’ve played is the creative usage of paint, but the fun doesn’t stop there. Oh no, friends. Splatoon offers a nice array of different weapons that allows you to EJECT said paint. Not only are weapons used to take down your enemies, they’re also used to spread paint wherever you please, which, like I said earlier, is beneficial for quick maneuvering and offense/defensive tactics. (How does one spread paint? Why, instead of shooting your enemies you just shoot the ground! SO EASY TO UNDERSTAND EVEN I UNDERSTAND IT.) While at the event I’m pretty sure I tried out roughly eight or so different weapons, but I had a pretty distinct favorite…the Splat Roller. Mmmm. But first, meet the Splattershot:

I personally suck at precision aiming (the motto I live by is “Spray and pray”) so the best ranged weapon for me was the Splattershot, an automatic weapon which only requires players to press the trigger button and aim. That said, I was the biggest fan of the Splat Roller, a large, two-handed weapon that resembles a paint roller.

The Splat Roller is rad because it covers a TON of ground very quickly AND you can run over your opponents (which is so extremely satisfying) but, if running over people isn’t your thing, you can also fling paint for a close-range attack. Beware, though…if you’re being shot at from any considerable distance while wielding the Splat Roller, your only chance of survival is to duck into the paint and GTFO, as you ain’t got no range with this baby. 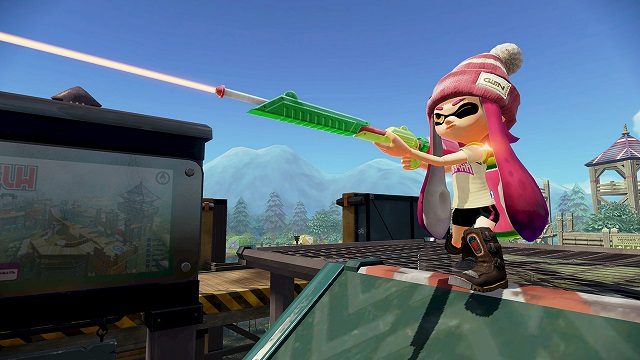 This is the Splat Charger. This weapon would be best suited for those who enjoy sniping, as it requires careful timing and precision. (Y’know, hold down the trigger button to charge up a round, aim carefully, release, snipe, kill, etc.) Needless to say I “noped” the hell away from that one, so I don’t have much to say about it. My partner seemed to handle it well, though. Show off.

Weapons also come with an additional “special” weapon. To be completely transparent with you I never *quite* got the hang of the special weapon because I turn into Panicky McGee when I play ANY form of shooters and cannot follow simple on-screen instructions, but in short characters have a “special meter” in the right corner of the screen. When this meter is full, all you (apparently) need to do is press the right stick to use it. For example, the Splat Roller’s special weapon is a badass attack called the Killer Wail, which is a thing that kinda resembles a humongous megaphone that not only sprays a metric buttload of paint everywhere, but annihilates your enemies as well. It’s beyond beneficial in the multiplayer modes.

Speaking of, most of you likely know of Splatoon’s multiplayer Turf War mode, which is being called the “bread and butter” of the game. In Turf War you and your team of four go against another team of four, and, well, try to claim as much turf as possible.

“But Britt, how does one claim turf?”

Well by golly, I’m glad you asked! You claim turf by painting as much of the arena with your team’s color as you can. But it ain’t so easy. The opposing team will be claiming turf while you are, and you can paint over each other’s paint. It’s a constant battle for turf…THUS THE NAME TURF WAR. /mindblown

During the match you can glance down at your gamepad to get a rough visual of what team is winning the match, where you should head to gain more turf, where your teammates are, etc. Of course, destroying your enemies while claiming turf is advised. At the end of each match, a giant, fat cat named Jud will declare the winner. This was basically my favorite part of Splatoon because CATS.

I like Turf War because, and this goes for both multplayer modes, while it’s highly competitive and while I still turned into Panicky Mcgee, I never felt any of the angst I typically do from online shooters. Instead of feeling like I was going to get cursed out for a bad match, or like I was going to be taunted by another player, I was able to chillax and enjoy the match, and because of the prevalent Nintendo charm I could never end a match irritated, stressed out or angry.

It also helped knowing all of us were evenly matched. I mean, of course certain weapons fare better against others and vice versa, but it wasn’t like I was facing off against players who had spent hours customizing their loadout, y’know? With that said, players CAN customize their appearance with certain garb which will give certain buffs, but we weren’t able to dink around with that. There’s also character leveling in the game, but Nintendo wouldn’t provide any details on what that entails. But it was hinted to me that the buffs won’t provide a significant enough boost to make certain characters untouchable, and for the most part players would always be pretty evenly matched. Thumbs-up from me.

The second multiplayer mode we played was called Splat Zones, a King of the Hill-esque mode that was hectic AF, but boy it was fun. Two teams of four go at it to “claim” a marked rectangular space by filling it with as much of their paint as possible. Once a team has claimed the area, that team’s timer slowly starts ticking down from 100. The first team’s timer to reach 0 wins the match.

Of course, as with Turf War, it ain’t that simple. An area that has been claimed for Team A can just as quickly be reclaimed for Team B.  Not only that, but team penalties incur whiiich adds time to your timer. No Bueno. 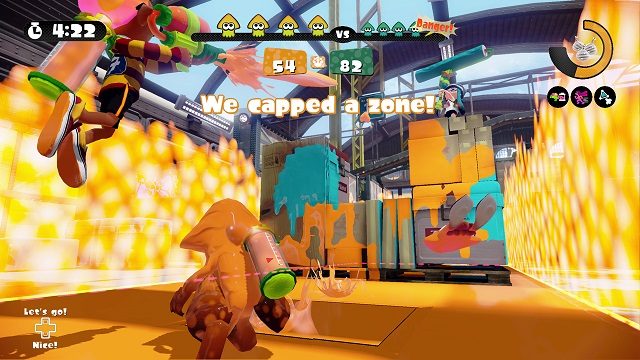 This mode was CRAAAAZY. Unlike Turf War, I couldn’t run off and stick to myself (AKA Splatoon-Camp) without looking like a P.O.S. and was forced to jump into the fray. I mean, everyone was shooting everywhere, claiming territory, croaking left and right, respawning, jumping right back into the fray, losing territory, croaking, reclaiming territory, respawning…it was hectic madness in a wonderful way. To be successful at this mode you and your team either needs to be extremely lucky or have SOME sort of unspoken gameplan. (I say unspoken because online voice chat in Splatoon isn’t a thing.)

Shall we move on from multiplier and onto some single-player Splatoony goodness? 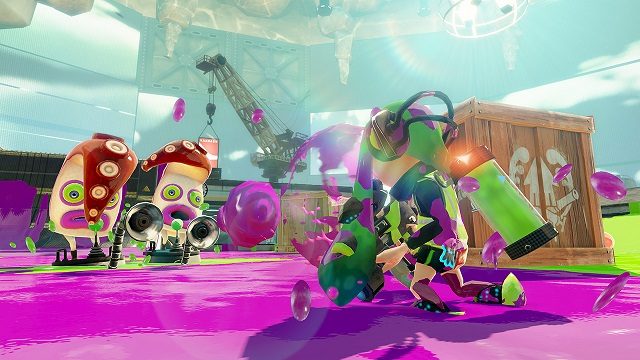 Before Splatoon’s single player campaign was announced, most thought Splatoon would be nothing more than a multiplayer brouhaha, and honestly, that’s what originally turned me off. But thankfully the Nintendo Direct Gods swooped in four or so months ago and were like, “AYE we have a single-player mode!” with the reveal trailer below:

Guys, single-player Splatoon is a BLAST. It reminded me of a 3D Super Mario title, with the enemies, obstacles, platforming, all that charm…umf. Once I became comfortable with the controls I was having a swell time cruising through the level, spraying paint, squidifying myself, trekking through the paint, jumping over ledges, swimming up walls, and taking out enemies. 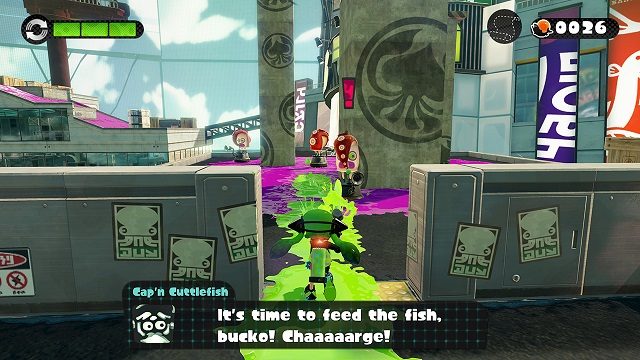 From what I gathered, Splatoon’s level design is pretty sectional. Begin a level, hop on this platform, shoot up onto the next, jump onto the platform across from you, etc. (It’s very vertical and death by falling WILL happen a lot.) With that said, each platform is like a level in itself, and I noticed that my demo buddy and I played these differently. I would play more defensively, while my partner would use the level to his advantage and play offensively. For example, I might use a spewing paint geyser as cover from incoming fire, but he’d climb it (via squidification), perch on top and then use the vantage point to take out enemies.

The levels are fun to maneuver because you have this great paint feature at your disposal. I learned the best way to guarantee success is to spray yo’ stuff EVERYWHERE to ensure there’s always a means for a quick squid-escape should you need it. Of course, this plan was foiled on numerous occasions, when enemies would paint over my paint, or when these annoying, indestructible, little brush-like enemies would erase what paint I had laid down. Jerks.

Although entertaining, I was able to breeze through the levels without much trouble. It’s important to remember I was playing the beginner levels, but yeah, I’m keeping my fingers crossed for some tougher stuff up ahead. 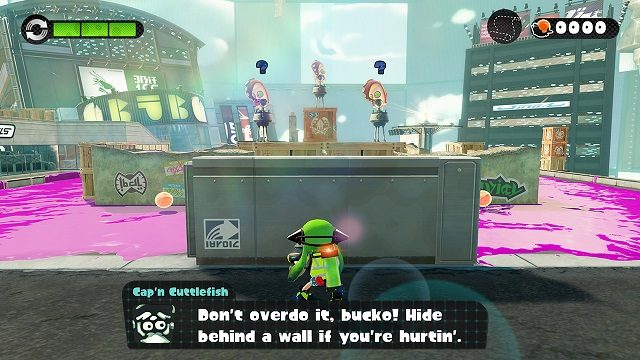 If you enjoy 3D platforming I really, really think you’re going to enjoy Splatoon’s single-player campaign. It’s charming as hell, and the paint mechanic throws in a much-appreciated twist into the whole thing. The multiplayer is really where Splatoon shines, though. The entire room (which consisted of nothing but stuffy media folk)(I KID) was whooping, hollering, high-fiving, throwing their arms in the air…(Okay, maybe that “arm” bit was was just me.) But seriously, we were getting INTO it, but in a fun, lighthearted way. (It’s that Nintendo charm, I tell ya.)

I think Nintendo truly has something special with Splatoon, and it’s wonderful to see them dabble into a corner of the industry we have yet to see them step foot in. I just hope they can grow, mold and maintain an online audience and build serious traction for the game. Too many people are going to write off Splatoon as a “kiddy” shooter and as something not “hardcore” enough for them. If you’re one of ‘dem people, I ain’t judging, I’m just urging you to give Splatoon a shot. (PUN SO INTENDED.)

…I want to see Splatoon at MLG tournaments.

Splatoon launches this May.