Ahhhh. Another PAX has come and gone.

And as I sit here and type this epic blog post* I feel like a braindead zombie; a zombie that cannot think clearly nor talk coherently as this zombie has been on the go since Thursday; a zombie whose only opportunity to sit on her ass for an extended period of time will come Monday morning. At work.

*I cannot confirm nor deny this will be an epic blog post, for I haven’t finished it as of the time of this writing.

Now, PAX and I have a strange relationship–and I’ve talked to Beez about this––it seems like the more PAX conventions I attend, the less games I play at them. I tend to find myself wandering the show floor, meeting up with friends and searching for amazing buffalo wings.  But this time around, PAX and I took our relationship to the extreme; I didn’t play ONE game at PAX Prime. NOT. ONE. Like, I can’t tell you how amazing Skyrim was. Or how hot Garrus looked in Mass Effect 3 (interspecies sex FTW!). But you know what? I don’t regret the lack of button mashing. After all, the lines were absolutely ridiculous. Three hours to play Skyrim? No thank you kind sir. I’ll stand from afar and watch the demo half a dozen times and call it good.

I mean, I heart video games as much as the next gamer, but if I were to stand in line for three hours…sheeeyt, that’s three hours I could have spent meeting new people. And for me—and I know I sound like a broken record—meeting fellow gamers is the best part about PAX. (The people watching is pretty amazing, too.) But if you think all I did was walk around and gawk at the pretty lights and game displays, you are… mostly correct. HA. Like I said above, I did a lot of wandering with Beez. But some pretty awesome stuff happened on the show floor. 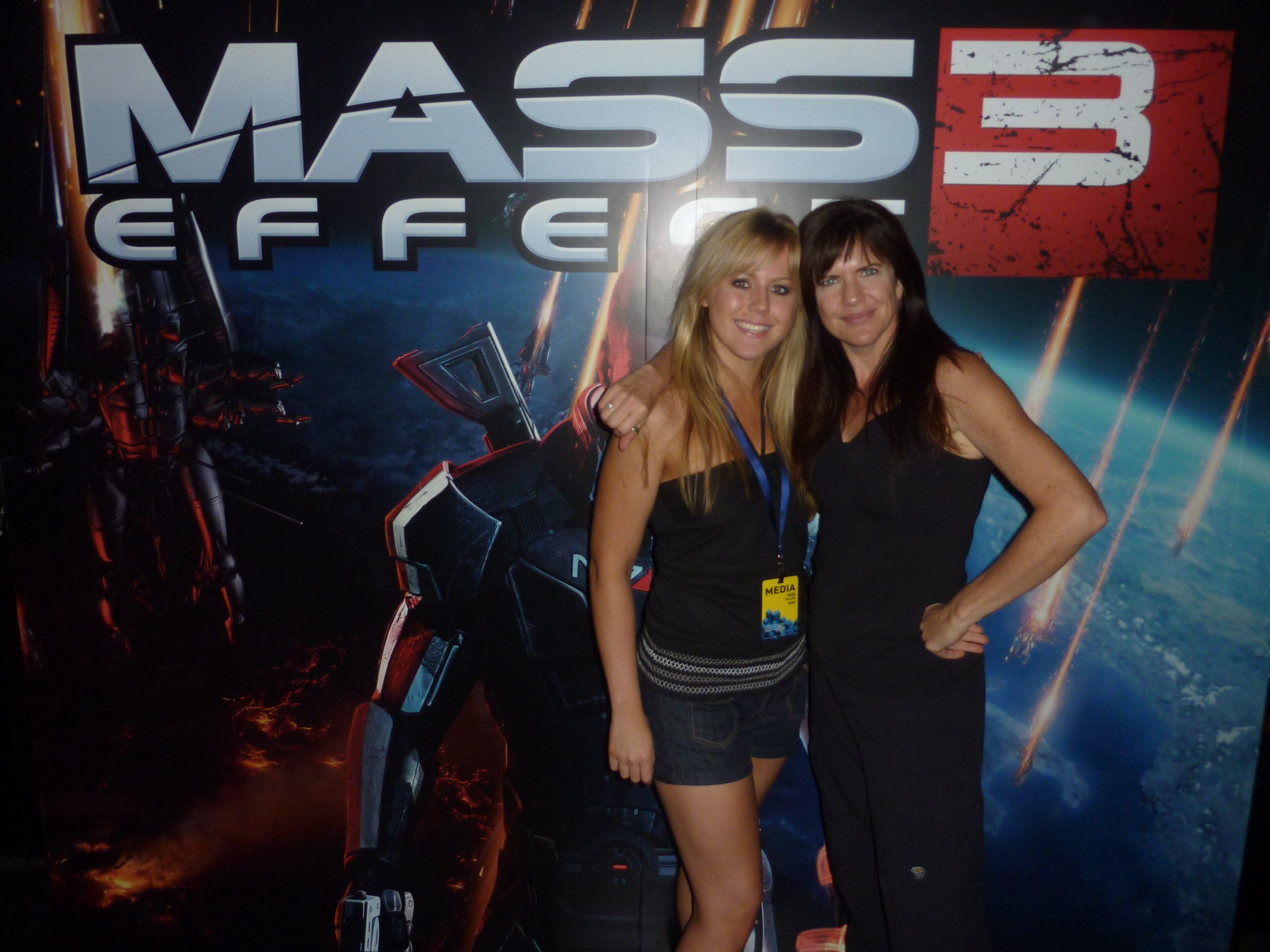 Okay, this is Jennifer Hale. She is my hero, and if you find yourself scratching your head then you clearly aren’t worthy of being on this website. I KID. Come back. Thanks. Anyway, she’s VERY well known for being an amazing video game voice actress. Like, uh  she’s the voice FemShep. Yeah. You may also know her as Naomi Hunter from the MGS games. She was simply lovely to meet. In Britt terms — “I want her babies.” 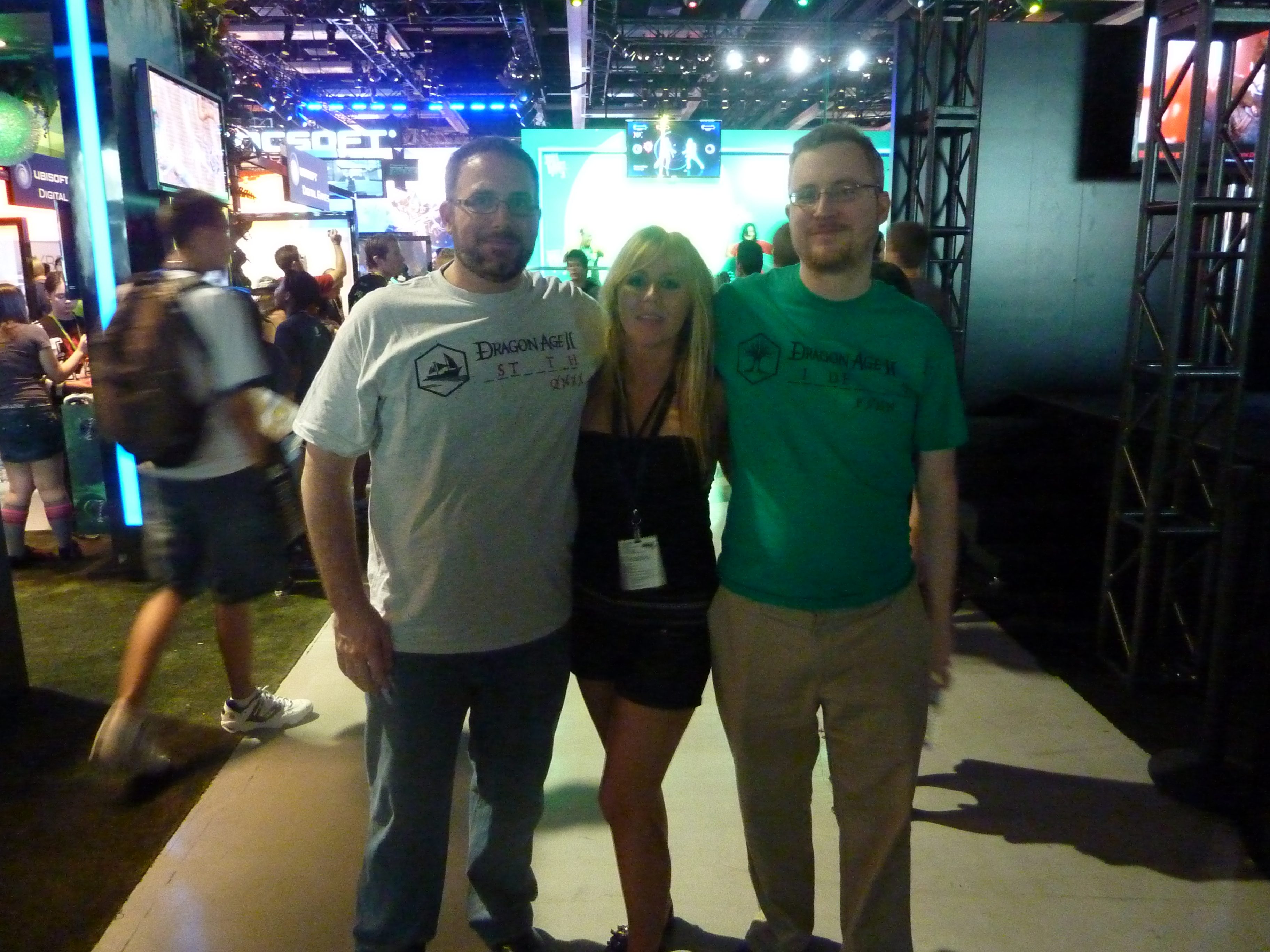 Ugh. I’m going to kill Beez for taking a picture of my derp face. Anyway, despite the unattractiveness of my expression, these are two big wigs that worked on Dragon Age. Dude on the left is Mike Laidlaw, Dragon Age LEAD FUCKIN’ DESIGNER. The guy to the right…I can’t remember who he is. But I’m sure he does awesome and important things.

How this picture came to be is by Beez and I aimlessly walking around (like a boss) when we came across the Bioware booth. Mike Laidlaw and aforementioned anonymous do-er of awesome, important things were discussing Dragon Age 2 and taking fan questions from Twitter. I SQUEE’D so hard, and needless to say, I just stood there with my mouth agape for a loooong while. After they finished talking about the awesomesauceality that is Dragon Age, I stalked them and demanded a photo. Beez told them to kiss me but they didn’t. WHATEVER BIOWARE. 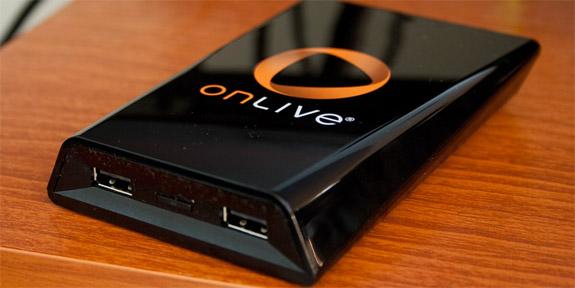 Beez and I also scored a free OnLive console, or a “MicroConsole TV Adapater“ if you want to get fancy. All we had to do was stand in a line for about 30 minutes (that was moderated by nazi Enforcers, I might add), give our name and email address and VOILA! 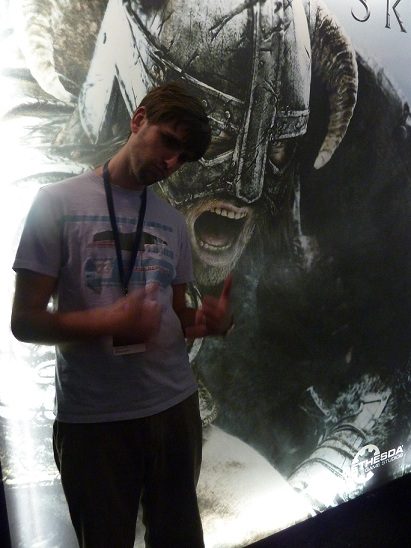 Dear: Skyrim. I really, REALLY wanted one of the epic beanies that were being handed out for playing you. I waited in line for over 30 minutes. In fact, you were the only game I waited in line for. But one of your employees approached me and said I wouldn’t get the chance to play with you, so I bailed, and I never found a Skyrim beanie. I am forever a sad panda over this.

That being said, I guess one could say I at least put forth an effort to play a game. That has to count as something, right?

…OH! Oh snap. I forgot that I played about 15 seconds of Ocarina of Time 3D. But then I realized I was in the Water Temple, so I quickly said “eff that noise” and that was the end of it.

But anyway, I had an absolute blast on the show floor. No complaints here. :)